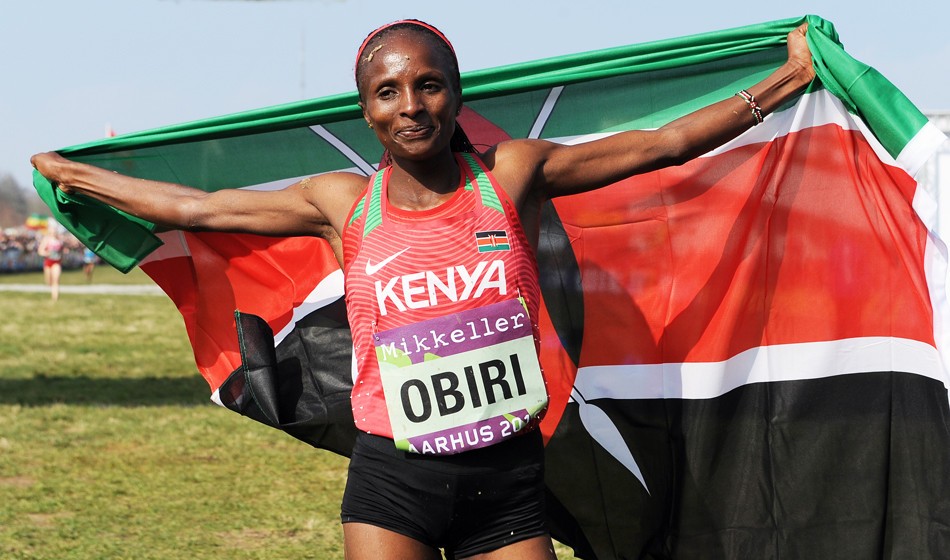 Hellen Obiri created history by becoming the first woman ever to win senior individual IAAF world indoor, outdoor and cross country gold medals when she strode to victory in Aarhus.

In what was her first international cross country event, the Kenyan showed impressive control from the front of the field for the majority of the race on the perilously difficult course, pushing the pace just when she needed to and maintaining her efforts on the sapping uphills.

Obiri clocked 36:14 for the 10.24km task at hand, coming home two seconds ahead of Ethiopia’s Dera Dida, who was followed by her compatriot Letesenbet Gidey in 36:24.

It was the Kenyan duo of Obiri and steeplechase world record-holder Beatrice Chepkoech who were at the head of affairs early on and leading a large group when completing the first of five laps.

That contingent was whittled down to just five athletes during the course of the following lap, with Dida, Gidey and Ugandan Peruth Chemutai also making their presence felt.

Chepkoech was the first to drop away and, with Chemutai also beginning to falter ever so slightly, the three eventual medallists started to put a little daylight between themselves and the chasing field.

Though never looking entirely comfortable on the climbs, Obiri still appeared ready to respond whenever she was threatened and regular injections of speed kept her firmly on the front foot.

She could never entirely shake off her pursuers and there was very little to separate the leading trio as they entered the closing stages. However, when the reigning world 5000m champion called on her finishing speed, she put the result the beyond doubt as she charged down the finishing straight to break the tape.

“I decided to do the cross country because it was the only medal I was missing in my career and I said to myself ‘this is the last chance I have’,” said the 29-year-old.

She added: “I thought this would be my first and last (international) cross country, so I decided to work, work, work extra hard.

“I’m used to racing flat courses, without mud, so I can say it’s the best cross country I’ve ever done. It was difficult and definitely the hardest one, too.”

Behind her, European under-23 champion and home favourite Anna Emilie Moller responded to the support of the Danish crowd and was the first European home, in 15th place, thanks to a strong finish.

With the first four athletes to score, the British women’s team came fourth behind winners Ethiopia, as well as Kenya and Uganda.

Kate Avery was the first Briton home, hanging on to achieve her aim of a top 30 place with 30th, while Mhairi Maclennan moved her way impressively through the field for 32nd, trials winner Jenny Nesbitt came 34th and team captain Jess Piasecki (36th) completed the scorers.

Pippa Woolven, who was not selected for the British team but made her own way to Denmark and ran in a vest featuring event sponsors Mikkeller, did not feature on the official results but finished between Nesbitt and Piasecki.

Multiple Euro Cross medallist Avery said of the course: “There were certain parts when I thought my legs were going to give way but, when it came to the hills, in my head I kept saying ‘jog, jog, jog’ and it seemed to work because others weren’t. I’m really happy to be the first Brit home, I had the top 30 in my head when I saw the course so I’m really pleased I did that well.”

Piasecki added: “There are no other words to describe that course other than a monster. On the first lap I thought ‘I feel OK here’ even though I told myself not to go too hard. I let some people go through but you can’t rehearse for a challenge like that.

“I’m happy I came through because normally I die a death and managed to take some positions on the final lap and stuck it out for the team. The girls had storming runs.”