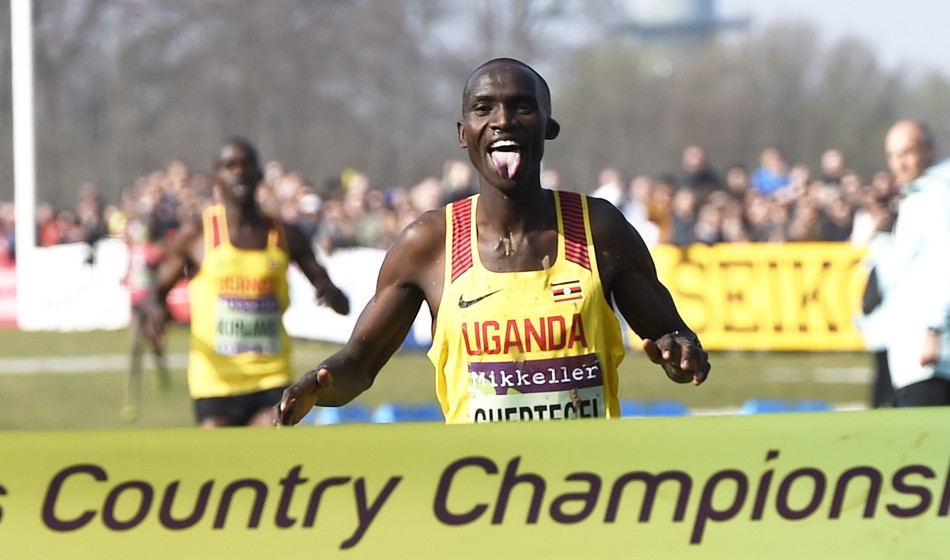 Two years ago on home soil he dramatically faded from first to 30th on the last lap as Kamworor scorched past him to take his second World Cross crown. But, racing on a sunny Saturday afternoon on a brutal course on the outskirts of Aarhus, he shrugged off a minor illness and enjoyed redemption as he clocked 31:40 over the 10km course to beat fellow Ugandan Jacob Kiplimo by four seconds, with Kamworor a further 11 seconds back.

“If there was really anyone who wanted gold today, it was me,” said Cheptegei, when asked what victory meant to him following his ‘Dorando Pietri moment’ at the previous world cross in Kampala where went from enjoying an 11-second lead to staggering home on rubber legs more than a minute-and-a-half behind the winner.

Organisers billed the 2019 championships on a devilish course at the Moesgaard Museum as a search for the world’s toughest runner. Cheptegei is a worthy recipient of that unofficial title, too, especially as he defeated not only Kamworor and challenges that included a mud pit, sand section, water splash and, most of all, relentless hills, but also some ill health.

Talking after the race, the 22-year-old casually mentioned he’d had “a problem with flu and cold in the last three days”.

“If there was really anyone who wanted gold today, it was me,” says World Cross winner Joshua Cheptegei, referring to his 1st-to-30th result in 2017. #Aarhus2019 pic.twitter.com/Zy6getZIF7

If so, it was a phenomenal achievement to beat not only 2017 world junior cross-country champion Kiplimo into second and Kamworor into third but Aron Kifle of Eritrea, Selemon Barega of Ethiopia and Rhonex Kipruto of Kenya – a trio of world-class runners who completed the top six.

A few months after his collapse at the world cross in Kampala, Cheptegei won silver behind Mo Farah in the 10,000m at the IAAF World Championships in London. As he prepares for the Virgin Money London Marathon, the Briton will no doubt have been among the thousands of keen spectators following the event online as Cheptegei claimed one of the few major titles that has eluded Farah during his great career.

Cheptegei, who also won Commonwealth 5000m and 10,000m gold in Australia last year, attributed his success on Saturday to gaining more experience in the past two years. He also paid tribute to Kamworor and world marathon record-holder Eliud Kipchoge, with whom he used to train in Kenya.

It helped, too, that he was brought up in a hilly region of Uganda and he had actually checked out the Aarhus course at the beginning of the winter to get an idea of how hilly the ground was.

“Everything on the course is a killer,” said the winner, so one can only imagine how many of his rivals felt. “I’d really prepared for this race. I don’t speak about my training before the race but now I will post details of it on my Instagram. The success is because of my manager Jurrie van der Velden and my coach Addy (Ruiter). They are my magicians.”

On his comeback from the 2017 World Cross, he said: “A lot of things have changed between then and now. I had less experience back then. I have grown as a senior now and am stronger.”

Africans were to the fore from the start. But as the race reached its climax the lead pack whittled down to just Cheptegei, Kiplimo and Kamworor and, as they negotiated the last of five laps, the Ugandan duo pulled away.

“I realised gold was possible in the last two kilometres and that I was in contention to win,” Cheptegei said. “It wasn’t easy for me with a lot of flu and cold but I had to endure and if I could stay with the group until the last one-point-something kilometres then I would be a potential winner.”

Kiplimo said: “I am a front runner and don’t like running behind. I was trying to push the pace. I was not really expecting to win but wanted to be on the podium. In the last kilometre I was very tired and just followed Cheptegei.”

Cheptegei described Kiplimo as his brother and Kamworor as his friend and the Kenyan was equally polite. “The course was really tough, especially on top of the roof,” said Kamworor. “I’m satisfied with bronze. I was aiming for gold but I gave it all and I have to be happy with that. There is always a next time so I will keep focused and move on to the next one.”

“I’m really chuffed with that,” said Dever of his performance. “My aim at the start was to conserve to really conserve my energy on the first lap. That course was so unforgiving.

“Pretty much everyone I went past, I stayed past. I think I judged that pretty much as well as I could have done.”

First European runner home was Robel Fsiha, an Eritrean-born athlete who moved to Sweden five years ago. Only 40th in the European Cross Country Championships in Tilburg, the 23-year-old excelled on Aarhus’ rollercoaster course to place 17th.

Close behind in the battle to be first European was Ouassim Oumaiz in 20th – a Spanish runner who finished runner-up to Jakob Ingebrigtsen in the under-20 race in Tilburg. Completing a great day for Oumaiz, it was his 20th birthday as well.