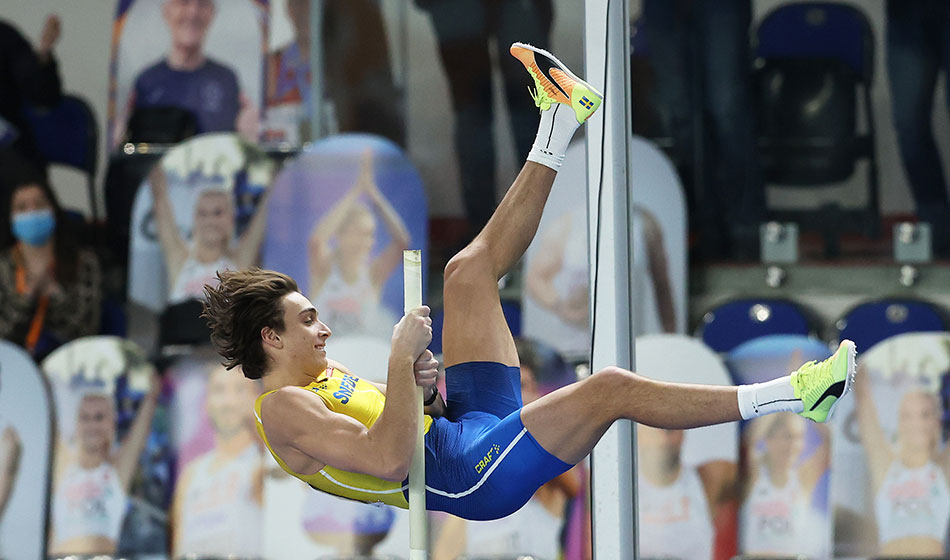 It’s easy to forget that world record-holder Monto Duplantis is still only 21 years of age.

The European outdoor champion, who was the youngest of a fairly youthful field, won his first major indoor title at the venue where he first broke the world record last year.

He was the last of the eight athletes to join the competition, entering at 5.60m, and he was still in the lead when he cleared 5.80m at his first attempt.

Once over 5.85m at his first attempt he was out on his own and he sealed his overwhelming superiority with a second-time clearance of 6.05m which broke the championship record.

Duplantis then had three attempts at a world record height of 6.19m (his current mark of 6.18m was set in Glasgow just over a year ago), with his second attempt easily being the best of the three.

“I was battling with Lavillenie – not Renaud but Valentin,” he said.  “I wanted the championship record but the gold was the important thing. I wanted to beat Renaud, even though he was not here, and jumping six metres is still special.”

When the AW team were putting together our European Indoors preview, we thought an athlete named Lavillenie would take the silver – but we certainly didn’t anticipate it being the younger brother Valentin.

Renaud, who was in superb form during the previous week with a 6.06m vault, was a late withdrawal because of injury but the family still stayed in the medal hunt.

Valentin did not have a perfect competition, failing his first attempt at 5.50m and then only only clearing 5.70m at the third try, which left him down in fifth place with Duplantis still to jump.

However, a 5.80m PB-equalling first-time clearance moved him all the way to second place, which proved sufficient to take the silver medal.

Poland’s consistent Piotr Lisek, who only cleared 5.80m at the third attempt to equal his season’s best, took the bronze medal.

The Frenchman said: “Renaud not being here is sad and we should have both been on the podium today but one day it will happen.”

Three athletes cleared 5.70m, with Oleg Zernikel, Ersu Sasma and Menno Vloon all successful at the height, though as the latter cleared 5.96m in his previous competition it was a major disappointment for the Dutch record-holder on a day when the nation’s 4x400m squads struck gold.