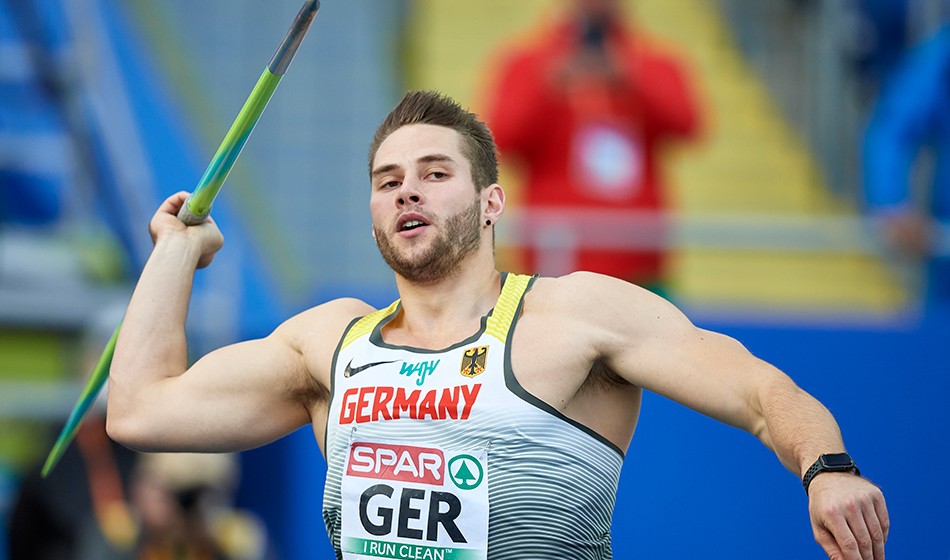 German javelin talent goes close to world record with 96.29m in Poland as Britain leads the competition at the end of the first day

It just keeps getting better for Johannes Vetter. The in-form German has enjoyed a superb season so far and on the first day of the European Athletics Team Championships in Chorzow, Poland, he opened his javelin contest with a mighty 94.24m before improving moments later to 96.29m.

The 28-year-old from Dresden smashed the championship record and set a world lead with both throws. What’s more, his 96.29m was the third longest mark in history behind the 97.76m he set himself at the same venue last September and, of course, Jan Zelezny’s long-standing world record of 98.48m set in Jena a quarter of a century ago.

Such was the quality of Vetter’s performance, runner-up Marcin Krukowski was more than 11m adrift with 85.12m and third-placed Odei Jainaga threw a Spanish record of 84.50m but, again, was well beaten.

Vetter withdrew from the competition after two throws as he felt an adductor twinge. He helped the German team to third place at halfway in the biennial competition too – and they would have been leading as well if they had not failed to finish in the women’s sprint relay.

Nielsen clocked 55.59 in her race and said: “This means a lot for me. On my first senior call-up I got injured and couldn’t run, so I’m so happy to get the win at this one.”

Maximum points for the Brits! 🙌

Victory for @LinaFJNielsen in the 400m hurdles in Silesia! #ETCH2021 pic.twitter.com/btHHDlNuVO

Baker ran 2:00.95 to beat Elena Bello of Italy. The Briton had also raced less than 48 hours earlier in Manchester and said: “It is great to win it for the team. I just love the championships vibe and every time I pull on the vest, it is such a good feeling.”

“I felt good to whole way round but it started to bite a bit of the last lap. I just knew if I could hold on to the girl in front it would be anyone’s game.”

There was also a fine win by the British women’s 4x100m team too as Desiree Henry anchored the quartet to an emphatic victory in 43.36.

It was in this event that German hopes took a dive. They failed to finish after a final exchange mix-up but in contrast the German men’s squad took a commanding win in 38.73.

Vetter aside, Germany enjoyed a win in a tactical men’s 1500m with Robert Farken clocking 3:56.64 with a 50.8 last lap to beat Jesus Gomez of Spain.

Poland came into the event as defending champions on home soil and posted a number of individual wins. Pia Skrzyszowska, for example, clocked 11.25 (1.3) in the women’s 100m to beat Lisa Mayer of Germany with Imani Lansiquot of Britain third, also in 11.27.

The first part of a double in Silesia?

Only 20, Pia Skrzyszowska won maximum points for hosts Poland 🇵🇱 in the women's 100m…but only just! 💨

Steeplechaser Alicja Konieczek also triumphed for Poland in the women’s steeplechase with 9:35.63, while Norbert Kobielski took the men’s high jump win on countback from Britain’s William Grimsey with 2.24m.

The small crowd in the Silesian Stadium also enjoyed a win in the women’s 400m with Natalia Kaczmarek in 51.36.

The European Team Championships is notorious for its ups and downs, though. These included, for example, European indoor 800m champion Patryk Dobek of Poland finishing only sixth in the 400m hurdles. 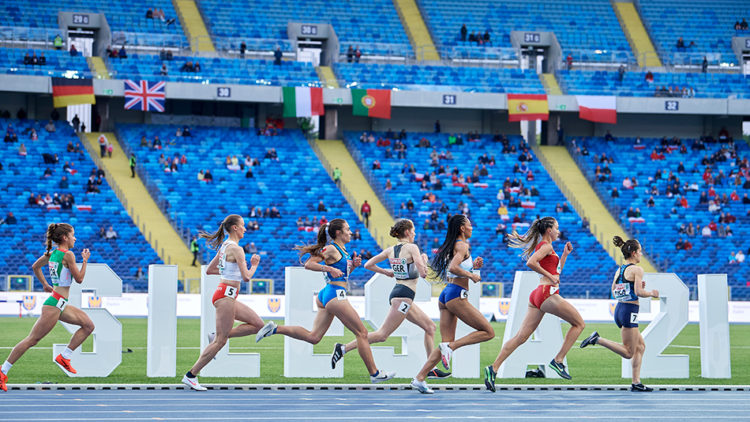 Italy have brought a strong team to Silesia too and they earned maximum points through Roberta Bruni with 4.45m in the women’s pole vault, Alessandro Sibilio with 49.70 in the men’s 400m hurdles, Filippo Randazzo with 7.88m (-0.5) in the men’s long jump.

Perhaps their stand-out performer, though, was Yeman Crippa, who chose to race here instead of defending his European Cup 10,000m title in Birmingham next weekend and he was rewarded with a championship 5000m record of 13:17.23.

Hugo Hay of France and Carlos Mayo of Spain were close behind with Britain’s Tom Mortimer clocking a PB of 13:28.12 in fourth.

France are historically strong in the sprints and so it proved in Silesia when Mouhamadou Fall won the men’s 100m in 10.28 (-0.5). Thomas Jordier, meanwhile, gave France maximum points in the men’s 400m as he beat Britain’s Cameron Chalmers into second with 45.65.

Portugal got in the mix too with a win in the women’s discus courtesy of Liliana Ca with 61.36m. Spain did not enjoy any event victories, though, but there is still all to play for in day two.