Jeremiah Azu stormed to a shock victory over his better-known rivals in the men’s 100m final at the Müller UK Athletics Championships at Sportcity on Saturday (June 25). His rivals didn’t think it was so much of a surprise, though, as they sang his praises afterwards.

Azu, 21, clocked 9.90 to beat Prescod’s 9.94 and Hughes’ 9.97 as Jona Efoloku and Harry Aikines-Aryeetey were fourth and fifth in 10.12 while former winner Ojie Edoburun was disqualified for a false start.

The runners were helped by a tailwind of 2.5m/sec but nevertheless it was a high quality competition to see three men inside 10 seconds. The race also saw the Cardiff Athletics man become the first Welshman since Ron Jones in 1969 to win the British 100m title.

There is no doubt that Azu is a rare talent. He first realised his talent when he ran just outside 11 seconds for 100m in Year 11 at school off no training. He then played football for a while. “On the wing, of course!” he says. More recently he has taken athletics seriously under the coaching guidance of former sprinter Helen James and last year won the European under-23 100m title in Tallinn.

This summer he won the 100m B race at the Diamond League in Birmingham and has a legal best of 10.16, which is frustratingly outside the 10.05 standard for the World Championships.

“In the semi-final I lost some forward momentum and I knew I had to get that second step right today in the final and I got out the blocks extremely well,” said Azu, who plans to run the 200m on Sunday too. “By the time I hit the 80m mark, I felt really relaxed and knew I was in the lead and I dipped for my life.”

Prescod and Hughes both looked pleased post-race, though. “Trials is all about qualifying and now it is time to go again,” said Prescod.

British 100m champ Jeremiah Azu is only in his 5th year of sprints training. He has a background in football. What position? “A winger … obviously!” pic.twitter.com/Zrsk3ByVvG

Matt Hudson-Smith proved one of the most emphatic winners of the day as the UK record-holder cruised to 44.92 in the blustery conditions to beat Tim Benjamin’s stadium record. Lewis Davey and Rio Mitcham finished a relatively distant second and third in 46.18 and 46.22 respectively. “I just wanted to get the job done and qualify,” said Hudson-Smith.

Tade Ojora successfully defended his 110m hurdles title in a tough race that saw Andy Pozzi finish fourth. The Windsor winner ran 13.27 with a 3.8m/sec tailwind as Joshua Zeller, the fastest on paper coming into the race, runner-up in 13.31 as David King was third in 13.38 and Pozzi fourth in 13.44.

Ojora, however, has yet to achieve the qualifying standard for the World Championships of 13.32. 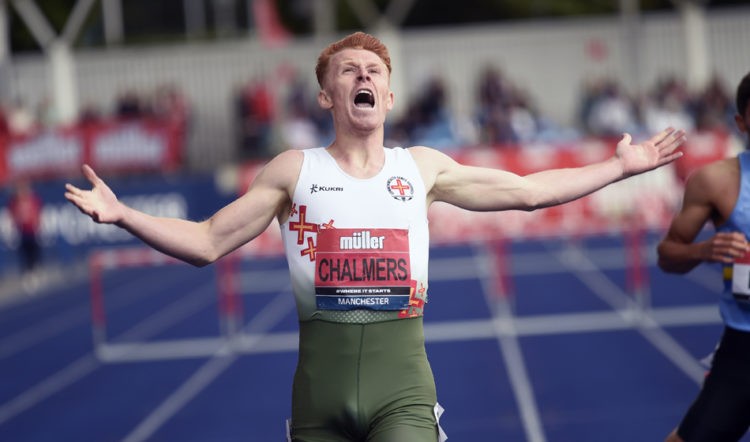 Alastair Chalmers was an impressive winner of the 400m hurdles as he clocked 49.21, easing down slightly, ahead of Chris McAlister in windy conditions.

In the ambulant 100m, meanwhile, Zac Shaw and Thomas Young continued their close rivalry with Shaw winning in 10.66 from Young’s 10.80.