Jakob Ingebrigtsen goes the long way round for 1500m gold 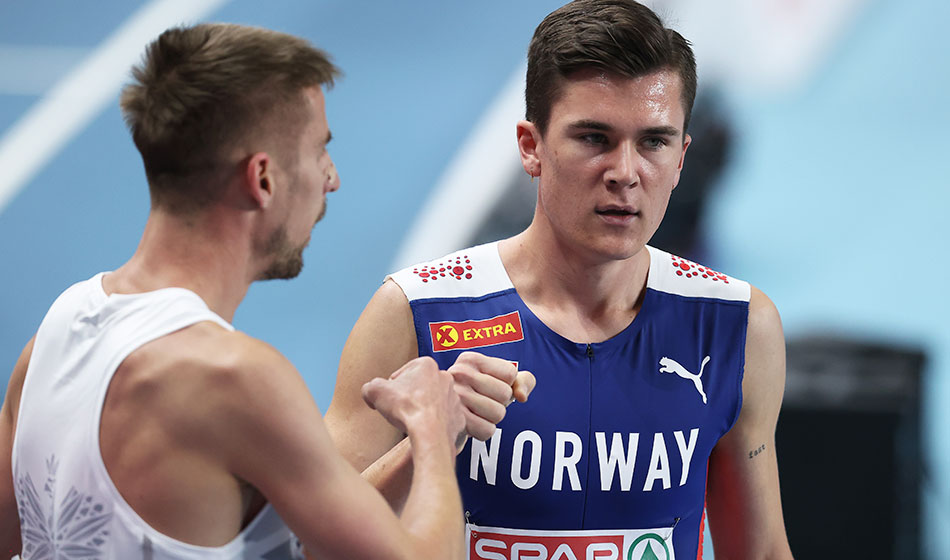 Day two of the European Indoor Championships ended with Jakob Ingebrigtsen eventually being crowned as the 1500m gold medallist after he was dramatically disqualified and then reinstated as the winner.

The 20-year-old had been in complete control of the final, coming home ahead of defending champion Marcin Lewandowski. However his performance was subsequently ruled out after he stepped off the track when jostling for position and seemingly being pushed by Poland’s Michal Rozmys in the early stages.

The Norwegian federation, which had been ready to celebrate the nation’s first ever European indoor 1500m gold, swiftly lodged a protest which was ultimately upheld.

For a while it had looked like Ingebrigtsen’s time of 3:37.56 would be stricken from the record books and that instead Lewandowski would be able to celebrate a fourth successive title thanks to his 3:38.06.

But the day ended with the European outdoor champion in top spot, the Pole having to settle for silver and Spain’s Jesus Gomez (3:38.47) taking bronze. An impressive late charge gave Britain’s Piers Copeland fifth in 3:39.99 while his compatriot and Doha world finalist Neil Gourley finished back in 12th spot with 3:45.99.

Ingebrigtsen had gone into the championships with much expected of him after setting a European indoor record of 3:31.80 last month in Liévin during a race which had left Lewandowski trailing five seconds behind.

There wasn’t quite the same gap this time but the Norwegian cranked up the pace and was clearly the better athlete on the night, avenging his defeat at the Pole’s hands in Glasgow two years ago.

Despite insisting he had done nothing wrong, Ingebrigtsen said he knew a disqualification was coming his way and suggested that 12 athletes was simply too big a field for the final.

“The rules are on my side, there is a paragraph saying if you’re pushed to the inside of the curb and it’s not your fault, it’s okay,” said Ingebrigtsen, who will now attempt to become the first male runner in European indoor history to complete a 1500m and 3000m double.

“There were just too many runners in the race. We talked with Michal Rozmys after the race – none of us was trying to shove the other one, it just happened when too many other guys were coming from the outside. I simply wanted to win the race.

“At the end I kept a safe distance to Marcin so that I could react if he tried to come back. But I knew a disqualification was coming.” 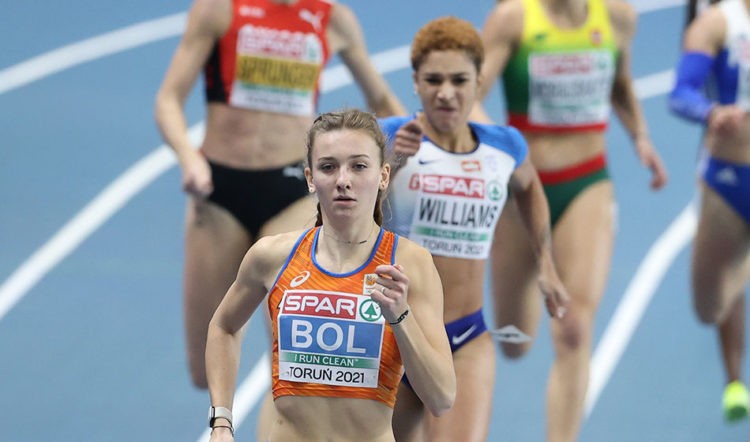 Earlier in the session, there had been a surprise in the men’s 400m as three-time world and European indoor champion Pavel Maslak only finished fourth in the opening semi-final with 46.70 and failed to progress.

The Netherlands’ Tony Van Diepen qualified fastest with a PB of 46.06. He will be joined in the final by fellow compatriots and heat winners Jochem Dobber (46.56) and Liemarvin Bonevacia (46.75).

Neither of the British athletes involved made it through, James Williams coming fifth in the opening semi-final with 46.94, while Lee Thompson was fourth in the second race with 47.42.

In the women’s 400m semis, Netherlands’ Femke Bol looked in imperious form as she qualified fastest for the final after winning the third heat in 51.17 ahead British captain Jodie Williams’ PB 52.09. Defending champion Lea Sprunger failed to qualify after finishing third in 52.64.

A Polish record of 51.34 saw Justyna Swiety-Ersetic also progress as she won the second heat ahead of the Netherlands’ Lieke Klaver (52.09).

Williams will be Britain’s only finalist as Jessie Knight missed out on qualification, clocking 52.22 for fourth in the second semi-final, while compatriot Ama Pipi was third in the opening heat in 52.54. 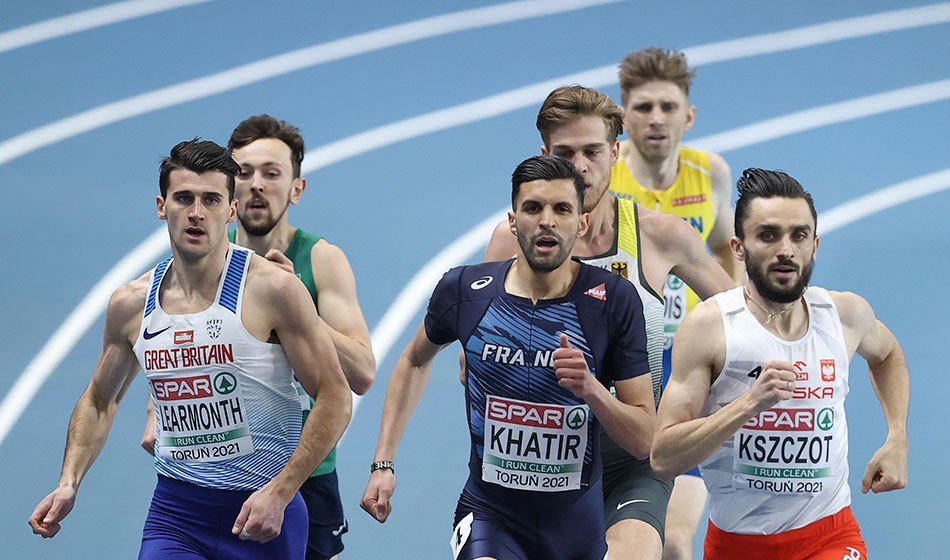 The men’s 800m competition got under way, with European silver medallist Andreas Kramer qualifying fastest for the semi-finals with his run of 1:47.55 in the fifth heat.

The quickest athlete going into these championships was Jamie Webb and the Briton who has his eyes on succeeding Tom McKean as the last British male winner of the European Indoor title progressed safely from the final heat in 1:47.82.

Compatriot Guy Learmonth also went through after winning heat four in 1:49.66 ahead of three-time champion and home favourite Adam Kszczot (1:50.53). There was progress, too, for Ireland’s Mark English who was third in the second heat with a time of 1:49.79 despite a mid-race stumble, while English’s team-mate Cian McPhillips, 18, also qualified with 1:49.98 for second in the third heat.