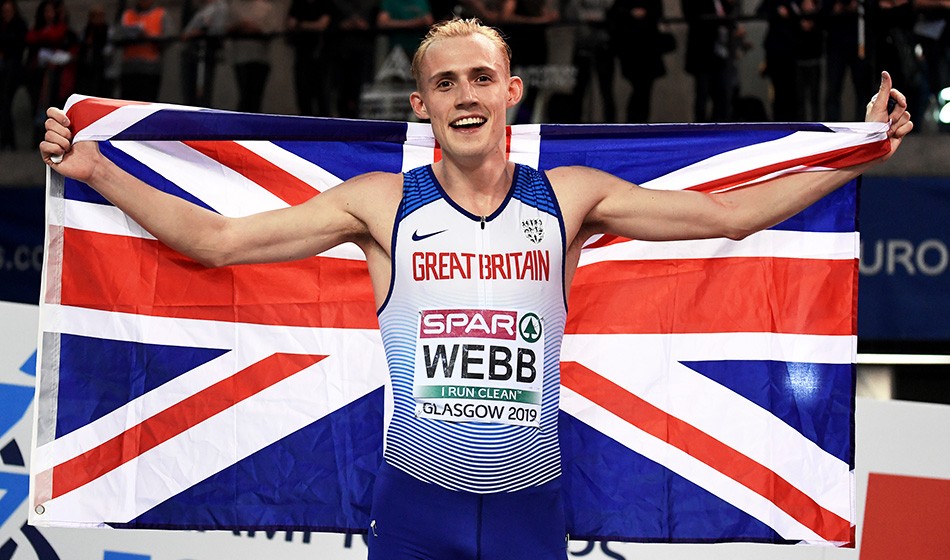 It has been 31 years now since Tom McKean won European Indoor 800m gold. That victory in Glasgow’s Kelvin Hall remains the last time a British man landed that particular prize.

Jamie Webb has already been involved in a piece of middle-distance history this year, however, and feels he is now in prime position to consign that statistic to the past.

The 26-year-old arrives at this year’s championships as a very different athlete to the one who landed silver two years ago – also in Glasgow – at the Emirates Arena.

Right behind him, however, Webb also took a massive leap forward thanks to his performance of 1:44.54 – a time which was also inside Coe’s mark of 1:44.91 and moved him to ninth on the all-time rankings list.

Giles has opted not to compete in Toruń and though he will face stiff opposition in the likes of three-time winner and home favourite Adam Kszczot, Spanish defending champion Alvaro de Arriba and Sweden’s Andreas Kramer, Webb is very much aware of the window of opportunity which has opened up in front of him.

“I went in two years ago and expected a performance in myself but didn’t quite believe,” he says of his previous European Indoors experience. “This time I go into it as one of the favourites believing I can perform at that level. I believe I can face up against anyone and give them a race. I have high expectations of myself.

“All my weaknesses have become a lot stronger and I’m a rounded athlete as an 800m runner. The first job is to get through the heats. Come that final, it’s all to play for. I’m sure he [Kszczot] classes himself as the favourite but I’m sure he’s very beatable.”

Webb’s progress so far this year has been made all the more impressive given not just the challenges brought on by the pandemic but also the stress fracture he endured to his femur in April of last year.

“It was definitely a challenging year,” he says. “In April I got my injury and it coincided with the Olympics [being postponed]. I was blessed that I could take the time to really recover.

“That was one the best things I’ve done – to really take a back seat. I had two to three months of doing hardly any exercise and it gave me a really nice platform to build up from.

“From July I came at the sport with a slightly different outlook of pushing my body when I needed to and taking a more laidback approach at times and recovering properly – I think that’s been one of the biggest reasons for my breakthrough this year.

“I’m coming at it from a more mature perspective now.”

The subject of footwear technology has hung particularly heavily in the air following some of the recent track performances. Webb, an Adidas-sponsored athlete who will compete in the old version of their spikes until the latest ‘super’ model is released in May, has been forthright on the topic, admitting to being “stunned” by how fast the new spikes are.

Is there a danger that the discussion will overshadow this weekend’s proceedings?

“I hope not,” he says. “There are a lot of phenomenal athletes here and it’s about championship running now. The beauty of this sport is that it’s about racing and times are only important to a certain extent. There’s so many elements in an 800m, so many things that can go wrong tactically. It’s completely different to a time trial and I’m really looking forward to a good, competitive championships.”

Webb is part of what is a burgeoning British middle-distance scene right now. Laura Muir, Jake Wightman, Giles, training partner Daniel Rowden, teenage talents Keely Hodgkinson and Max Burgin, Jemma Reekie, Keely Hodgkinson … the list of names goes on and is as impressive as it is long.

However, the man who is guided by his father Adrian and former European Indoor 1500m gold medallist Matt Yates insists there is work to be done before any headlines about a ‘golden era’ can deservedly be written.

“I think we’ve got to win things for it to be a golden era, to be honest,” he says. “We’re in a very good spot and you definitely can’t take the foot of the gas.

“I spoke with Elliot about it and I think that’s definitely what’s pushing us forward. What I’ve done so far indoors this year – running 1:44.54 – isn’t necessarily going to be enough to get me on the Olympic team.”

Getting into that gold medal-winning habit may well start in Toruń. Webb’s recent experience of the track and a race in which he “learned a lot” have provided a perfect confidence-booster for a challenge which he hopes will result in him succeeding the aforementioned McKean in the history books.

“I met Tom two years ago in Glasgow actually and he said ‘well done’ to me,” says Webb. “It would be really good to match that [800m gold]. Matt Yates was reminding me of his gold, too, so I’d like to be able to say I’ve won one as well.”