Jake Wightman enjoys run of his life at Bislett Games 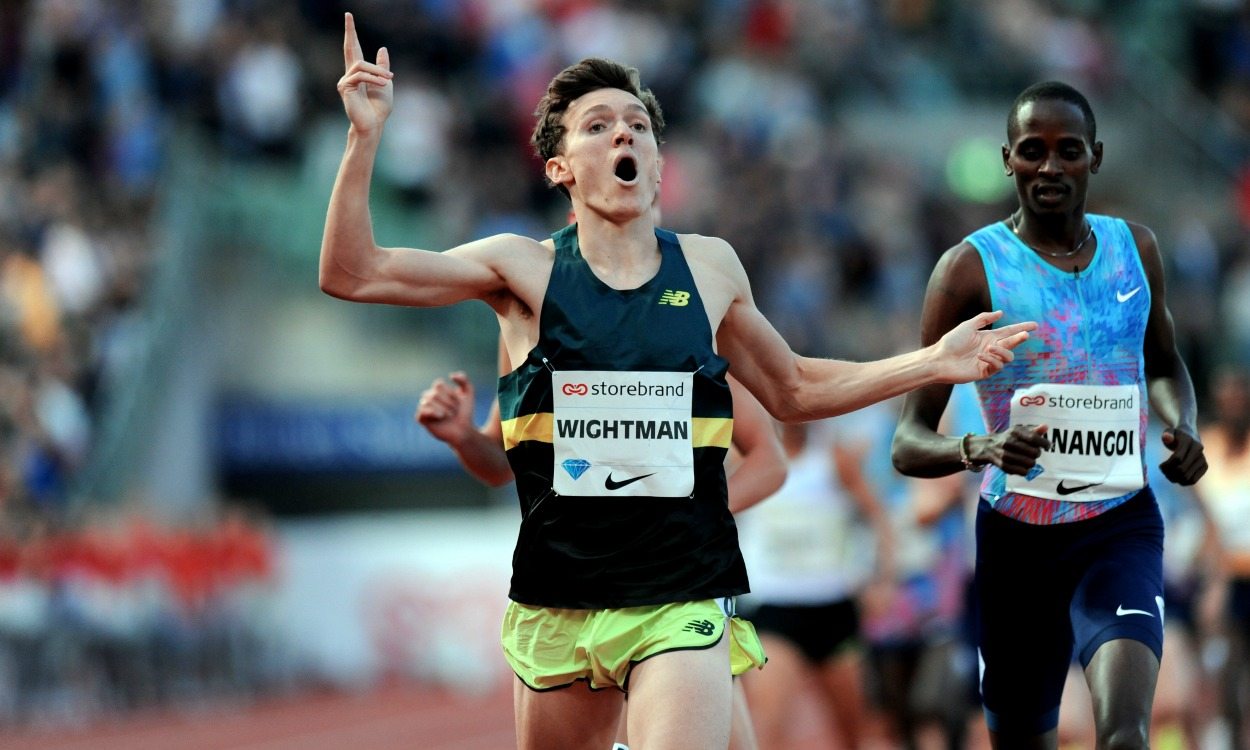 Jake Wightman scored a dream metric mile victory at the Bislett Games. With the classic imperial distance restricted to under-20 runners this year, the 22-year-old Briton produced an inspired performance over 1500m to win in a PB of 3:34.17.

Wightman beat Elijah Manangoi, the 2015 world silver medallist from Kenya, into second as a quality line-up finished in his wake.

Marcin Lewandowski, the former European champion from Poland, was third. Filip Ingebrigsten, the reigning European champion and home crowd favourite from Norway, was fourth. Britain’s 2016 Olympic finalist, Charlie Grice, was sixth. Silas Kiplagat, a 3:27 man from Kenya, was seventh and Ayanleh Souleiman, the former world indoor champion, was back in eighth as Wightman took a number of scalps.

Talent runs in Wightman’s family. He is the son of 2:13 marathoner Geoff and 2:31 marathoner Susan Tooby and the young runner has been in great form so far this summer but his recent PBs did not suggest anything quite as dramatic as this might happen in the final event of the programme.

Norwegian fans had plenty to cheer elsewhere as Karsten Warholm scored a thrilling 400m hurdles victory in a national record of 48.25.

The 21-year-old was level with Olympic champion Kerron Clement of the United States coming into the home straight but Clement faltered and Warholm capitalised to press home his advantage.

It was a remarkable performance for an athlete who used to specialise in combined events and won the world youth title in octathlon back in 2013.

In 2014 he finished 10th in the decathlon at the World Junior Championships but began to focus on 400m hurdles, reaching the semi-finals at the Olympics last year, and in 2017 has gone from strength to strength.

With Clement fading, Yasmani Copello of Turkey was runner-up to Warholm with Thomas Barr of Ireland third. Fittingly, 400m hurdles legend Ed Moses was a special guest in the stadium to watch as the excitement unfolded.

Oslo organisers made the controversial decision to restrict the historic Dream Mile to under-20 men only with seniors tackling a metric mile. But the decision paid off as the Norwegian crowd celebrated a home winner when Jakob Ingebrigtsen, 16, has followed his recent 3:58.07 mile in Eugene by winning at Bislett in 3:56.29.

In the men’s high jump, Mutaz Essa Barshim of Qatar was in brilliant form with a meeting record and world lead of 2.38m ahead of Bohdan Bondarenko’s 2.29m, while Britain’s Robbie Grabarz cleared a best of 2.25m for seventh.

Caster Semenya enjoyed another dominating 800m win as the South African overtook Francine Nyonsaba in the home straight to clock 1:57.59. In a race that saw the top five break two minutes, Lynsey Sharp of Britain was eighth in 2:00.41.

Tianna Bartoletta overtook long-time leader Darya Klishina to win the long jump with 6.79m. The event featured a trio of Brits with Shara Proctor the leading performer in fourth with 6.53m followed by Lorraine Ugen in sixth with 6.50m and an out-of-sorts Jazmin Sawyers 10th with 6.20m.

Pamela Dutkiewicz of Germany took the 100m hurdles in 12.73, while Britain’s Tiffany Porter was fifth in 12.93. Yarisley Silva of Cuba won the pole vault with a best of 4.81m.

Dafne Schippers finished first in a controversial 200m in 22.31. She appeared to make a false start but appealed to the officials and was allowed to begin the race and then coasted clear to celebrate a win on her 25th birthday. Soon after the race the Dutch sprinter was marked as a DQ in results as the victory went to Murielle Ahoure, but Schippers was ultimately reinstated as the winner after an appeal.

Schippers sizeable winning margin was in stark contrast to the close finish that was seen in the women’s 3000m steeplechase as Norah Jeruto of Kenya pipped Sofia Assefa in 9:17.29 after the Ethiopian had earlier been tripped by the pacemaker.