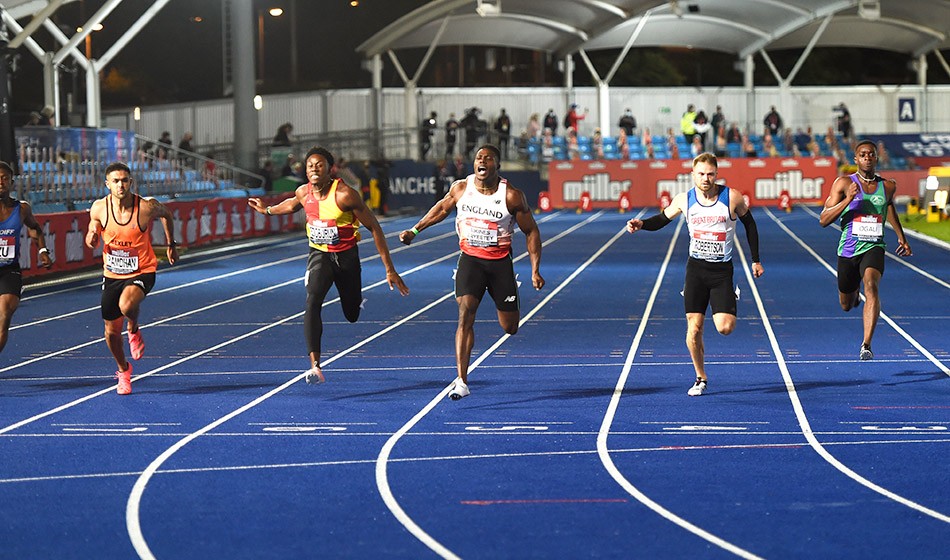 Harry Aikines-Aryeetey left it late in more ways than one to win his first British title. Not only did a closing surge see him across the finish line first but his 100m victory also came during his 12th appearance at the national championships.

The wait certainly appeared to be worth it, though, as the 32-year-old savoured his success. He got his timing just right at the Manchester Regional Arena to come through in a season’s best time of 10.35 (+1.2m/sec), outsprinting defending champion Ojie Edoburun (10.43) as Tommy Ramdhan clocked 10.44 for bronze.

Ahead of this event, much of the attention had surrounded the athletes who had opted not to compete at SportCity. Aikines-Aryeetey, however, opted to accentuate the positive.

“This means so much,” said the Commonwealth 4x100m champion, who had been fifth-fastest in the semi-finals and was racing in only his second competition outdoors this year. “British sprinting is at its peak at the moment. There are many sprinters not here but we are here and doing them proud.

“I have won and I am British champion, for the first time after all these years. It bodes well for next year. I am very stubborn, I am not going away.

“I am enjoying life and doing more things off the track but I am working hard and lockdown has taught me you have to persevere. I have won because of my mental attitude, I think.”

There was a first-time winner in the women’s 100m, too, as Imani-Lara Lansiquot also came through in the closing stages to take gold. After a strong start from the young British indoor 60m champion Amy Hunt, Lansiquot kept her cool and clocked 11.26 (+2.1m/s) for victory. In doing so she overhauled Hunt, who ultimately finished third in 11.35, and the second-placed Kristal Awuah (11.34).

There was a great tussle in the women’s 400m wheelchair race as world champion Sammi Kinghorn pushed the early pace but five-time Paralympic champion Hannah Cockroft came through off the final bend to clock 60.18. Kinghorn was second in 62.20 ahead of a personal best of 62.90 from Melanie Woods.

In the sprint hurdles finals, Cindy Ofili retained her title over 100m but had to see off a stern challenge from the impressive teenager Lucy-Jane Matthews to do so. Ofili clocked 13.16 (+1.5m/s) to keep her young challenger at bay, Matthews coming home with a personal best of 13.20 which was also a British age-17 best. Heather Paton was third in 13.60. 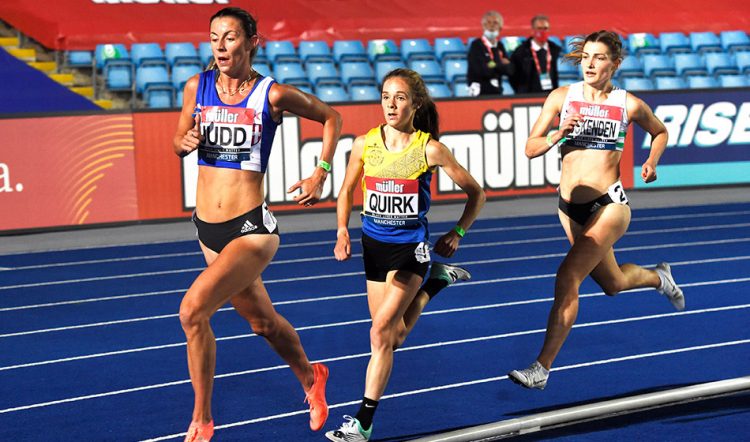 Jess Judd on her way to 5000m victory

The last final of the day was the women’s 5000m, with Jess Judd landing her first British Championships gold in convincing fashion. Bronwen Owen had made much of the early running but Judd took control not long after halfway and stormed away in the closing stages.

“I am so happy,” said Judd. “I thought I was in good shape but I have had no races so it was all a bit rusty. I didn’t want to take it on too early so I was happy when others did for me but I knew I’d need to push it on. I get really nervous mid race so I kicked and the last 500 was very hard. But I have never been in that position before so it was lovely to bring it home.”

In the women’s 400m, defending champion Laviai Nielsen qualified fastest for the final after winning the opening heat in 52.77, with Yasmin Liverpool (53.67) winning heat two. In the men’s event, reigning champion Lee Thompson was also a heat winner and also fastest of the day with 46.51. Alex Haydock-Wilson (46.81) and Efe Okoro (47.13) were the other heat winners.

Okoro was another athlete who had chosen to double up and also progressed in the men’s 400m hurdles. He was second behind Chris McAlister (51.45) after clocking 51.84, while Alastair Chalmers won the opening heat in 51.01.

Jessie Knight looks like being the one to beat in the women’s 400m hurdles final, the British indoor 400m champion  comfortably running the fast time of qualifying – 56.23. Hayley McLean got closest with 57.96, while Lina Nielsen won the opening heat in 58.39.

The 800m finals will be keenly contested on Saturday. Men’s favourite Jake Wightman led home heat three in 1:53.04, while Dan Rowden looked impressive in winning the opening heat in a time of 1:49.52 and Yusuf Bizimana (1:50.10) won heat two.