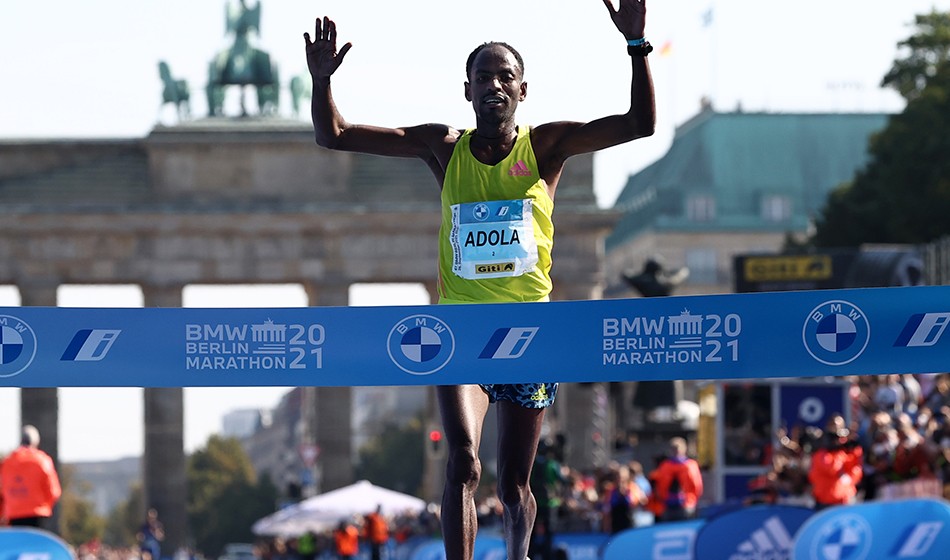 The 30-year-old Ethiopian wins in 2:05:45 ahead of Bethwel Yegon and Kenenisa Bekele while the women’s victory goes to debutante Gotytom Gebreslase

Four years ago in Berlin the Ethiopian runner Guye Adola showed his talent by clocking what was, at the time, the world’s fastest-ever debut marathon of 2:03:46 to finish runner-up to Eliud Kipchoge.

Yet on Sunday (Sept 26) in the German capital he once again demonstrated his ability by scoring the first marathon victory of his career against a field that included Kenenisa Bekele.

After blasting through the first half in a sizzling 60:48, Adola and most of his rivals slowed dramatically to run the second half in 64:58.

But the basic results barely tell the story of a crazily unpredictable men’s race where the leading positions see-sawed throughout and where the final positions were undecided until the closing stages by the Brandenburg Gate.

On a day when Germans were out in force to vote in their general election to find a successor to Chancellor Angela Merkel, the roads of Berlin featured the race to win one of the world’s most iconic marathons on arguably the event’s fastest known course.

The race was set up for Bekele to challenge Kipchoge’s world record. Two years ago in the same event he clocked 2:01:41 to miss the mark by two seconds. Now aged 39, his team suggested he was in similar or even better form but as halfway was reached the Ethiopian veteran found himself adrift of the leaders by 12 seconds although still, remarkably, on world record pace himself.

The 13.1-mile split of 60:48 is the fastest ever seen in a marathon race but the runners would soon pay the price as temperatures in the city began to rise following the 9am start.

Adola led with Tesfaye Lencho, Abraham Kipyatich and Philemon Kacheran but by 25km Bekele was starting to rejoin the lead group and at 30km he was back in the lead. This was largely because the leaders had slowed, however, as they passed 30km in 87:58 – more than a minute outside world record pace.

As Kipyatich and Lencho were dropped, it was down to Adola, Bekele and Kacheran. But by 35km Adola was pushing the pace with a small gap ahead of Bekele as Kacheran began to fall back.

Adola forged ahead but behind Yegon was enjoying an incredible surge through the field and at 40km he joined Adola in the lead.

The Kenyan, whose PB prior to Berlin was 2:08:35 from the same race two years ago, breezed past Bekele and at this stage looked capable of surging past the exhausted long-time leader Adola.

But Adola rallied and surged clear again in the final mile to build up a near half-minute lead approaching the finish.

“I didn’t think I would win but I was always thinking that it would be a nice race to compete against Bekele,” said Adola, who added his feet felt scorched with the heat during the race as roadside temperatures rose.

After the furious early pace, Adola’s eventual winning time did not even make the top 60 times in Berlin history. However fans were treated to a great race.

Gotytom Gebreslase made it an Ethiopian double by winning the women’s race too. Competing over 26.2 miles for the first time, the 26-year-old enjoyed a decisive win in 2:20:09. 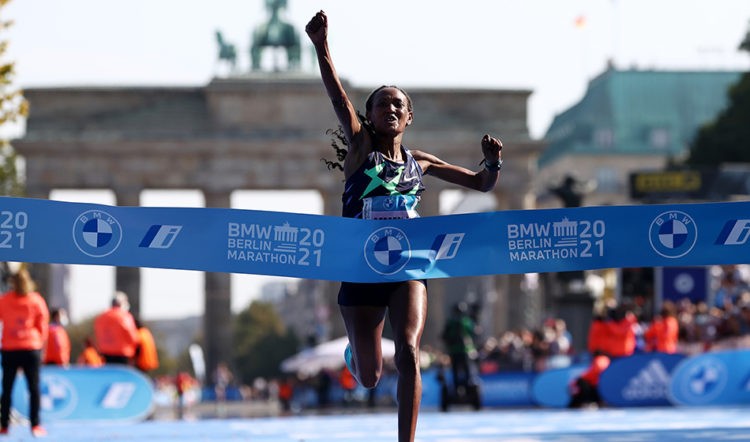 Runner-up was fellow Ethiopian Hiwot Gebrekidan in 2:21:23 as another Ethiopian, Helen Tola, was third in 2:23:05.

As in the men’s race, the women’s times were not quite as quick as hoped and Gladys Cherono’s course record of 2:18:11 from 2018 survived.

There were fewer Brits in Berlin than usual due to the pandemic but first across the line was Matt Clowes of Cardiff who ran 2:18:55.

Manuela Schär took her fifth straight Berlin Marathon win in the women’s wheelchair race as she clocked 97:31 to beat Madison Rozario by a minute with Tatyana McFadden third.

There was a Swiss double, too, as Marcel Hug won the men’s race in 84:03 from Daniel Romanchuk and Brent Lakatos. 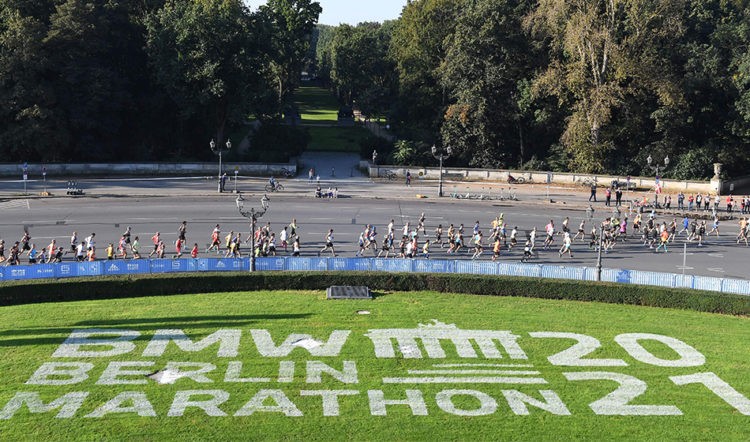