Fast times for Mboma and Thompson-Herah at Diamond League final 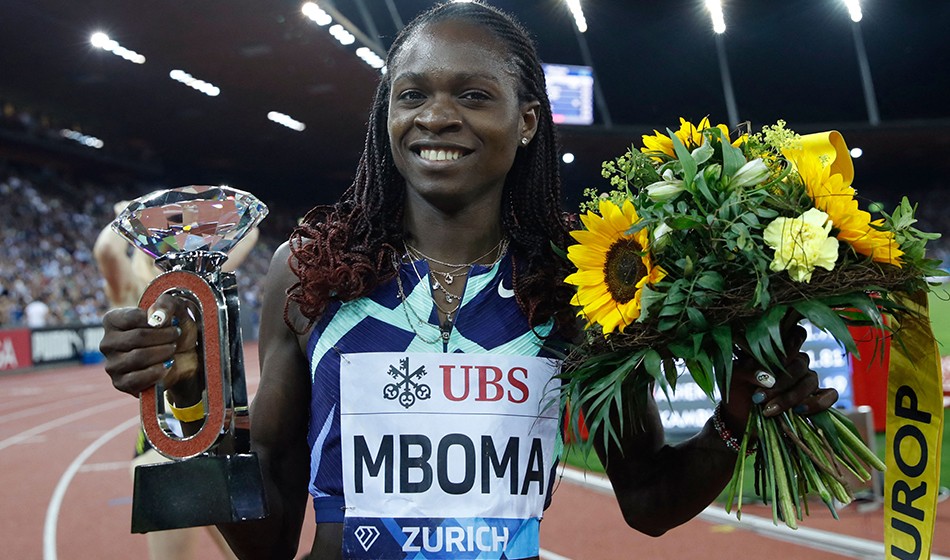 The Wanda Diamond League final, held at the Weltklasse meeting in Zurich on Thursday night, lived up to its billing as the greatest one-day meeting in the world with one stunning women’s track event after another.

The 100m might not have been as quick as the Olympic final – Elaine Thompson-Herah running a superb meeting record 10.65 compared to her 10.61 in Japan – but the depth was comparable as fifth place clocked 10.94 compared to 10.97 in Tokyo.

Dina Asher-Smith, who is improving race by race after her injury struggles this summer, started quickly and was level with the Jamaican until 60m as Thompson-Herah began to pull away. The Briton’s run of 10.87 in second place was not only a season’s best but also equal to her third-best ever time, only bettered by her Doha silver (10.83) and Berlin European gold (10.85).

It was close for third, with well-matched rivals Ajla del Ponte and Daryll Neita sharing 10.93 (the Swiss edging it by four thousandths of a second) just ahead of Mujinga Kambundji’s 10.94.

This was the first time two British women had run under 11 seconds in the same 100m race as Neita again improved her PB.

Thompson-Herah said: “It has been a crazy season, a long one and a tiring one. I was so consistent because I was just keeping the faith in me and did not allow any negativity. I would describe this season with one word: amazing, yet with ups and downs.

“The audience was very warm and cheerful, I wish we had had so many people to cheer in Tokyo on the finish line. It was a long season but, next year, the world record is definitely on my mind.”

While the 100m saw a clear and dominant winner, the 200m was a superb battle that went to the wire and resulted in yet another world junior record for Christine Mboma.

Asher-Smith ran the best bend and led into the straight but, gradually, Olympic 100m bronze medallist Shericka Jackson edged ahead in what is her best event when she does not ease off in races prematurely!

This time, unlike her Olympic heat, she held her form and ran through the line. However, while Jackson finished fast, Mboma was faster. Her performance followed a familiar pattern of a relatively sluggish bend followed by an incredible straight and her time of 21.78 (0.6) was another world under-20, as well as African, record.

“When I crossed the finish line, I did not know that I had won,” said Mboma, who had to switch to the half-lap event from her favoured 400m earlier this summer due to DSD regulations. “Then I just saw my name and I was like: ‘Wow!’

“This season was quite tough and very busy. I did a lot of races so now I am feeling a bit tired. This trophy means a lot to me. I am glad I was able to run here and get this victory, but I still have some two more competitions in my schedule.”

Jackson was rewarded with a PB 21.81, edging her previous 21.82, while Asher-Smith held on to third in 22.19 just ahead of Kambundji’s 22.27 for her second top-three finish of the night. Britain took three of the top six places, with Neita completing a memorable evening with a PB 22.81, just ahead of Beth Dobbin’s 22.88.

“It’s been a great evening for me and I’m super happy. I was hoping for a slightly faster 200m but honestly, after running a 10.8 100m, I’m taking whatever!”@dinaashersmith on her night at the DL final in Zurich. #WDLFinal 🇨🇭 pic.twitter.com/0zAUoCCEkD

“It’s been a great evening for me and I’m super happy,” said Asher-Smith in what was her final event of the season. “I was hoping for a slightly faster 200m but, after running a 10.8 100m, I’m taking whatever.”

In the Brussels 800m, Olympic silver medallist Keely Hodgkinson narrowly lost to Natoya Goule and the Zurich race looked like following a similar pattern. Noelle Yarigo led through 400m in 57.11 before Goule took command down the backstraight and reached 600m in 1:28.63, with Hodgkinson on her shoulder and Jemma Reekie clawing the inside and shortest route.

Also as in Brussels, Goule eased back a little on the final bend and kicked in the final straight again but this time Hodgkinson was closer, had not run as wide and was able to ease past to win comfortably in 1:57.98, with Kate Grace catching Goule as both ran 1:58.34. 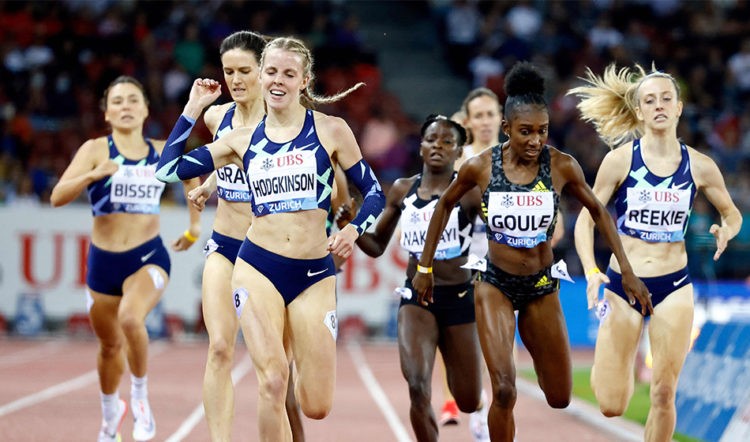 To the relief of Britain’s other 800m runners, Hodgkinson’s third-fastest time ever sealed her World Championships place for next year and leaves three qualifying spots remaining. She said: “My aim here today was to win and it was not going to be easy with a field which is very strong. I just wanted to make sure I gave it my all.

“It was my last race [of the season], so I think I did that, and to come home with a win, it’s the icing on the cake really. Now I am going home and I am going straight on a plane [to Greece], and I am not going home for 10 days. I don’t want to see a track for those 10 days and I am leaving my running shoes at home.”

“This season’s been crazy and I couldn’t be happier really. I feel like I had the strength in the last 150m [tonight] and it was a good race!” @keelyhodgkinson reflects on a spectacular 2021. #WDLFinal 🇨🇭 pic.twitter.com/wnvWUopDK6

There were no records in the women’s 1500m, though the final 300m of 42.92 was one of the fastest ever as the world champion Sifan Hassan again did battle with the Olympic champion Faith Kipyegon.

Chanelle Price did her usual good job of 63.32 at 400m and 2:08.94 at 800m but had to slow down as clearly no one was interested in the advertised 2:06 pace. The field slowed even more through 1200m, in 3:15.41, before Kipyegon picked things up considerably with Hassan looking strong on her shoulder.

As they came into the straight, it seemed like the Dutch athlete might get by but the Kenyan showed her usual determined finish and eased away in the final 10 metres to take first in 3:58.33 to the Olympic 5000m and 10,000m champion’s 3:58.55.

Kipyegon was second to Hassan in Doha in 2019 and lost to her rival in her opening 1500m in Florence this year but, just as in Monaco and Tokyo, she proved herself the best current or indeed greatest ever 1500m runner with her last 200m of 28.0.

“I knew it would be a tactical race today and we gave the leading girl a big gap,” said Kipyegon. “I was controlling the pace in front. I was confident that in the last lap I could do better and it worked. This is my second Diamond League Trophy and my first as a mother. I won almost all my competitions including the Olympic final.”

Hassan said: “Faith is really one of the greatest athletes and I wanted to give everything in my last race. This year I struggled with my training, I could not go to the US. Next year, I will train my speed and I will be amazing.”

Josette Norris, who ran the 5000m in the US Olympic Trials where she placed eighth, continued her great post-Olympic form by easily being the best of the rest with third place in 4:00.41. Katie Snowden was ninth in 4:06.48.

The women’s 100m hurdles provided another track highlight with three of the top four setting PBs.
Nigerian Tobi Amusan won in an African record 12.42 (0.4) and the Olympic fourth-placer beat fifth-placer Nadine Visser’s Dutch record 12.51. Megan Tapper was third in 12.55 ahead of Payton Chadwick’s PB 12.62, with Britain’s Cindy Sember a solid fifth in 12.71.

The women’s 400m started the track final programme and it featured an exciting four-way race for the title. It seemed that the reward of a guaranteed World Championships place gave American champion Quanera Hayes the added stimulus of winning and her 49.88 – close to her 49.78 season’s best – gave the Olympic seventh-placer a narrow win over Toyko silver medallist Marileidy Paulino’s 49.96. Sada Williams was third in 50.24, just edging Stephenie Ann McPherson’s 50.25.

The women’s steeplechase was also competitive, with six athletes together at the bell. The first kilometre was run in 3:00.23 though the pace dropped and Norah Jeruto was ahead at 2000m in a slow 6:08.10.

On the last lap Jeruto, who missed the Olympics, maintained her unbeaten record with a very strong last lap to win by around eight metres in 9:07.33.

Hyvin Kiyeng, the Olympic bronze medallist, looked in contention until the final water jump but landed flat-footed and effectively lost her eventual final margin to Jeruto as she went deep in the water. However, she did well over the final barrier to repel the challenge of Tokyo runner-up Courtney Frerichs – 9:08.55 to 9:08.74.

Olympic champion Peruth Chemutai was seventh in 9:20.16, equalling her Diamond League best of the year.

In the 400m hurdles, Femke Bol resumed her battle with Shamier Little and again it was the Dutchwoman who came out on top as she set a meeting record 52.80. Little looked menacing as she hit the straight level but Bol, keeping her form superbly, eased away to win by half a second from the American’s 53.35, with Anna Ryzhykova’s 53.70 beating compatriot Viktoriya Tkachuk’s 53.76 PB.

Bol said: “Before the race I made a plan with my coach to get a good time and win with the meeting record and I got both. On the last 100m I was full of lactic acid, I had to push so hard. I wanted to win so badly, I heard the crowd cheer. It gave me so much energy.

“It is great to run such a time this late in the season. It is amazing – I won all the Diamond League meetings and I won here. My season is really a dream! Everything I could dream about came true this season.”