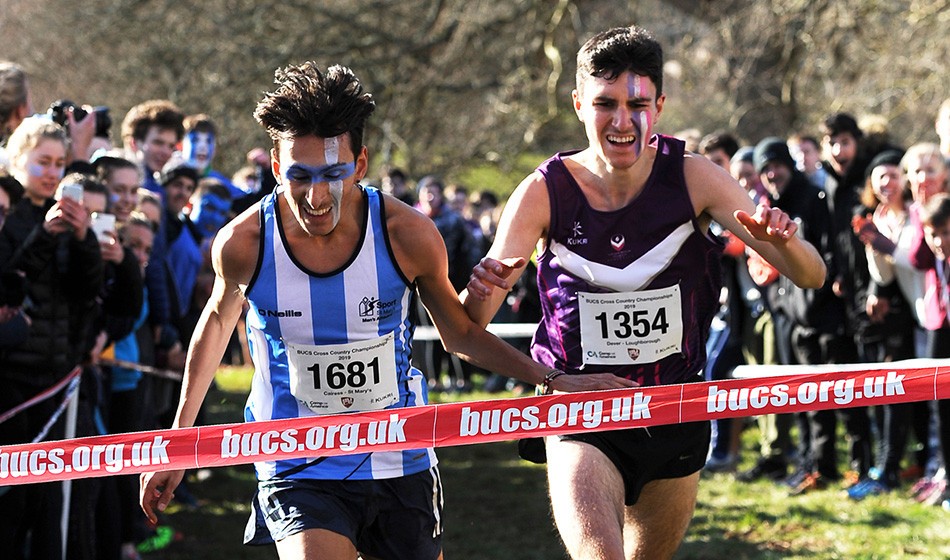 Emile Cairess’s battle with Patrick Dever at the British Universities and Colleges Sport (BUCS) Cross Country Championships was so close that neither athlete was totally sure who had won when they crossed the finish line at Bicton College on Saturday.

Amid frenzied cheers from fellow student athletes, Cairess (pictured, above left) was soon given the verdict over Dever (pictured, above right). On the official results, DB Max Sports Timing rounded the result up to a tenth of a second, but Cairess and Dever were actually separated by a mere thousandth of a second after 10km of rugged racing around the undulating, picturesque course, with the final decision made by the race adjudicator and a photo finish.

Cross-country titles are rarely decided by the thickness of a vest but the victory meant St Mary’s won all three individual races after Anna Emilie Møller took the women’s title for the Twickenham-based university from runner-up Amelia Quirk of Birmingham, while Abdulqani Sharif of St Mary’s won the men’s ‘B’ race over 8km.

Fears that the event might be cancelled following snow-related travel chaos in the West Country two days earlier did not materialise. Nearby Dartmoor and Bodmin Moor were still covered in thick snow on the day of the championships and a number of local events were cancelled, but Bicton College in south Devon offered a snow and ice-free grassy surface under crystal clear blue skies and chilly but far-from-freezing temperatures.

Runners were tested with several hills, too, including a double whammy of steep inclines near the finish. But a short ‘water feature’ that would have seen competitors run through the edge of the lake was scrapped by the race referee in the final hour before the first race, although students were given the chance to run through it if they wished (and plenty of the middle-of-the-pack finishers and back markers did).

Despite the challenging nature of the course, Cairess, Dever and Oliver Fox of Cambridge were inseparable as they approached the final climb to the finish. Fox was the first to break and he had to settle for third as Dever and Cairess slugged it out as dozens of fellow student athletes, many with faces daubed in university colours, lined the home straight to cheer them home.

“It was great to win the Northerns last weekend but it’s a better feeling to win here because it’s a national event with such a great atmosphere,” said Cairess, who clocked 31:13 along with Dever as Fox ran 31:19 for bronze.

“As a student it’s the race that everyone aims for,” added Cairess, who was third in the BUCS Cross last year.

Ironically, Cairess and Dever have a history of ultra-close finishes as well. At the BUCS 5000m in 2017, for example, they were separated by eight hundredths of a second in a battle for silver.

“We were very close (17 hundredths of a second) in a 5000m at BMC SportCity a few weeks after that, too, so we’ve had a few close encounters!” said Dever. “It’s a great rivalry.”

What a finish to the #BUCSXC men’s 10km as Emile Cairess of St Mary’s pips Patrick Dever of Loughborough with Oliver Fox of Cambridge 3rd. pic.twitter.com/6l4HCXKwe1

Møller lived up to her billing as favourite for the women’s title yet the Danish runner had to work hard for victory. Jess Judd pushed the pace in the early stages – eventually finishing fourth and leading Loughborough to team gold – whereas Quirk also took a turn at the front and finished only 11 seconds behind Møller as the European under-23 champion sealed the title.

Møller returned from a mid-winter training camp in Lanzarote on Thursday, but she adapted from the warmth of the Spanish island to the chilly temperatures of south Devon to win. As her impressive cross-country season continues, she now looks forward to the IAAF World Cross Country Championships on her home soil in Denmark next month as well.

“It was a tough course and a proper cross-country race,” said Møller. “We didn’t go through the water in the end but I was happy with that as it was cold and hard enough without the water.”

Jo Pavey, who lives in Devon, was among the spectators as a guest of honour and she said she was impressed with the quality of the racing, the superb course and the brilliant atmosphere created by the squads of student runners.