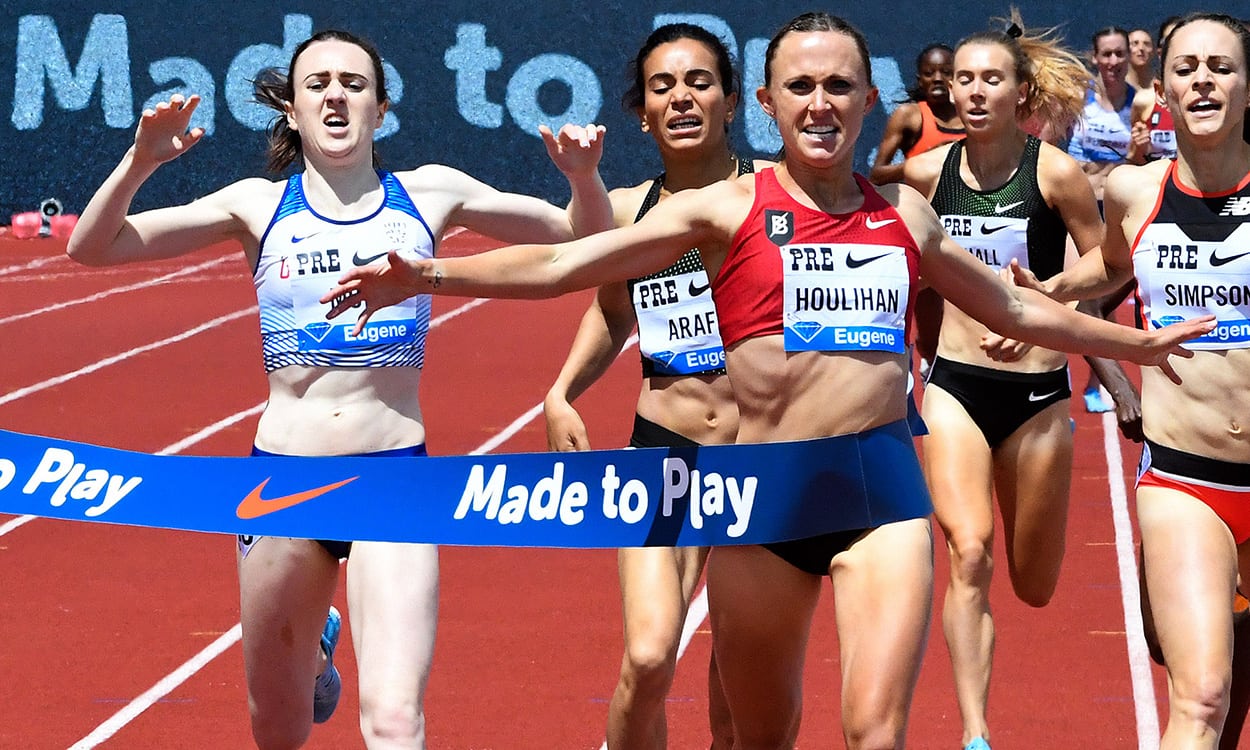 Shelby Houlihan again kicked to victory in Lausanne as the American powered down the home straight to win a competitive 1500m from Britain’s Laura Muir at the Athletissima Diamond League meeting.

In fourth place with 150m to go, Houlihan surged off the final bend to pass British record-holder Muir, who had made a move 250m out, plus Sifan Hassan and Gudaf Tsegay to secure success in a time of 3:57.34 to move to fourth on the US all-time list.

“I didn’t have many expectations coming into the race today and was actually a bit worried as I was not feeling very well,” said Houlihan, who also won at the Prefontaine Classic and US championships.

“I had to talk to myself during the race to stay in a comfortable position and the incredible crowd here brought me home during the last 200 meters.”

Speaking with Stuart Weir after the race, Muir said: “I was happy with it. I knew it was going to be a fast race, which the girls had asked for. I was happy to sit in on the first half, work hard and use my strength in the second half.

“I nearly got the win so I’m really pleased with that.”

There was another American victory a short while later as Noah Lyles stormed to take the 200m in 19.69, equalling his world lead and PB to beat his compatriot Michael Norman with 19.88.

A total of seven athletes cleared 4.72m in the women’s pole vault competition which was eventually won by Olympic and world champion Katerina Stefanidi of Greece on count back from Jenn Suhr and Anzhelika Sidorova as all three cleared 4.82m.

Just a single centimetre separated the top two in the men’s triple jump as Christian Taylor won with 17.62m ahead of Pedro Pablo Pichardo with 17.61m.

After his false start in Paris, Sergey Shubenkov ran a 110m hurdles world lead of 12.92 to go equal eighth on the world all-time list in Hungary and he followed that up with another dominant win in Lausanne, clocking 12.95 to finish ahead of Devon Allen in 13.29.

The 46.98 400m hurdles man Abderrahman Samba continued his winning ways as he ran 47.42 for victory ahead of world champion Karsten Warholm. Britain’s Jack Green was seventh in 49.52.

Shamier Little powered to victory in the women’s race in 53.41 from Janieve Russell with a 53.46 PB.

There was drama in the closing stages of the men’s 5000m as Yomif Kejelcha and Selemon Barega clashed on the final bend and Kejelcha started to fall, grabbing the shorts of Barega in front of him on his way. Birhanu Balew pulled away to win in a world-leading PB of 13:01.09 from Barega with 13:02.67.

Chaos on the final bend in the 5000m in Lausanne as Kejelcha and Barega get in a tangle. pic.twitter.com/JIqzB4Hu92

On her debut in a Diamond League meeting, USA’s Gabrielle Thomas took 200m victory in 22.47 as Britain’s Jodie Williams finished fourth in 22.85.

Athletissima action had begun the evening before with the men’s pole vault, which was won by world record-holder Renaud Lavillenie with a clearance of 5.91m.