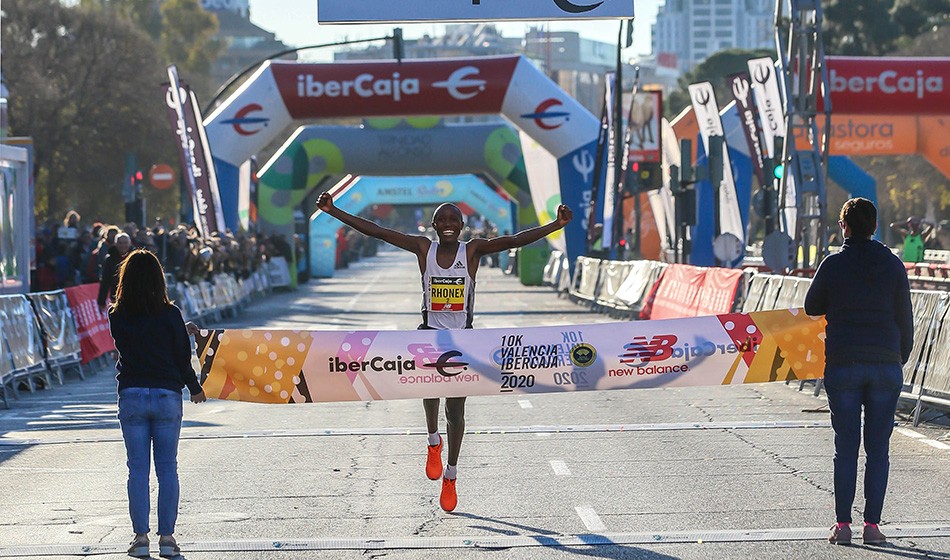 The men’s world 10km record fell and the women’s record came under threat on Sunday as Rhonex Kipruto and Sheila Chepkirui stormed to success at the 10K Valencia Ibercaja.

Kipruto, who is aged just 20, also broke the official world 5km record with his half-way split of 13:18, although faster times (such as Sammy Kipketer’s 13:00 from Carlsbad in 2000) were set before it became an official world record distance.

Kipruto’s second half was an even faster 13:06 but is not eligible for record ratification and his overall time takes 14 seconds off the world 10km record set by Joshua Cheptegei in the same city just six weeks ago.

Given the current discussion around Nike’s Vaporfly shoes, the world record performance was met with some comment on social media that Kipruto had achieved it while running in adidas shoes, rather than Nike.

His countryman Benard Kimeli was second in 27:12, while Switzerland’s Julien Wanders improved his own European record with a time of 27:13 for third, having also beaten the previous official European 5km mark with 13:29 on his way to that time.

Britain’s Callum Hawkins, who has been pre selected for the Tokyo 2020 marathon, started Olympic year in fine style as he ran a big PB of 28:02 in 11th, improving on his previous best of 28:55 set at this event last year and breaking the Scottish best of 28:13 set by Allister Hutton in 1984. He went through half way in a PB of 13:59.

His fellow Briton Ben Connor also ran a PB of 28:10 in 16th, with those times moving them to equal 10th and equal 18th on the UK all-time list respectively.

Chepkirui was one of three women to dip inside 30 minutes as she came close to the women’s world record of 29:43 set by Joyciline Jepkosgei in Prague in 2017.

Her fellow Kenyans Rosemary Wanjiru and Norah Jeruto ran 29:50 and 29:51 respectively for second and third place in the women’s race, which was held at the same time as the men’s race, with those times moving them to third and fourth on the world all-time list behind Jepkosgei and Chepkirui.