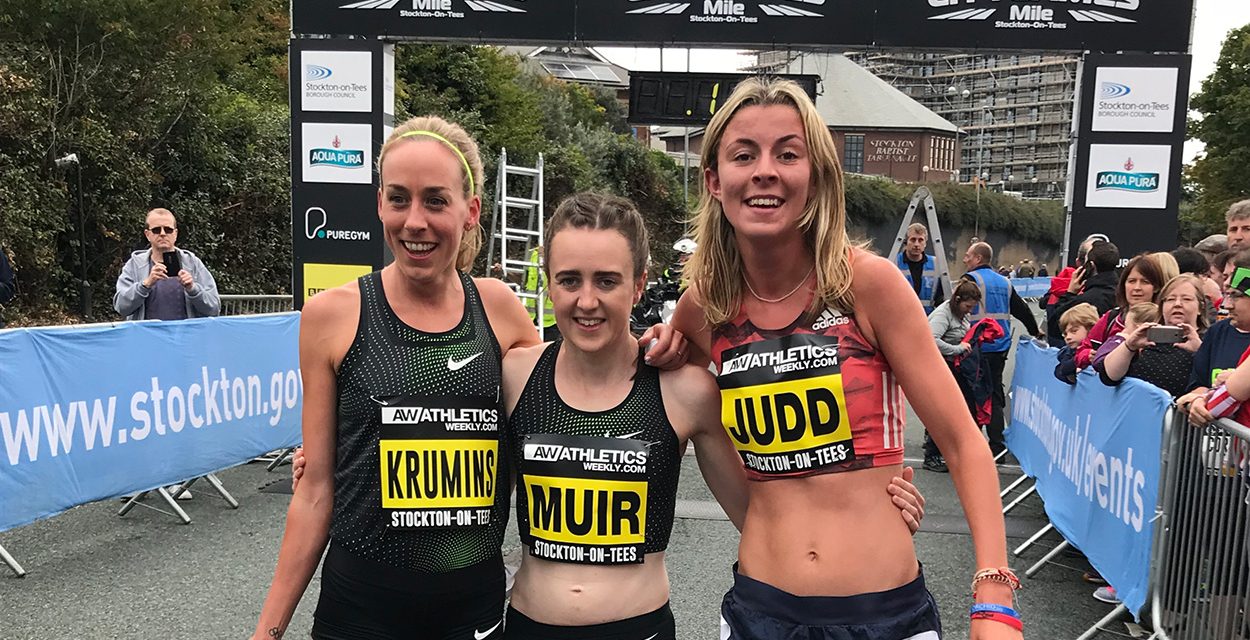 European 1500m champion ends season on a high with victory in Stockton-on-Tees, while Williamsz retains his title

Britain’s Laura Muir ended a superb season with another victory as she won the Great North CityGames mile, while Australia’s Jordan Williamsz also secured further success as he retained his title in Stockton-on-Tees.

A week after winning the Diamond League 1500m title in Brussels, which she added to her European win from Berlin, Muir used her strong kick to surge away and win in a time of 4:33 ahead of European 10,000m silver medallist Susan Krumins of Netherlands with the same time and Britain’s Jess Judd with 4:35.

Muir’s fellow Scot Jemma Reekie was fourth in 4:36 and now the pair head off on a well-deserved holiday to Canada, while Eilish McColgan was fifth in 4:38.

“I wouldn’t have been happy with any other result today!” said a delighted Muir.

“I put in quite a big kick quite far out and had to try and maintain that to the finish. Luckily I managed to get there in first place.

“I could hear somebody and I thought ‘I’ve got to keep pushing’. I just made sure I had a little bit left towards the end.

“I’m really pleased I could finish with a win on home soil.”

Forming part of the popular street athletics meeting, the mile races moved from the Newcastle and Gateshead Quayside to a new location in the County Durham market town, with the course starting off quite technical before a fast finish off the Infinity Bridge over the River Tees.

Williamsz successfully defended his title after out-kicking Abdelaati Iguider in 4:11 as Paul Robinson and Robbie Fitzgibbon were close behind.

Williamsz is from Australia but the Nic Bideau-coached athlete feels at home in the UK as he lives in Teddington for the European summer season and has enjoyed good success in in Britain – such as reaching the World Championships 1500m semi-finals in London last year.

Iguider is a good scalp for him to take as well as the Moroccan won Olympic 1500m bronze at London 2012 and is a former world indoor champion. So, after winning this race in 2017 and 2018, why is Williamsz so successful in road miles?

“I often find on the track I’m comfortable toward the back, staying out of things and relaxing as the leaders often go off too fast for me. But in a road mile you can be at the back but not more than two or three steps from the lead, so I guess it works for me tactically,” he explained.

Given his road mile ability, is he not frustrated that the CityGames clashes with the 5th Avenue Mile in New York? “I really wanted to do Fifth Ave last year,” he added, “but I came here to the CityGames and it’s awesome. They do it so well. I’ve been looking forward to this race for weeks and it hasn’t disappointed me.”

Clearly a Great Run weekend fan, he added: “On Sunday I’m actually going to do the half-marathon as well – although I’m just going to be jogging around.”

» Full coverage in the September 13 edition of AW magazine