Laura Muir given a stern semi-final test in Doha 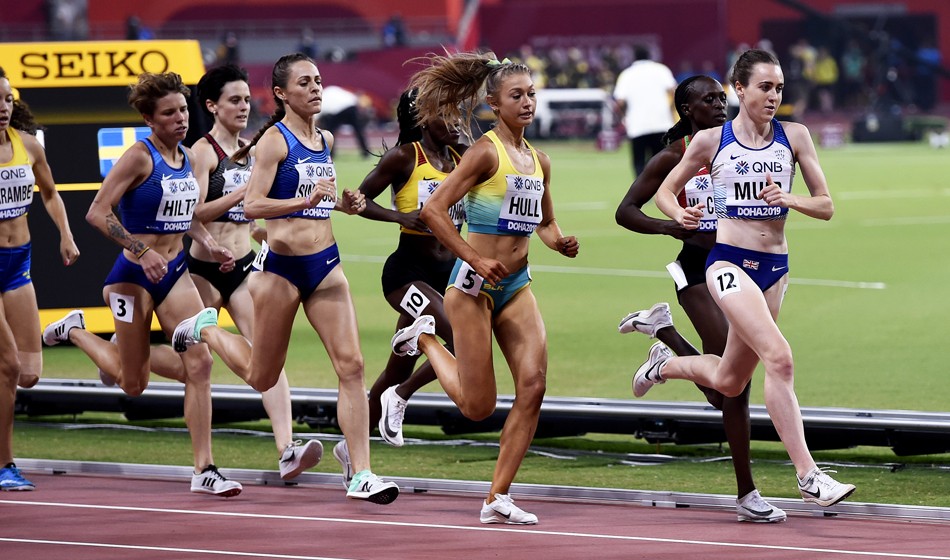 Laura Muir insisted she had taken plenty of confidence from the manner of her progress to Saturday’s 1500m final at the IAAF World Championships in Doha.

The European champion continued her comeback from injury with an extremely stern test for the calf which has been causing so much concern, her semi-final turning out to be the quickest ever in a world championships and coming down to a blanket finish after Ethiopian Guday Tsegay had made much of the running.

Ireland have an athlete in the world women’s 1500m final for the first time since Sonia O’Sullivan in 1997 after Ciara Mageean ran 4:15.94 to qualify in fifth, edging out Britain’s Sarah McDonald, while Australia’s Jessica Hull’s 4:01.80 made a piece of unwanted history in the second semi-final as the fastest non-qualifying time ever.

Tsegay had led the field through the opening lap in 63.79 and had begun to open a gap on the second-placed Ugandan Winnie Nanyondo before Muir, who had been loitering at the back in the early stages, covered the move and the field had bunched back up at the 800m with the clock showing 2:10.31.

Tsegay was still marginally ahead as the bell was reached in 2:59.23 and with Stafford moving up in the outside and Simpson coming through on the inside rail, there was very little to choose between the athletes as they crossed the line.

“Oh my goodness everyone talks about the final but you have to actually get there first,” said Muir. “These girls are fast, a 4:01 there for a semi-final, I’m really happy to run that time.It was a bit like deja vu with the same three girls at the front from the heat.

“I’m so happy to be back and am confident with my body. It is a good confidence boost, we’ve got a couple of days now. It’s gives me a lot of confidence knowing I can run that sort of time feeling comfortable.”

She added: “It went really well and I felt really good. I knew I was going to stay out of the way for the first half of the race, and make sure I was in position for the second. I did that and I conserved as much energy as I could. I just wanted to get an automatic qualifying spot and I’m really happy.

“I’ve got 48 hours now before the final – that’s loads of time for me to recover. In terms of recovery in terms of the final I’m really positive.”

“Most people who know me, know I’m not a natural leader in the race,” she said. “I promised to get on the rail, and I did that well, but no-one came in front of me, so I found myself in a position where I was leading.

“I’d spoken to my coach and I knew that I was going to make a move at some point and I kind of knew that had to be sooner rather than later in that kind of race. I just didn’t have the legs in the last 50m.”

The men’s 1500m heats proved to be the most competitive and highest quality in world championships history, with the British trio of Jake Wightman, Josh Kerr and Neil Gourley all qualifying with fast finishes but also having to work all the way to progress.

A record number of 26 runners broke 3:38 with Spain’s Adel Mechaal gaining the unwelcome distinction of becoming the fastest ever non-qualifier with his 3:37.95.

In the first heat, just 0.15 of a second covered the leading seven, with world indoor champion Samuel Tefera missing out on a top six and automatic place in 3:37.82, though he did narrowly progress as a fastest loser.

“It was a bit rough, I was pushed around which was my fault for getting into some tight spots but as far as the race went I did enough to get through which is all that mattered today,” said Wightman.

The second heat was faster and more spread out but only after a number of fallers disrupted the rhythm.

Favourite Timothy Cheruiyot (3:36.82) won from Kerr (3:36.99), Bob Blankenship (3:37.13) and Filip Ingebrigtsen (3:37.26), who twice had to negotiate fallen runners including Tedesse Lemi after he accidentally tripped him on the last lap when the Ethiopian moved across him.

“They’re pretty intense, especially when you’ve got three heats with fantastic runners in there and everyone’s saying ‘it’s top 6’, but you’ve got to make sure you’re running with your head up and understand the people around you are also pretty quick,” said Kerr.  “You’ve got to run to your own race plan and I was able to do that.”

The latter ran a smart race and was always in a qualifying position.

“At this level sometimes you get tactical races and sometimes someone just wants to take it on,” said Gourley. “My race was one of those and I just had to be patient because there were a lot of little moves happening and you have just got to pick the right time.

“Fortunately I was able to find a little gap to do that. You have to plan for everything.”

Neil Gourley is glad to get going at last in Doha in the 1500m heats – and looks good qualifying. #WorldAthleticsChamps pic.twitter.com/LdGhRS5fvh