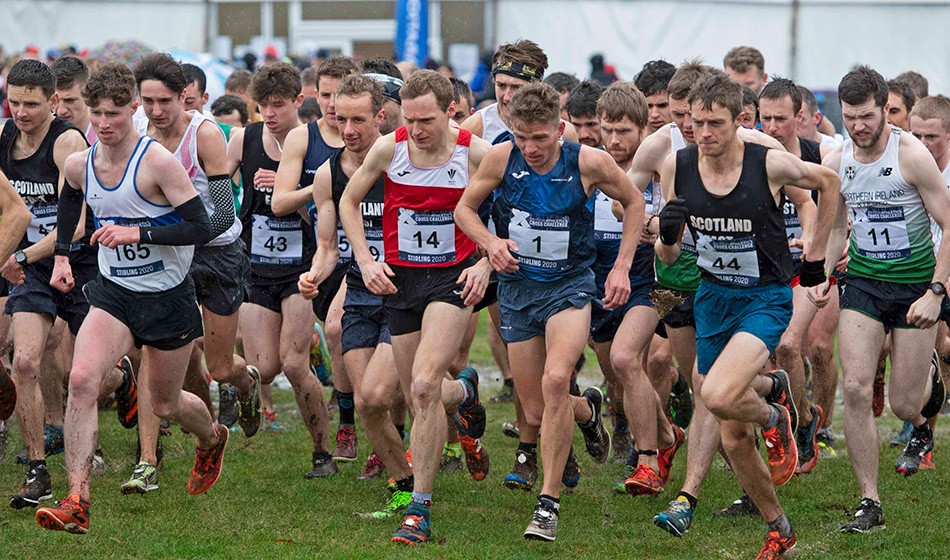 Rain, wind and mud puts athletes to the test in Scotland as cross country scores are settled

The wind blew, the rain fell and the mud deepened, but fine racing was also in plentiful supply despite the extremely challenging conditions at the Run Stirling Cross Country International.

Home Countries International, Celtic International and Scottish Inter-District titles, as well as British Athletics Cross Challenge points, were up for grabs during a breathless day of competition in the heart of Scotland which really did fit the description of sport ‘in the raw’. With the 7.3km multi-terrain Great Stirling Castle Run also being staged alongside the cross country events, it meant that almost 3000 hardy souls took on the elements at the King’s Park venue.

Welshman Kris Jones made light of the heavy going, however, and was the final winner of the day as he took the men’s senior race with a second-half charge that saw him break the tape over the 8km course in 25:33, 10 seconds ahead of Scotland’s Jamie Crowe, while local favourite and one-time race leader Andrew Butchart couldn’t recover from a mid-race fall and was pipped for a podium place right on the line by England’s Adam Hickey. Lachlan Oates’ ninth-place finish, however, meant that Scotland took the senior men’s Home Countries team title for the first time in eight years.

The conditions were perfect for Jones, part of Great Britain’s gold-medal winning team at the European Cross Country Championships in Lisbon alongside Butchart and Hickey, who put his international mountain running and orienteering skills to fine use.

“I’m really happy to come away with a win there. It’s amazing,” he grinned.

“I think I’m quite a versatile runner and, with the orienteering, I’ve run on tougher stuff than this but it’s about just keeping smooth and not using too much energy so I tried to do that as well as I could.”

Jones, who lives in Scotland, added: “Andy put a dig in with two laps to go and he got a quite a big gap quite quickly – maybe 10 metres – and I thought ‘that’s it, he’s gone’ but over the course of the lap he started to come back to me and I thought that whenever you catch somebody you’ve got to go and push past them. I did that and I’m just really happy that was the win.”

In the senior women’s race, Kate Avery continued her fine cross country season as she led the England team to the Home Countries title, covering 8km in 29:20 to come home 11 seconds ahead of team-mate Abbie Donnelly, with Wales’ Bronwen Owen third in 29:39. 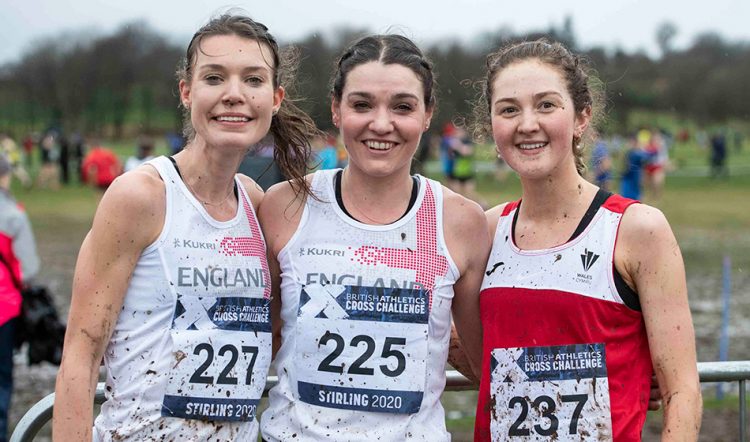 Avery, another team gold medal winner from Lisbon, now also moves to the top of the Cross Challenge standings.

“My plan was to sit in and then pick it up as I went but I just felt so uncomfortable behind because you couldn’t see where your feet were going and the ground looked fine but actually your foot was half deep in mud so I just went to the front and controlled the race,” said Avery.

There was an historic start to the day as Scotland’s under-20 women won Home Countries International team gold for the first time ever.

Megan Keith, in her last year of high school, will spend the coming week sitting prelim exams but was fully focused on finishing top of the under-20 class here as she clocked 26:14 for the 7km course, while her Scotland team-mate Cera Gemmell was second in 26:25, with England’s Olivia Mason third in 26:32. Eloise Walker completed the gold winning home trio in fourth place with a time of 27:23.

In the men’s under-20 contest, England athletes occupied three of the top four to take team honours, with Thomas Keen finishing first in a time of 23:38, coming home just in front of team-mate Matthew Stonier (23:41) and North of England’s Josh Dickinson (23:43). Tomer Tarrango completed the England line-up in fourth thanks to his 23:47.

There were dominant performances in both of the under-17 races, with Scotland’s Anna Hedley clocking 22:40 for 6km to finish 39 seconds ahead of Ireland’s Emma Landers, with Scotland East’s Pippa Carcas third in 23:11. Mansfield Harrier Jenson Connell enjoyed a winning margin of 20 seconds as he took the men’s contest in 19:39 ahead of Middlesbrough AC’s Archie Lowe, while Scotland West’s Jack Patton was third in 20:10.

The under-15 contests took place in some of the very worst conditions of the day, but that didn’t prevent Highworth RC’s Kiya Dee from impressing over the 4km distance as she won in 14.55, with Saffron Athletics Club’s Elsie Robinson 20 seconds back in second and Inverness Harrier Anna Cairns in 15:22. Birtley AC’s Christopher Perkins won the boys race by nine seconds as he clocked 13:42 to beat Central AC’s Connor Bell (13:51) and Vale Royal’s Jake Wilson (13:54).

Freya Murdoch and Alden Collier were the under-13 girls and boys winners respectively.

See the January 16 edition of AW magazine for full coverage.