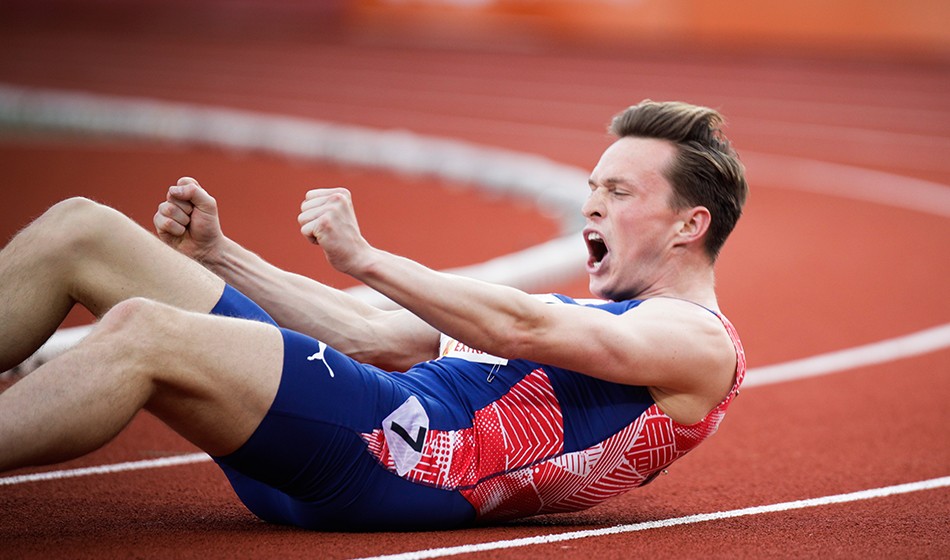 World champion runs 33.78 and Jakob Ingebrigtsen breaks European 2000m record with 4:50.01 in front of a cardboard cutout crowd and TV viewers around the world

Karsten Warholm stormed to the quickest outdoor 300m hurdles time in history on Thursday, clocking 33.78 as the Diamond League returned in an exhibition event format in Oslo.

The behind-closed-doors ‘Impossible Games’, held within Norway’s infection control requirements due to the coronavirus pandemic, replaced the traditional Oslo Bislett Games meeting and saw athletes compete in front of a cardboard cutout crowd as well as TV viewers around the world.

The action was not just in Norway, as a team 2000m featured a European best by Jakob Ingebrigtsen as he and his team-mates in Oslo raced against athletes including Timothy Cheruiyot and Elijah Manangoi in a wet Nairobi. Meanwhile, in a battle between the current and former world pole vault record-holders, Mondo Duplantis secured success in the Bislett Stadium ahead of Renaud Lavillenie, who was competing in his own back garden in France.

It was just Warholm against the clock in the men’s 300m hurdles as he took to the track alone, targeting the 34.48 which had been set by Britain’s Chris Rawlinson in 2002.

Starting next to a cardboard cutout of himself in the stands, Norway’s two-time world 400m hurdles champion blasted out of the blocks and didn’t let up, going on to take 0.70 off the previous best.

“I am used to competing against myself in training,” he said. “It’s better to do it alone than to not do it at all.”

He later contributed his winnings to Amnesty International Norway and The Church City Mission.

“I know that my running doesn’t make the world a better place. But hopefully my actions can!” he wrote on Instagram.

A close women’s race was won by Denmark’s Olympic silver medallist Sara Slott Petersen in 39.42 ahead of Amalie Iuel in 39.44. Lea Sprunger, trying a new stride pattern, was third in 39.86.

The event had British middle-distance great Steve Cram back on BBC commentary and it was his long-standing European 2000m record which was broken by Ingebrigtsen.

His brothers Henrik and Filip ran 4:53.72 and 4:56.91 respectively in second and third, with Filip also having broken the Norwegian 1000m record with 2:16.46 in another race less than an hour earlier.

Jakob Ingebrigtsen was a double winner in Oslo last night. Not only did he smash the European 2000m record, claiming victory in 4:50.01, he also won the bouquet throw! Photos by Eirik Førde/Bislett Alliance.#ImpossibleGames report ➡️ https://t.co/ip0fEwUjQb 💐 pic.twitter.com/BiIR9uiCas

‘Team Ingebrigtsen’ won ahead of ‘Team Cheruiyot’, who had to contend with challenging weather conditions and altitude in Nairobi.

There was a second European best broken in Oslo as Sondre Nordstad Moen clocked 1:12:46.5 to move to No.2 on the world all-time list in the rarely-run 25,000m.

After being crowned joint champions of the inaugural ‘Ultimate Garden Clash’, Duplantis and Lavillenie were back in action but in another remote pole vault contest.

Sweden’s Duplantis was among the athletes competing in Oslo, while Lavillenie had already recorded his vaults at home in France and they were being revealed in real time as the competition played out.

Duplantis was the first to clear 5.71m as he managed it first time, while Lavillenie, competing off a shortened approach, needed all three attempts.

They both soared over 5.81m on their first tries and Duplantis had the competition won with his clearance of 5.86m before three unsuccessful attempts at 6.01m.

“I wanted to jump a little bit higher but I knew I wasn’t in the best shape of my life right now,” said world silver medallist Duplantis. “I know I’m rusty!”

"I wanted to jump a little bit higher but I knew I wasn't in the best shape of my life right now. I know I'm rusty!"@mondohoss600 on winning the pole vault at 5.86m.#ImpossibleGames

Another Norwegian record fell as Line Kloster won the 200m hurdles in 26.11 but there was no such joy in the 3000m for Karoline Bjerkeli Grøvdal, who had been set to target Grete Waitz’s 8:31.75, as she withdrew mid run after struggling with injury in the lead-up.

The women’s 600m saw Selina Büchel storm out of the blocks but she was unable to maintain the pace and Hedda Hynne came through to win in 1:29.06 over Büchel’s 1:30.10.