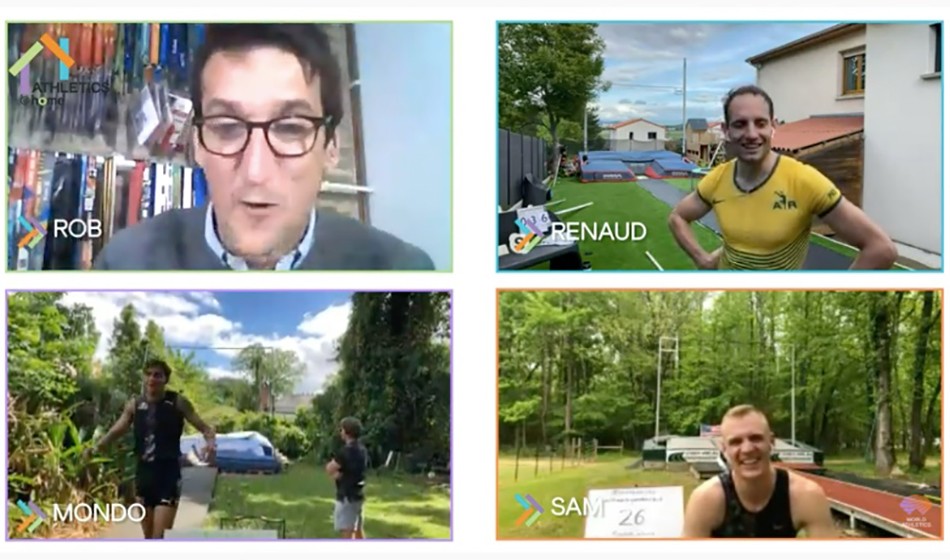 Current and former world record-holder both clear 5.00m a total of 36 times in 30 minutes in unique remote lockdown competition

With traditional athletics action suspended due to the coronavirus pandemic, the trio each vaulted from the comfort and safety of their own back gardens and competed via a live video link in front of thousands of fans, with Rob Walker on commentary.

Rather than the traditional competition format which sees athletes battle to clear the best height, this time the challenge was to clear a 5.00m bar as many times as possible within 30 minutes in a real test of technique and endurance.

Sweden’s Duplantis was competing at his base in Lafayette, Louisiana, while USA’s Kendricks was in his back garden in Oxford, Mississippi, and France’s Lavillenie was jumping in his garden in Clermont-Ferrand.

Duplantis was ahead after the first 15 minutes as the 20-year-old, who cleared his world record of 6.18m in Glasgow in February, soared over the 5.00m bar 18 times.

Despite knocking the bar on his 10th vault, 33-year-old Lavillenie managed 17 clearances in the first half, while Kendricks achieved 13.

It was Duplantis’ turn to knock off the bar during the second half, however, and Lavillenie caught up. France’s 2012 Olympic champion got 19 clearances to Duplantis’ 18, while Kendricks gained another 13 to add to his tally.

A three-minute ‘jump off’ to decide the winner was then discussed but after Lavillenie declared “I’m done!” the athletes decided to share the spoils.

“I was really missing the feeling I get competing,” said Lavillenie, who came up with the idea for the competition.

“It’s crazy but even doing this in my garden, I get the same feeling I’d get at a major championships.

“It was very exciting and I’m very happy to be a part of it. I’m not going to do it every week, but I’m happy to do it once a year.”

Duplantis said: “It was really fun being out there competing against those guys.

“I had really missed competing. I didn’t think it was going to end in a tie, but that’s sports!”

World Athletics is exploring the possibility of holding other ‘Ultimate Garden Clash’ competitions in the coming weeks.

Watch a repeat of the stream on the World Athletics YouTube channel or check out the video below for highlights.