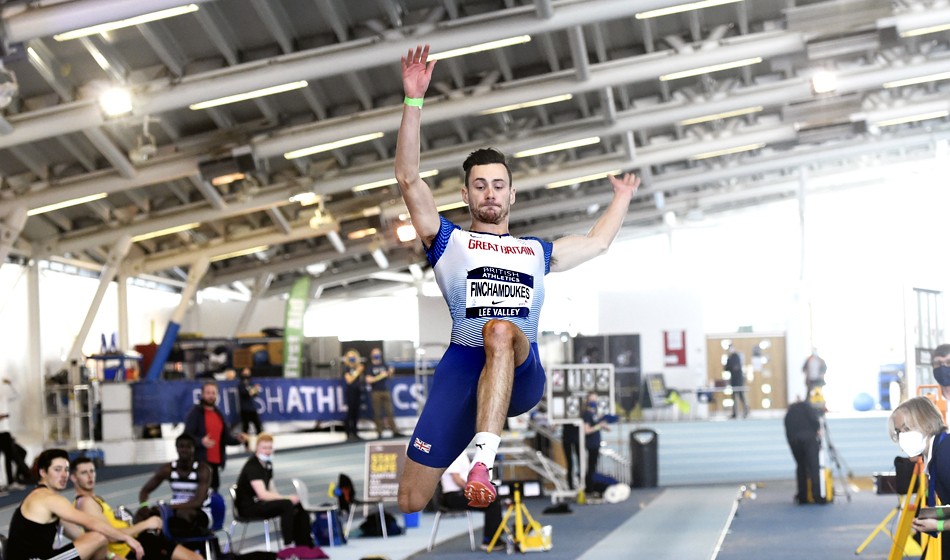 Long jumper moves to fourth on the UK indoor all-time list with 8.08m leap as athletes seek standards for Toruń

Jacob Fincham-Dukes was among the athletes to secure qualifying standards for the European Indoor Championships in Toruń during the first day of trials action on Saturday (February 20).

With the British Indoor Championships in Glasgow cancelled because of the pandemic, athletes are instead competing at a series of three micro-meetings and it was at the Lee Valley event that long jumper Fincham-Dukes soared out to 8.08m, while Andrew Robertson secured another 60m standard.

Over in Manchester, Verity Ockenden and Jack Rowe were among those to run European Indoors 3000m standards, while Jessie Knight, Jodie Williams and Lee Thompson achieved 400m marks.

At Lee Valley, Fincham-Dukes’ winning jump was an outright PB which improves on the 24-year-old’s previous best of 8.00m set outdoors in 2019. The mark moves him to fourth on the UK indoor all-time list behind only Greg Rutherford (8.26m), Chris Tomlinson (8.18m) and Dan Bramble (8.14m) and also surpasses the 8.05m qualifying standard for next month’s European event.

The performance came after a less than ideal build up, too, as the US-based athlete tested positive for coronavirus around a month before the competition and feared he may not be able to make the journey.

But the trip did go ahead and was well worthwhile as he first jumped 7.86m before a foul and his 8.08m in the third round which he followed with a fourth-round foul, 7.61m from his fifth attempt and 7.82m from his sixth. The week before he had also jumped 7.81m at Loughborough.

“Today went better than I could have expected,” said the European U23s finalist. “I am just really happy I got over the qualifier and set a PB. It means a lot.

“I’ve been working really hard over this last year and a half. I did 7.99m indoors a couple of years ago and outdoors last year I was having a bunch of injury problems, so it’s always difficult going into the winter carrying that with you, but I worked really hard and took really good care of my body. I made sure everything I was doing was at a better standard and it’s paying off and there’s more to come.”

The women’s competition was won by European and Commonwealth medallist Jazmin Sawyers who leapt 6.45m, with Abigail Irozuru jumping 6.34m for second.

The men’s 60m saw 2020 British champion Robertson equal his season’s best with another European Indoors standard of 6.61 to win the final ahead of Oliver Bromby and Harry Aikines-Aryeetey, who both clocked 6.67. Robertson had run 6.67 in his heat.

British champion David King is another US-based athlete and despite only arriving in the UK a few hours before the competition he won both his 60m hurdles races, clocking 7.79 and then 7.73. Ethan Akanni equalled his PB with 7.78. The standard for Toruń is 7.65.

“I’ve just flown in from Phoenix so it must be about 4am or 5am right now, for me,” said King. “There’s been such limited competition opportunity even in America, I just wanted to have the chance to come here and try and run the time.

Results from Lee Valley can be found here.

The rest of Saturday’s UK Euro trials action took place in Manchester, with Ockenden and Rowe among those achieving European Indoors standards.

Knight and Williams both ran qualifying times to win their heats, clocking 52.46 and an indoor PB of 52.76 respectively.

Andrew Murphy was the sole entrant in the men’s heptathlon but after a 7.24 60m and 6.85m long jump he had three fouls in the shot put.

He returned for the high jump, however, and cleared 1.80m.

Results from Manchester can be found here.

The action continues in Manchester and Loughborough on Sunday.