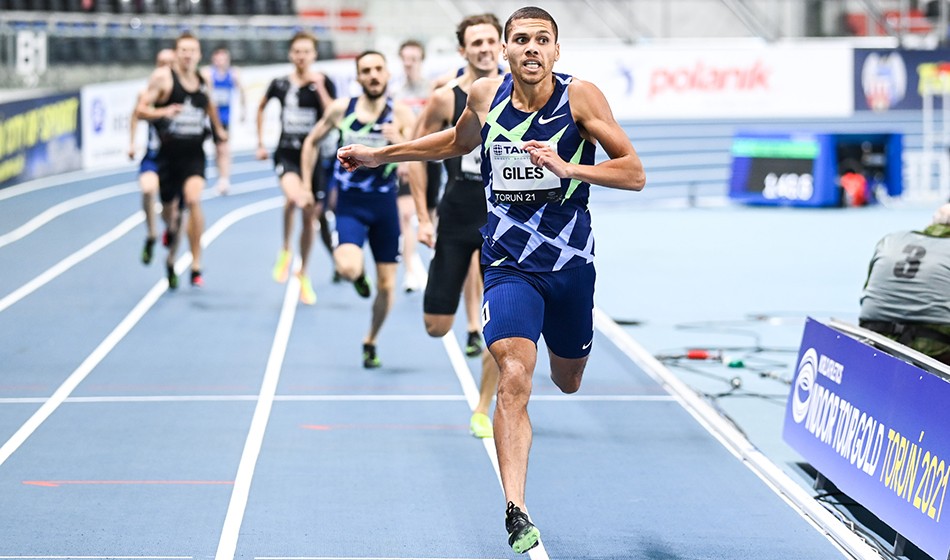 With 1:43.63 Giles moves to second on the world indoor all-time list on an action-packed evening in Poland

Even if you hadn’t seen the clock, the look on Elliot Giles’ face told you something very special had just happened in Toruń.

Storming over the finish line in a time of 1:43.63 at the Copernicus Cup on Wednesday (February 17), the world indoor fourth-placer smashed Seb Coe’s British indoor 800m record and launched himself to second on the world indoor all-time list behind only Wilson Kipketer.

The signs had been there. Wins over 800m in Karlsruhe and Liévin were followed by another PB over 1500m in Val-de-Reuil, but it was clear even Giles himself didn’t expect to go quite so quick.

“I’m still trying to process what even just happened,” said the 26-year-old. “It really does feel like a blur.

“I can’t believe I just ran 1:43 indoors. I can’t put into words right now how it feels. I’m so overwhelmed by it all. Oh man. It feels like I’m on cloud nine.”

He had his compatriot Jamie Webb on his shoulder at the bell, which he reached in 1:17.28, but Giles held his place and moved away over the final lap to eventually win by almost a second before raising his arms in celebration as his time was confirmed.

“I thought I would run quick, I know I am in great shape,” added Giles, who won European bronze in 2016, two years after he was forced to take time away from the sport following a serious motorcycle accident. “I’m rolling with it so well that I just knew that if it was clicking, I could win the race. I didn’t try and run a time, I just ran.

“I just didn’t feel like I tied up at all, I didn’t feel like I hit lactic. I crossed that line and I kind of get it now – when I see people run those really quick times and think ‘how are they still running afterwards?’ But I could have continued around there. I think sometimes if you’re a bit of a freak, your body can do those things, and I have seen it in training many times but I’ve never actually been able to produce it in a race. It’s just beautiful to have been able to do that.”

✅ British indoor record
✅ No.2 on the world indoor all-time list

British middle-distance running in is remarkable health right now and when asked how much the domestic competition has pushed him, he replied: “That’s exactly why I’m probably running the way I am. I’m not necessarily running scared but I’m running aware of everyone.

“It’s dog-eat-dog at the moment. We’re all after each other and those guys are all running well. So I want to be just as good or better than them.

“I’ve got to keep pushing now. It’s easy to let my emotion run wild now and think that this is going to be it but nothing really changes. I still have to work as hard as I did. If I’m going to go to European Indoors it’s not going to be easy, I’m going to have to feel some horrible pain to win that race but I’m willing to do that and I’m enjoying it. While I’m enjoying it I think I’m going to continue running well.”

The latest World Athletics Indoor Tour Gold event offered another packed programme and a record was also broken in the women’s 800m as Ethiopia’s Habitam Alemu ran a big PB to improve the previous meeting best with 1:58.19. Poland’s Joanna Jóźwik was second with 2:00.42, while Nadia Power had another fine run to smash her Irish indoor record with 2:00.98 in third.

The USA’s Javianne Oliver continued her winning streak this season as she stormed to 60m success, equalling Dina Asher-Smith’s world lead of 7.08 for a clear win. Switzerland’s Ajla Del Ponte was second with 7.15 and Poland’s Ewa Swoboda third, 0.01 of a second back. 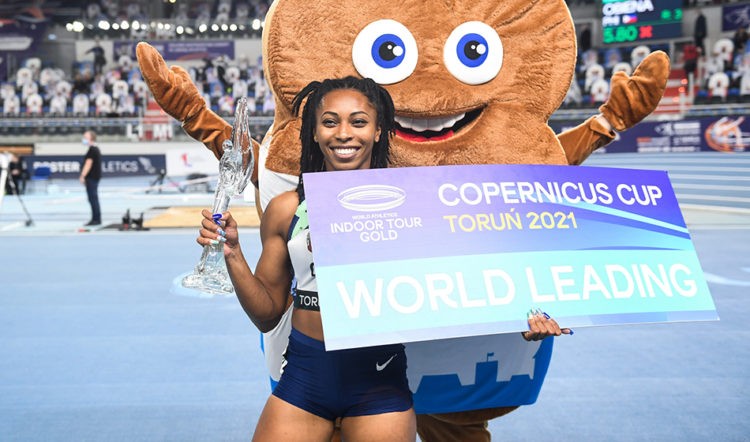 Grant Holloway insists the world 60m hurdles record is not his main aim but he again came close to Colin Jackson’s 7.30. After 7.32 in Liévin and a series of other fine runs, this time he clocked 7.38 for a meeting record ahead of Wilhem Belocian with 7.57, despite the race having been restarted a number of times.

There was a world lead by the USA’s Christina Clemons in the women’s 60m hurdles as she clocked 7.81.

Femke Bol was another to continue her impressive form as she won the second of the evening’s 400m races in 50.66 for an outright Dutch record.

The women’s 3000m saw Beatrice Chepkoech back in action just a few days after her world 5km record on the roads in Monaco and while the race in Toruń also got off to a fast start, Kenya’s world steeplechase champion had to settle for second place on this occasion as Ethiopia’s Lemlem Hailu kicked to victory.

Hailu, Chepkoech and Ethiopia’s Fantu Worku had followed the pacemaker through 1000m on world record pace, clocking 2:44.60, but 200m earlier the world record-holder, Genzebe Dibaba, had dropped out of the race on her season debut.

Ethiopia’s world 5000m silver medallist Selemon Barega won the 1500m in an indoor PB and meeting record of 3:32.97 from Marcin Lewandowski with a Polish indoor record of 3:35.71. In third, Neil Gourley ran 3:35.79 to move to fifth on the UK indoor all-time rankings, whereas the time also beat his outdoor PB.

The men’s pole vault was won by the USA’s two-time world champion Sam Kendricks on countback thanks to his first-time clearance at 5.80m, while Poland’s Michał Haratyk won the shot put with 21.47m from Tomáš Staněk with 21.20m.