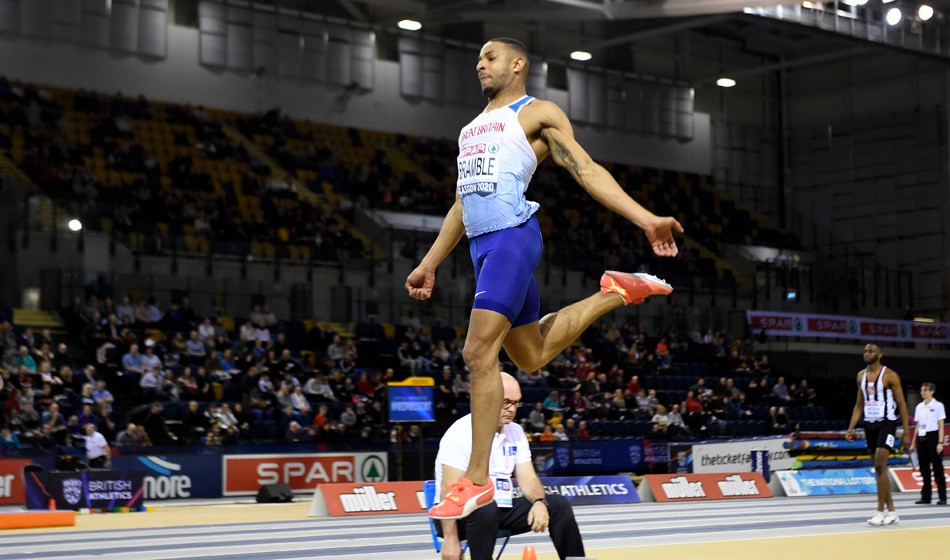 Dan Bramble saved his best until last as he leapt his way to a fourth long jump gold at the SPAR British Indoor Championships in Glasgow.

Trailing to Alex Farquharson’s personal best leap of 7.77m in the second round, the Shaftesbury athlete had found himself with a seven-centimetre gap to bridge going into his final jump.

Despite feeling out of sorts, Bramble had been in such a position before and called on his experience to produce the goods right when it mattered as he reached 7.81m and took the wind out of his opponent’s sails.

Coventry man Farquharson fouled on his final-round reply and had to settle for silver, while Sale’s Reynold Banigo took bronze for the second year running with a best jump of 7.75m.

“I don’t know what was going on – there was a miscommunication between my upper body and my lower body,” admitted Bramble, the first champion to be crowned this weekend, of his early jumps. “I pulled it around in the last round so I’m happy but today was a tricky one. It was hard mentally as well, when I know I should be jumping further, but we got there in the end.”

He added: “I’ve been in that position before where I’ve got to the last round and needed to pull out something big and I used that today – I kind of went back into that mode and used the nerves in my favour. It worked out.”

Scott Lincoln is another highly experienced field event athlete with a string of British indoor titles to his name and the shot putter made it five in a row in the final event of the opening day.

His opening throw of 19.49m was ultimately enough for the York man to get the job done. Woodford Green athlete Youcef Zatat got closest to the runaway leader with his PB of 18.61m, while a season’s best throw of 16.49m won bronze for Cornwall athlete Patrick Swan.

“It’s always good to take the title,” said Lincoln. “I’m just frustrated because I’m not in 19.50m shape, I’m a lot better than that. I’ve got more in the tank, but it will come when I get all systems firing.” 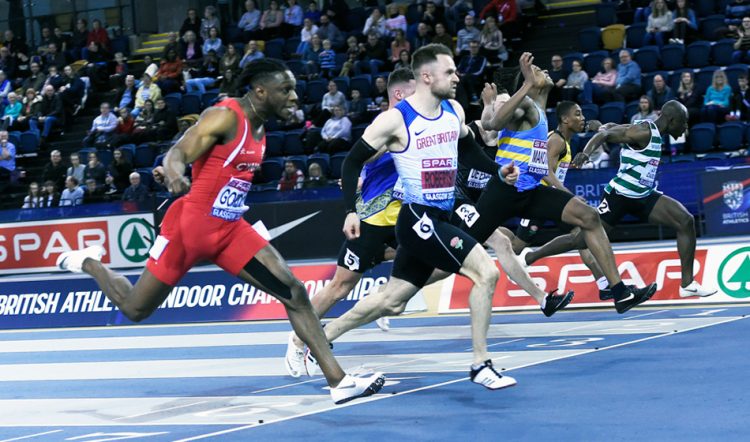 On the track, Andy Robertson was a happy man after winning his first 60m British title since 2017.

Adam Thomas, silver medallist last year, was fourth in 6.76 while defending champion Dominic Ashwell did not start the final due to injury.

Robertson was quickest to qualify from the semi-finals, a stage from which the 41-year-old world and European medallist Dwain Chambers did not progress.

Many of the bigger names may been absent but Robertson said: “I knew it wasn’t going to be a given, despite not having a great deal of big names here, but this is preparation for my summer and you don’t want to not do them.

“This year it’s a good marker heading into outdoors with that to my name. No one closed the gap when I got going and I won the gold, you can’t ask for more than that.”

David King admitted he is yet to get up to speed but that didn’t stop him from successfully defending his British indoor 60m hurdles title.

A change of training set-up which has involved a move out to Phoenix in Arizona is still all sinking in for the Plymouth athlete, but still he was able to steer a path to the top of the podium, clocking 7.78 to hold off Woodford Green’s Cameron Fillery, last year’s runner-up, and Bexley’s Ethan Akanni (7.92).

“It felt like there was a lot of pressure this year,” said King. “The guys are running really fast and it certainly wasn’t an easy run for me but I’m really, really pleased to do it and it’s great to retain my title.

“I’ve just moved to Phoenix Track Club and it’s been amazing but they really structure their year differently to how I’ve done things in the past. We haven’t done a lot of speed work or power work and I’ve really noticed that when I’ve gone to races this year.

“I’m running really, really nicely just now but I don’t quite have that spark yet.”

Jonny Davies timed his run to perfection as he took the first British title of his career thanks to a well-judged performance in the men’s 3000m.

After Preston’s Jamaine Coleman had made much of the running following a very slow start to a race which saw the pace gradually pick up, it was the Reading athlete who kicked his way into the lead at the bell and crossed the line first in 8:07.96. Leeds’ Phil Sesemann followed in 8:08.86, while Cardiff’s Michael Ward (8:10.31) agonisingly pipped Coleman to the final podium place (8:10.33) on the line.

“I had a plan to take it on towards the end, it was a weird race as it kind of crept up in pace rather than any surge,” said Davies. “I felt like I should probably have a British title but I haven’t so it’s nice to check it off.

“This year is a big year for everyone, at least I’ve had a win indoors and now to finish it off with having a British title and a win, tick, now I need to keep going.”

One of the most notable performances of the day came in the second heat of the men’s 800m heats, with Andrew Osagie progressing thanks to his run of 1:46.84, the fastest time at this event in 30 years. He was followed home by world 1500m finalist Josh Kerr, who was second-fastest to qualify with a time of 1:47.73. Piers Copeland, Guy Learmonth, Alex Botterill and Daniel Howells were the other athletes to get through to what looks like being an excellent final.

Full results can be found here, with the action continuing on Sunday from 12:00.