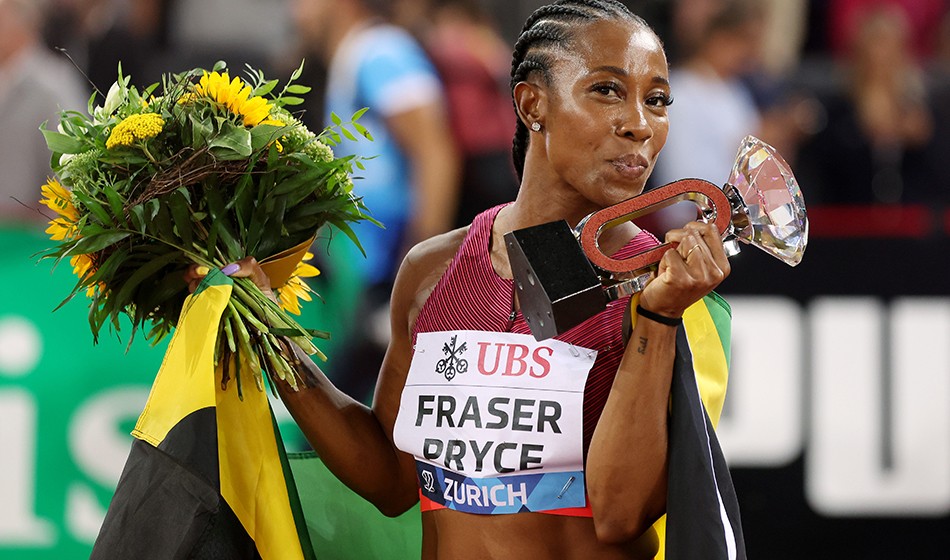 Shericka Jackson may have beaten world champion Shelly-Ann Fraser-Pryce over 100m in Brussels but normal service was resumed on Thursday night in Zurich as Fraser-Pryce sped to a meeting record equalling 10.65 (-0.8) – almost two metres up on Jackson (10.81).

It has been an astonishing year for the athlete who won her first Olympic title 14 years ago and she has easily produced the best series of marks by a woman sprinter in a calendar year.

This was her fourth best ever time but her fastest into a headwind and technically superior to her 10.60 PB with a generous 1.7 tailwind in Lausanne last year.

Even Florence Griffith-Joyner only broke 10.70 – with a legal wind – three times in her world record year of 1988 and the previous best was four such marks by five-time Olympic champion and the fastest woman alive Elaine Thompson-Herah last year. 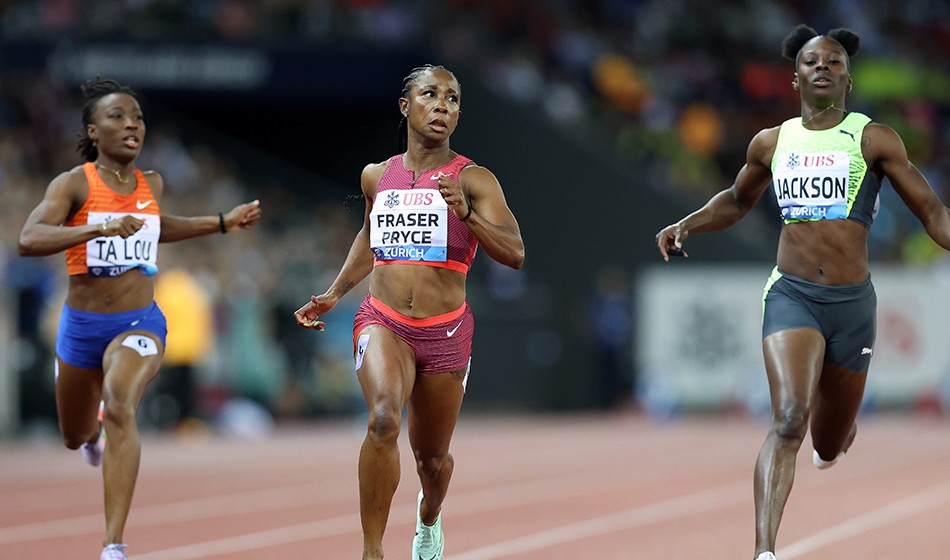 Marie-Josee Ta Lou was a clear third in 10.91 with European and Commonwealth medallist Daryll Neita continuing her consistent season with a fourth place 11.02 just ahead of World finalist Aleia Hobbs.

Sha’Carri Richardson was seventh and in 11.13 while Natasha Morrison was disqualified for a false start.

World 200m champion Jackson though had a chance in the final women’s event to make up for her loss and she won easily in 21.80 (-0.9) over five metres clear of Olympic bronze medallist Gabrielle Thomas (22.38) and fellow Americans Tamara Clark (22.42) and Jenna Prandini (22.45). 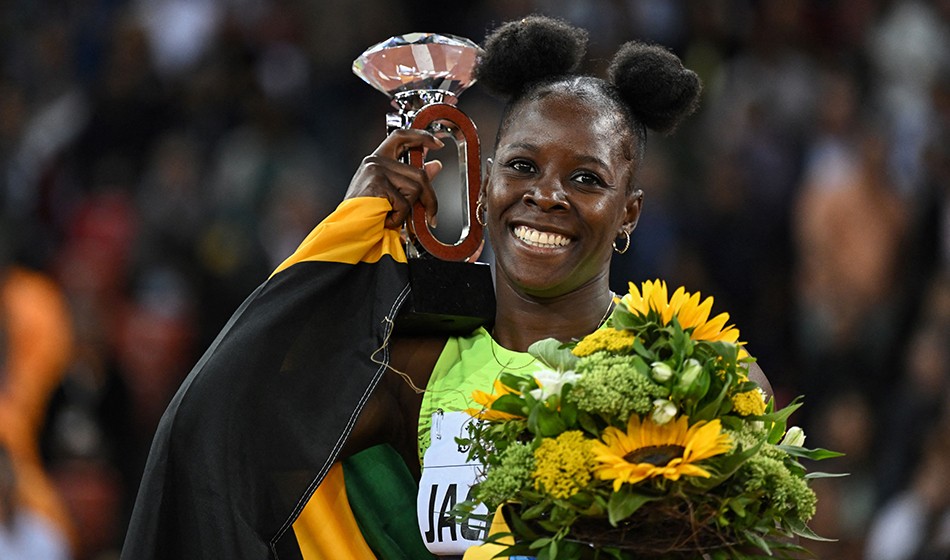 Although Olympic and world 400m champion Shaunae Miller-Uibo’s wasn’t in Zurich, Marileidy Paulino showed the Bahamian athlete would have had quite a contest as she won the opening track final comfortably in a Dominican record and world lead of 48.99.

Miller Uibo’s previous lead was 49.11 in Eugene. Her compatriot Fiordaliza Cofil was second in 49.93 with Sada Williams also inside 50 seconds with 49.98.

In the 100m hurdles, despite Tobi Amusan’s world record and world and Commonwealth victories, many thought a back in top form Olympic champion Jasmine Camacho-Quinn might challenge. However, the Nigerian dominated to win in a meeting record 12.29 (-0.3) and defend her Diamond League title with Tia Jones (12.40) second and world silver medallist Britany Anderson third in 12.42 with Camacho-Quinn fourth in 12.49.

Another world champion who dominated was Faith Kipyegon in the 1500m as the Kenyan claimed her third Diamond League crown. 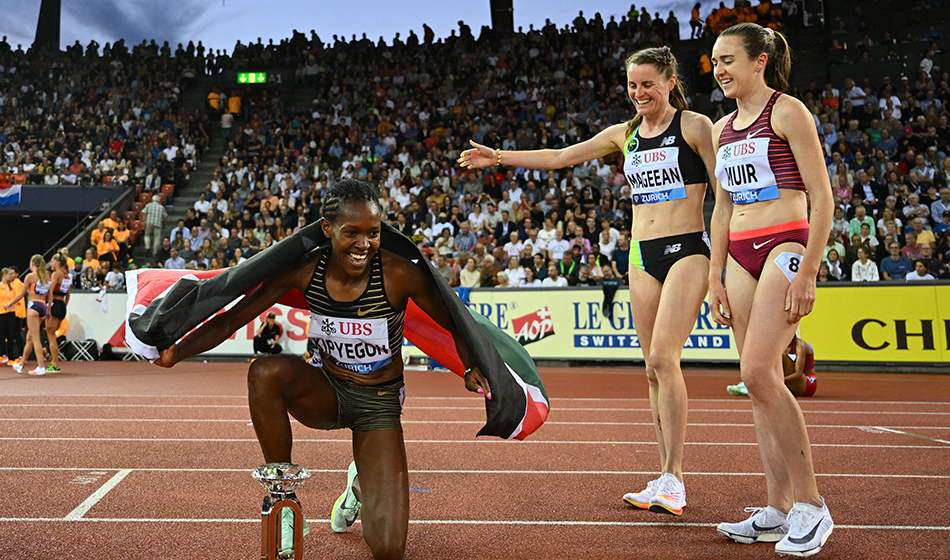 Ciara Mageean continued her stunning form – following her Commonwealth and European silver and Irish national 1500m record – with a fighting last lap of 58.7 to claim second place, fighting off the challenge of Ethiopia’s Freweyni Hailu (4:01.73) and Diribe Welteji (4:01.79).

It’s not often that Olympic and world silver medallist and European champion Keely Hodgkinson, who was last year’s Diamond league winner, suffers an off-day but she was never amongst the leading pace in the 800m, and although the Brit was still in contention at 600m in, her last 200m was a laboured 30.6 compared to winner Mary Moraa’s 29.4 – the Briton finishing fifth in 1:59.06.

The pacemaker went through in a ridiculous 55.8 with Moraa leading the rest in 57.6 and the Kenyan, who beat Hodgkinson in Birmingham but followed her home to a bronze medal in the worlds, controlled the race to the finish with a narrow advantage.

Natoya Goule, just out of the medals in Birmingham, was a close second in 1:57.85 with Safe Hurta, only seventh in the US Championships, showing her recent improvement with third place in 1:58.47.

With no world record-holder Sydney McLaughlin present, world silver medallist and European champion Femke Bol was a class apart in the 400m hurdles and she defended her Diamond League trophy with a strong finish in 53.03. 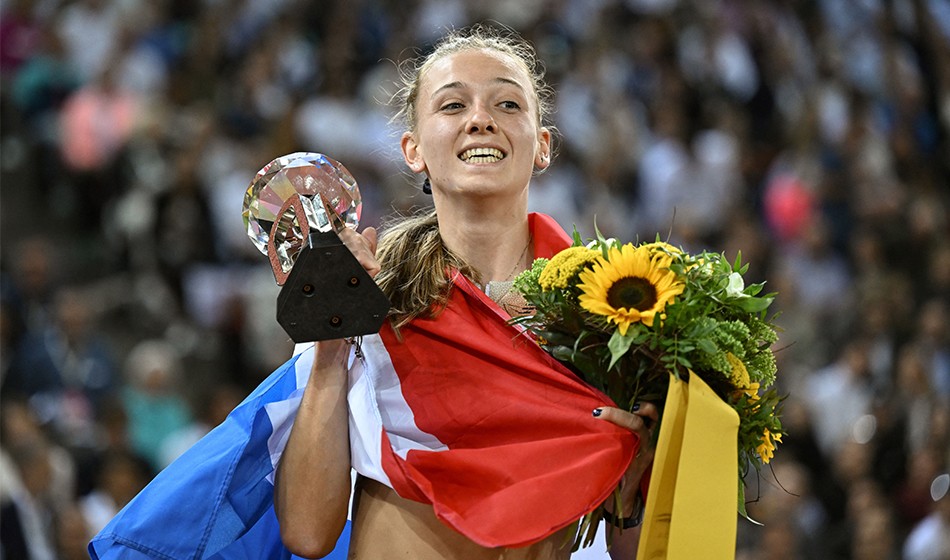 Gianna Woodruff finished seventh in both the Olympic and world  400m hurdles final so was a surprise second in 53.72, just ahead of Commonwealth champion Janieve Russell (53.77) and former Olympic and world champion and world record-holder Dalilah Muhammad (53.83), who had led through 200m (24.6) and 300m (38.1).

In the women’s triple jump, Yulimar Rojas dominated once again and won easily with a best jump of 15.28m (-0.2), giving the multi-global champion and world record-holder a clear victory. She also finished the competition with the second best jump – 14.99 (0.9).

European triple jump champion Maryna Bekh-Romanchuk was close to her personal best in second with a 14.96m (0.3) leap while world silver medallist and Commonwealth champion Shanieka Ricketts also jumped near to her best with a 14.85 (1.0) leap.

Tori Franklin was fourth with 14.75m in a superb high quality competition.

European high jump champion Yaroslava Mahuchikh followed up her 2.05m in Brussels with another top class performance.
The only athlete to clear 1.97m (at the second attempt), she then moved up to 2.03m and cleared that at the third attempt. She also had three attempts at 2.06m, just a week after the Ukrainian’s attempt at breaking world record. 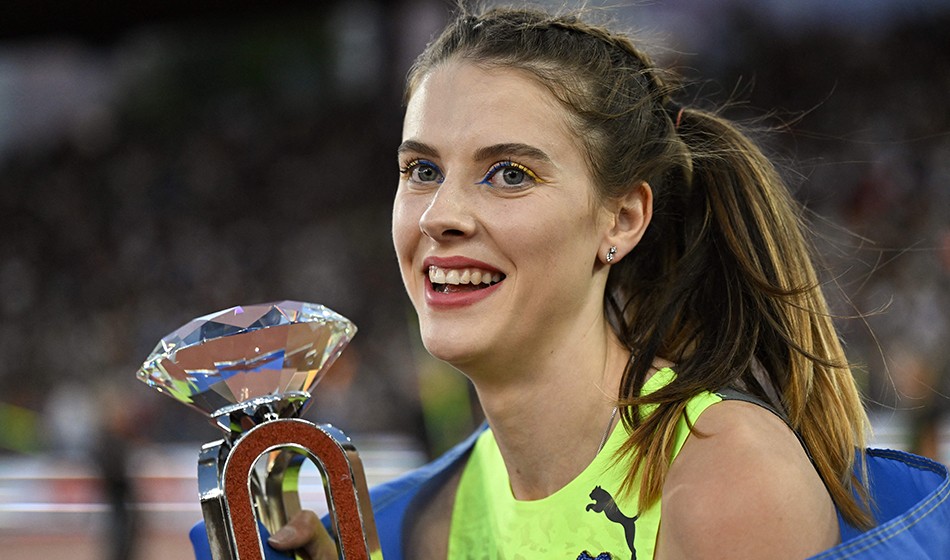 It was a Ukraine 1-2 as Iryna Gerashchenko took second place on count-back from Olympic silver medallist Nicola Olyslagers with a 1.94m leap.

It was Vuleta’s fourth Diamond League trophy. Lorraine Ugen was seventh with 6.38m (0.1).

Fresh from a world lead and US javelin record of 68.11m in Brussels, Kara Winger was too good again and record a best throw of 64.98m, giving her a clear victory over world champion Kelsey-Lee Barber’s 63.72m. World bronze medallist Haruka Kitaguchi was again third in 63.56m. 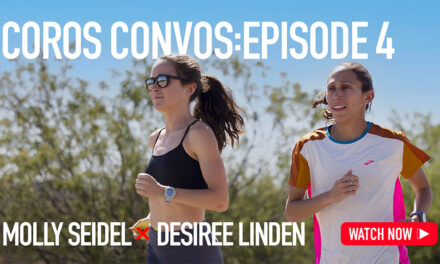 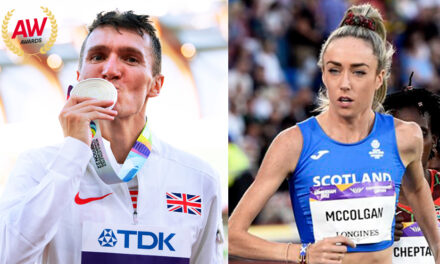 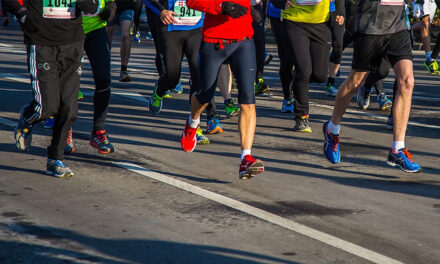 The do's and don'ts of post-marathon recovery 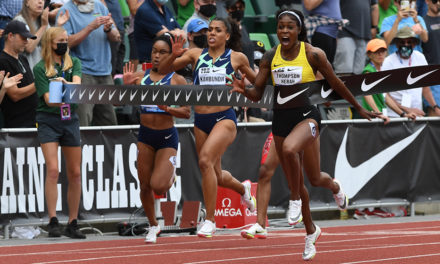 Diamond League finale to take place in US for first time 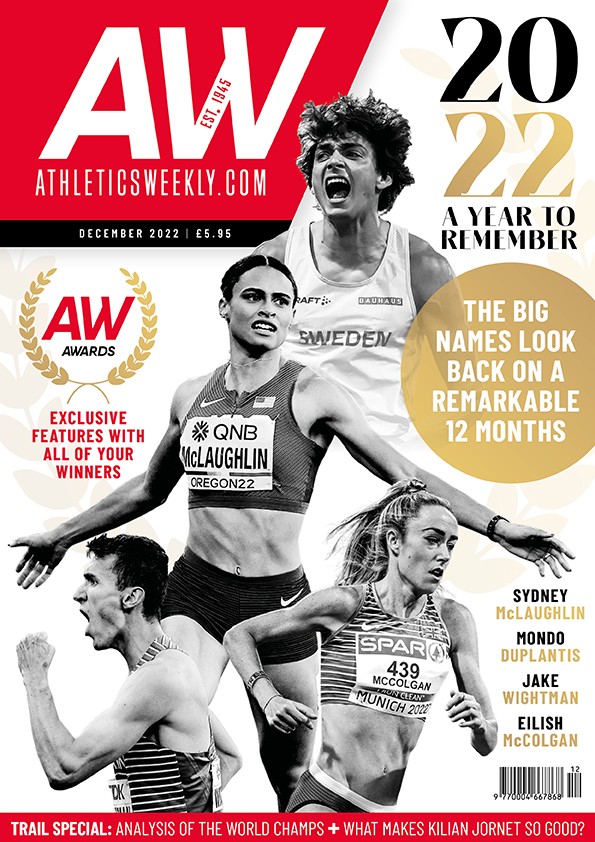 Such an honour to win this award alongside with incredible athletes. Thank you everyone for voting for me❤️ https://twitter.com/athleticsweekly/status/1600894916221341697

Female para-athlete of the year is @BreenOlivia 🇬🇧

Male masters athlete of the year is Paul Forbes 🇬🇧

Won world and European titles, as well as breaking records from 800m to the mile in the M65 age group 👏