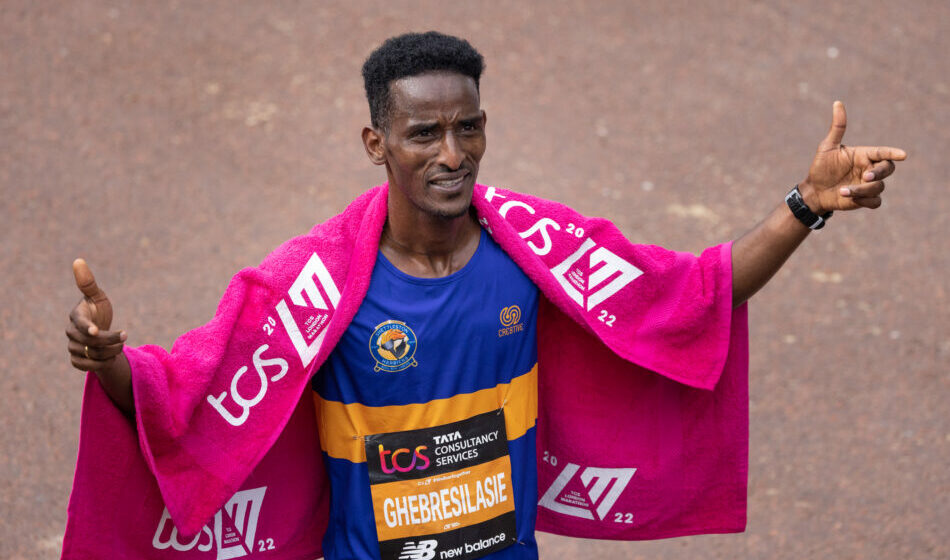 At the 2012 Olympics, the then teenage Weynay Ghebresilasie carried the national flag for Eritrea at the opening ceremony ahead of competing in the 3000m steeplechase.

A little over 10 years on, and back in London, the 28-year-old admitted he is aiming to make an Olympic return – only this time representing his adopted homeland of Great Britain – after finishing as first Briton at the London Marathon.

Clocking a personal best time of 2:11:57 to finish ninth overall in a race won by Kenya’s Amos Kipruto meant he was the first home athlete across the line in what was his third London Marathon appearance.

Though hamstring issues meant he slowed in the latter stages to finish outside of the 2:09:40 standard needed for next year’s World Championships in Budapest, Ghebresilasie – who qualified to compete for Britain last year – is fully focused on winning a different international vest at a global championships.

“That’s my plan – to run at the World Championships and the Paris Olympics,” he said. “So I will prepare for my next London Marathon.”

Weynay Ghebresilasie finished as the highest British male at the @LondonMarathon with 2:11:57 🇬🇧

Without a major kit sponsor, the man who first ran London in 2019 and clocked 2:17:21 to finish fastest from the mass start that year, was wearing the vest of Glasgow-based club Shettleston Harriers on Sunday (October 2).

Having been forced into joining the army, he sought asylum in the UK following those London Games and had spells living in Croydon, Huddersfield, Sunderland and Birmingham before, in 2015, making the move to Scotland.

Shettleston had welcomed a number of Eritrean asylum seekers into their fold in 2008 – including Tsegai Tewelde, who went on to run for Britain in the marathon at the Rio Olympics. Much of that work was spearheaded by John Mackay, Ghebresilasie’s now long-time mentor. “John is not just my coach, he is my Dad,” he says. “He has helped me with everything.”

In terms of his family back in Eritrea, Ghebresilasie has had no contact with them for three years and has never returned home. His parents, brother and sister live close to the Ethiopian border, where civil war continues to rage. “It is not a good situation in my country. Hopefully they are safe,” he says.

It helps to concentrate on his running. After running 2:16:27 for 12th in London last year and going faster still with 2:12:17 for 10th in Rotterdam in March before this performance, his trajectory is clearly on the right path.
“It’s amazing to represent Great Britain,” he says. “I’m very happy.”