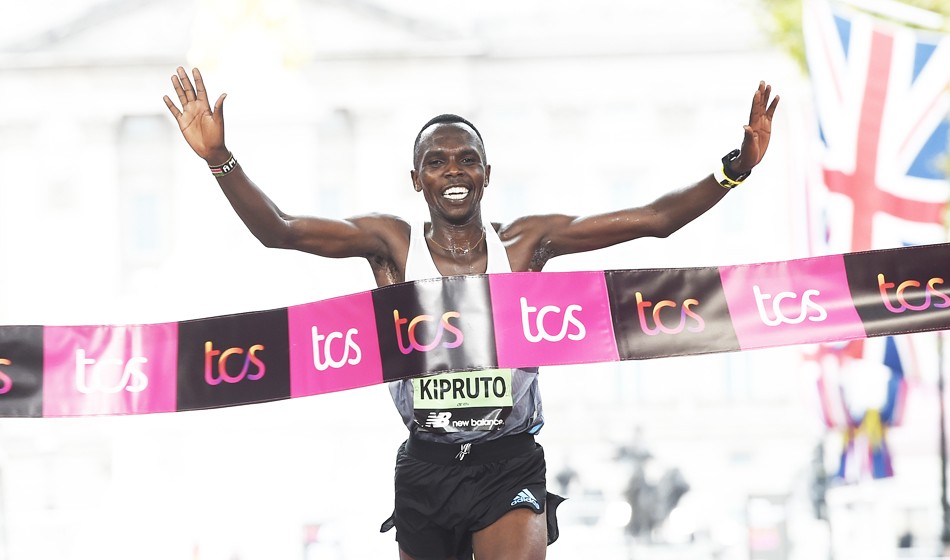 One week on from Eliud Kipchoge’s breathtaking world record demolition in Berlin, there was another major marathon victory for Kenya to celebrate on the streets of London as Amos Kipruto secured the biggest win of his career.

Though not quite as dominant as his superstar compatriot, to whom he finished second at the Tokyo Marathon earlier this year, the 2019 World Championships bronze medallist flew away from the leading pack in the closing miles as he clocked a winning time of 2:04:39.

It fell a little short of the PB of 2:03:13 which made him the second-fastest marathon runner in the world this year, but he cared little after seeing off some fearsome opposition, coming home well ahead of Ethiopia’s Leul Gebresilasie (2:05:12) and Belgian Bashir Abdi (2:05:19).

This year’s London showpiece had been beset by the withdrawal of a number of big names, including the likes of four-time Olympic gold medallist Mo Farah, but the pre-race attention had centred around the great Kenenisa Bekele and if the 40-year-old – the second-fastest in history over 26.2 miles – might be able to produce another moment of magic in his storied career.

The early signs were encouraging for the Ethiopian, who looked to be dictating terms as part of a seven-strong leading pack which also included Kipruto, Gebresilasie, Abdi, Kinde Atanaw, Birhanu Legese and last year’s winner Sisay Lemma.

Bekele led the group through 10km in 29:26 and it was those seven who remained locked together as a tactical battle began to unfold. That pattern remained through halfway, reached in 62:14, and it wasn’t until the 21st mile when things began to change as the 40-year-old started to drop back.

This was a cagey affair, though, and although Lemma also drifted off the pace two miles later, still no-one was prepared to truly take the race by the scruff of the neck. As they came through Blackfriars tunnel, however, Kipruto decided to make his move.

As the pack emerged from the darkness into the sunshine, he had put clear daylight between himself and the rest, covering the 24th mile in a rapid 4:36. Sensing his chance, the London debutant well and truly put his foot to the floor and took just 4:21 to complete the 25th mile. With the opposition unable to respond, the 30-year-old was able to enjoy a procession down the Mall to victory, still running strongly.

Asked if he could have gone even faster, Kipruto said: “Yes, I was ready for it. I have been trying to get on the podium but this is the day. This is a learning process. I know the way I am and everything went well.”

There was to be no winning moment for Bekele, though his finishing time of 2:05:53 in fifth place was an M40 age group world record. 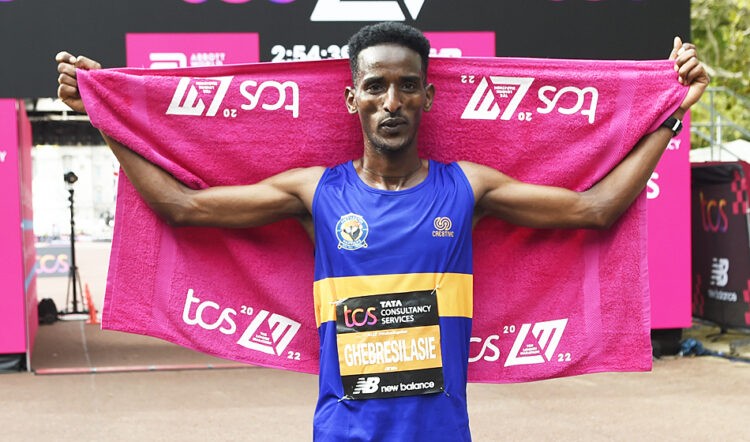 There had been a number of Britons right at the head of the race, with the likes of Andy Butchart, Emile Cairess and Marc Scott on pacemaking duties, but in the heat of the competition it was Weynay Ghebresilasie who held on to come ninth.

The 28-year-old, who was born in Eritrea but has lived in the UK since 2012 and is now based in Scotland, was outside his target of the World Championships qualifying mark of 2:09:40, but lowered his personal best to clock 2:11:57 for ninth place.

Phil Sesemann, first Briton last year, was not far behind in 2:12:10, also the fastest time of his marathon career so far. Ross Braden completed the home podium, coming 12th in 2:14:32.

Weynay Ghebresilasie finished as the highest British male at the @LondonMarathon with 2:11:57 🇬🇧