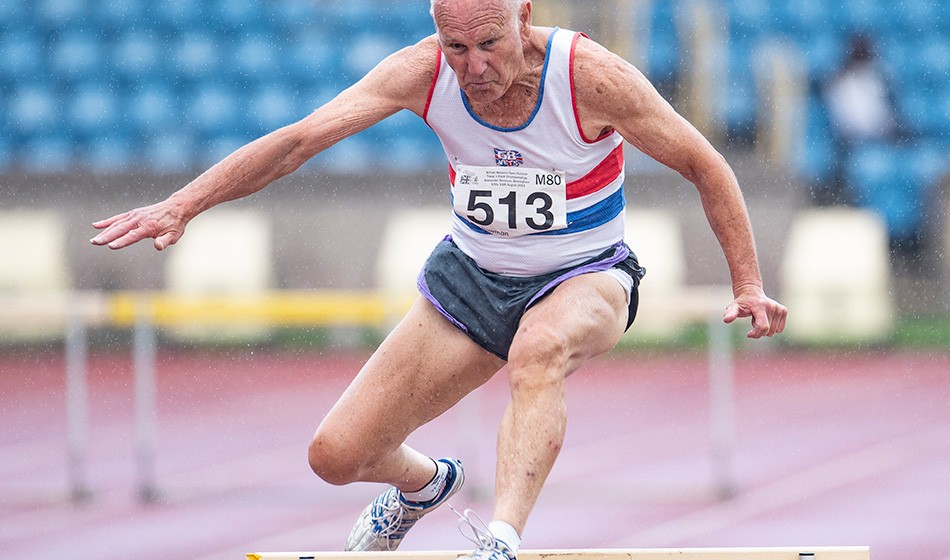 Overcoming adversity is a regular theme in athletics. Yet Tony Bowman has endured far more than his fair share of problems in the last year or so.

The 85-year-old has undergone surgery to correct irregularities in his heart and then, earlier this year, his wife died after falling ill with coronavirus.

In an attempt to maintain his own impressive levels of fitness when training facilities were closed due to the pandemic, he bought his own set of hurdles and began practising on an all-weather hockey pitch, only to find there are barely any competitions he can actually do.

Despite this he talks with optimism about 2021 and is looking forward to attacking world masters records in his age group.

Of course the Leeds-based athlete is not merely a ‘tough nut’. He has considerable talent too.

After being inspired by athletics after watching the 1948 London Olympics as a teenager with his dad, in 1952 he won a silver medal in the sprint hurdles at the English Schools Championships in Bradford and then, after a break of many years, he returned to the sport as a veteran to more or less carry on where he left off.

“I gave up sprinting when I was about 26 and then concentrated on playing hockey and tennis,” he says. “But then someone told me about veteran athletics and I was 42 at the time.”

Back in 1981 he ran the first London Marathon but did not believe he was suited to running long distances so he reverted to speed work. It was a smart move, because in addition to his masters titles he won the historic New Year Sprint handicap race in Musselburgh in Scotland in 2007, netting himself £4000 in the process.

In recent years this remarkable man has won world and European masters titles in sprints, hurdles and combined events and has broken world records recently in the over-80s age group.

Bowman fizzes with energy when he talks. “I’m very competitive and don’t seem to have lost that as I’ve got older,” he enthuses. “If anything I’ve got more competitive.”

For years he has paid for his own travel to international masters championships, winning multiple gold medals for Britain, using his own savings and pension. “I don’t get any funding or sponsorship whatsoever,” he says. “The only sponsorship that I’ve ever had is with David Lloyd where they gave me free membership for about three years with a tracksuit and top etc, but then the firm changed hands and they dropped all the sponsorship.

“Fortunately I’ve worked all my life and never been a smoker or a drinker so I use my savings and pension. It’s something I absolutely love so I don’t regret it.”

If he does have one regret, it is maybe not focusing more on athletics as he emerged from his teenage years. After starting national service with the RAF he became intimidated by the increased height of hurdles as he got older and temporarily quit the sport. Still, he had great fun at the time as a young hurdler.

One of his amusing memories involves racing on grass at Twickenham where his shorts literally began to fall down during the race. “I was wearing a pair that my mum made because we didn’t buy shorts in those days, we had them made for us,” he remembers. “I reached down to pull them up and a guy whizzed past me to pip me on the line!”

These days Bowman makes sure he buys shorts with stronger elastic. Lately he has also used the pandemic-hit period to alter his technique. He says it’s been “a bit of a drag” to pace out his own hurdles on the hockey pitch but he has taught himself to hurdle with his weaker leg.

“I never realised how difficult it could be,” he explains. “It’s like trying to write with your other (weaker) hand. I’ve been practising for 12 months and I’ve just about cracked it now. I can hurdle with alternate legs but I need a race now to try it out.”

He adds with caution, though: “You have to be careful hurdling at my age. I realise that. But I think to be honest I’ve had more falls as a kid than I do these days. I once fell when I was about 13 at the White City and I think I still have the cinders buried in my knee now.”

By staying fit he hopes he will keep any health problems at bay, too. “I was having problems with my breathing due to atrial fibrillation,” he says. “I had a jump leads on my chest a couple of times and then a procedure when they go through the groin and burn the inside of the heart. But at the moment my heart seems to be okay.

“I had a dose of the virus in March and that brought on atrial fibrillation again but gradually it’s subsided, and I train back to normal most days. And I never give it a thought that I should reign it in or anything. I just go for it!”

Sadly his wife did not recover from the virus. “We definitely had it (coronavirus) because my wife, myself and son had it. Myself and my son were in bed ill with it for a couple of days but unfortunately it took my wife. She passed away six days after contracting it in March. And because she was in an intensive ward, I never got to see her.”

Bowman himself is still going strong, though. His goal? To reach the age of 120!

“You ask me what’s kept me going. I think I’m one of these very fortunate people. Not only do I do a lot of sport but I’m keen on dancing – ballroom, salsa, jive, cha-cha-cha, all that jazz – and I’ve won competitions with my dancing partner with Strictly Come Dancing people like Craig Revel Horwood judging. That all helps to keep me young.”

His advice to ageing athletes who want to succeed? “Well, a lot of it is in the genes,” he says. “But if you’re enthusiastic for the sport then that counts for a lot. What can I say? Just keep at it.”

He reckons more older athletes should do shorter and more explosive events too. “I see a lot of people pounding around the streets because they want to do the London Marathon or a 10km. When they were at school, they weren’t doing that. They would be doing things like sprints.

“There is a whole wonderful world of masters athletics where you can do events all over the world – every track and field event, male or female – and so many people don’t seem to know about it but instead they spend their time pounding around the streets.

“They should try sprinting or high jumping or throwing the shot, discus or javelin.”

» This is an edited version of a feature that first appeared in the December issue of AW magazine, which you can buy here