Natoya Goule on the rise 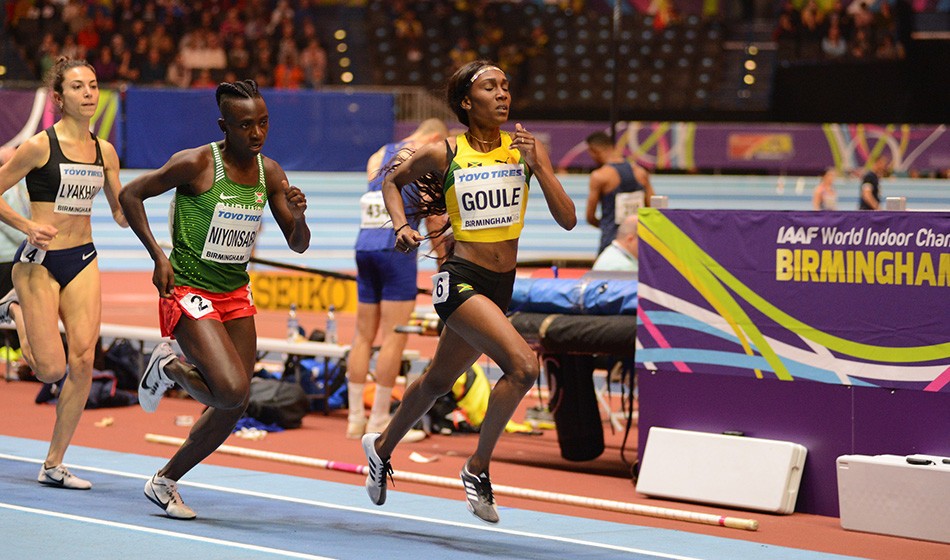 Natoya Goule heads to the Müller Grand Prix Birmingham fresh from winning the 800m at the Pan American Games, which came after a second-place finish at the Herculis Diamond League meeting in Monaco.

Doha will be the 28-year-old’s fourth world championships, but it is in the past two years that she’s established herself as a real contender.

The change came in 2018 when she broke 1:59 for the first time, something she attributes to a change in training.

“I started taking my long runs seriously,” the Jamaican tells me. “I used to train hard on the track but on long runs I didn’t monitor it with my watch, I just went out and ran.

“Then I started monitoring my runs and pacing myself better. That was one big change that I made. Also my diet.

The breakthrough came when she took bronze at the 2018 Commonwealth Games, behind Caster Semenya and Margaret Wambui.

“I barely made the final,” she recalls, “because in the heat three of us were running and the others cut in on me and I virtually had to stop and start running again.

“I came second in the heat but I almost missed making the final.

“In the final I decided just to follow Margaret Wambui. Every move she made I just followed. Then I started to kick. I almost got silver but I’m very grateful for bronze.”

Giving God thanks for my achievement today. Without him I wouldn’t be able to won Jamaica’s 1st ever gold medal at Panam Games. Thanks also to my coach Mark Elliott for being the best coach ever and to @jtop_ for being everything a girl could possible want. Also thanks to everyone who cheered me on and my family for always supporting me love you all.

In the years 2013-2017, she was in three outdoor and two indoor world championships, an Olympics and Commonwealth Games without making a final but she continued to believe in herself.

“Looking back, I see myself coming from afar because every time I was the last one to qualify for the next round. But I didn’t give up. I just had faith.

“Sometimes I felt bad, but I always tried to say ‘whenever God is ready’ because he always enabled me to run the times to get to the competitions so when he’s ready he will enable me to run the way he wants me to.”

“I cried after that race,” she says. “I knew I had run fast, perhaps 1:57, but I didn’t know it was 1:56. When they showed it to me I lay down the ground and started crying. I was really happy because God came through.”

“I made a couple of mistakes in the race like being on the outside almost all the race and I tried to pass on the curve,” she says. “Because it’s a long curve I really didn’t know where the 150 mark was. I should have been more patient.”

I have to ask how she finished up being a middle-distance runner rather than another Jamaican sprinter?

“I honestly don’t know why Jamaica does not have many world-class 800 metre runners,” she replies. “We have lots of juniors growing up who can run the 800 but then they shy away from the event to do other distances.

“In our DNA we’re supposed to be able to run distance – 800 all the way up. But a lot of people don’t want to, they prefer to be sprinters or do shorter events.

“But based on where our DNA came from, we should be able to run distance well in Jamaica.

Having already been selected for Doha, she sees every race now as a stepping stone to the IAAF World Championships.

“But I am happy to be at the place I am where I know I will continue to strive and push forward,” she adds. “I tell myself I want to do really well this year to continue the success from last year into this year.

“My season didn’t start as I wanted it to but I think now is the right time because it’s a long season. So being at the stage I am right now, I think it is perfect.”