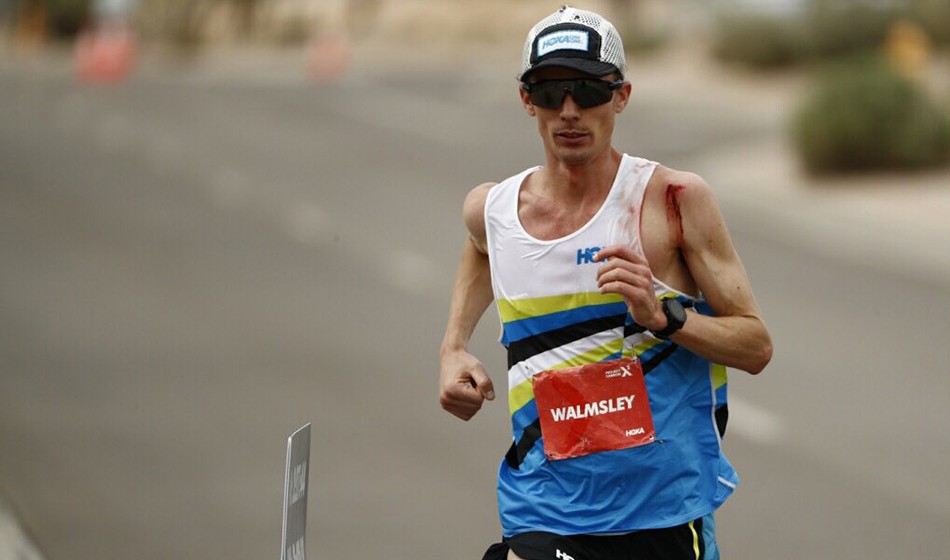 American is an agonising 12 seconds short of the record as he goes second on the all-time list with 6:09:26 in Arizona

After more than six hours of running, Jim Walmsley missed the world 100km record by just 12 seconds as he clocked an impressive 6:09:26 at the Hoka One One-organised Project Carbon X 2 event in Chandler, Arizona, on Saturday (January 23).

Nao Kazami’s 6:09:14 set in 2018 had been the target and Walmsley remained on pace through 95km but as he glanced at his watch during the final stretch it appeared that the record might be narrowly out of reach.

In a dramatic finish, after nine laps of the roughly 11km circuit, he crossed the finish line with arms outstretched, a bloody gash on his left shoulder from an earlier clash with a fence post and a performance he later described as “a little bittersweet”.

He had gone through 50km in 3:04:15 and ran with incredible consistency.

Walmsley’s finishing time puts him second on the world all-time list behind the mark set by Japan’s Kazami at the Lake Saroma 100km in Hokkaido and improves Max King’s American record by more than 18 minutes.

“It definitely feels like one of the more special runs I’ve had,” said Walmsley, who won the long-distance world mountain running title in 2019 and holds the Western States 100 (miles) record.

Speaking on the Hoka One One live stream, he added: “It really felt like I got everything out of myself today and dug really deep and fought all the way to the line. I don’t feel like I gave up but it was tough to see the seconds tick by.

“It’s a little bittersweet but definitely rewarded with an American record today and those don’t come very often.

“It was a pretty amazing day.”

Molinaro, who last year broke the women’s Land’s End to John O’Groats record when she ran the length of Britain in 12 days, 30 minutes and 14 seconds, finished fourth in 8:01:22.

Camille Herron, the 2017 Comrades Marathon winner, dropped out after 65km with hip pain.

All athletes were wearing the new Hoka One One Carbon X 2 shoe.

See the February edition of AW magazine for a review of the Carbon X 2, as well as the brand’s other carbon plated road racer, the Carbon Rocket X.