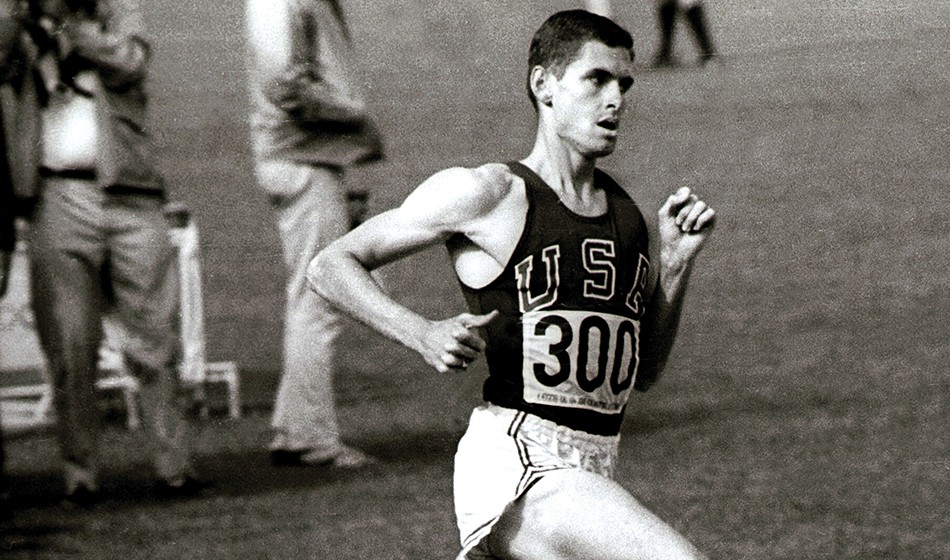 Steve Smythe looks again at great milers of the past and makes perhaps a surprising choice as the world’s fastest ever finisher, often overlooked as he was at his peak well over half a century ago

There are some races you think the way the race was run on the day that no one one could have beaten the actual winner.

I would include Seb Coe’s two Olympic wins, but also from that era Steve Ovett’s 1977 World Cup and 1978 European victories and Steve Cram’s 1985 Dream Mile and 1986 European successes.

No one has ever run faster in a major championship than the Moroccan but winning times don’t always tell the whole story and you have to take into account the era, the track, the opposition and training as well as the tactics.

Jack Lovelock in the 1936 Olympics, Roger Bannister in the 1954 Europeans and Herb Elliott and Peter Snell in their 1960 and 1964 Olympic wins all looked at a different level to their opponents and what had gone before.

His successor as the world’s best though, Jim Ryun, went on to produce finishing bursts that definitely would have won him modern medals in slow run races and apart from the unhelpful surfaces, remember there were no wonder shoes back then.

For example, Ryun produced a 23.9 last 200m to win the 1966 NCAA Mile Championships and in my view his finishing speed was not only unprecedented and decades ahead of its time but was as destructive as any runner in history.

A year later he was setting a world age-16 best of 4:07.8 and at 17 he became the first high-schooler and youngest ever sub-four-minute miler with another age best (3:59.0) and he ran in the Olympics.

In Tokyo a bad cold meant he didn’t survive the semi-final, though even fully healthy it might have been beyond him at that stage of his development.

At the age of 18 though he improved to 3:55.3 in beating Snell and was clearly on his way to becoming the world No.1.

In 1966 and 1967 he was smashing world records and would surely have won the 1968 Olympics had it not been for the high altitude.

He was never quite as dominant in later years but was in great shape in 1972 – certainly enough to medal easily at worst – but fell in his heat.

He went professional shortly after that and later served in the United States House of Representatives from 1996 to 2007 and in 2020 he received a Presidential Medal of Freedom from Donald Trump.

Here we highlight 20 of his greatest or most significant races.

For more on Ryun and some of his other races see our Clubhouse section here. 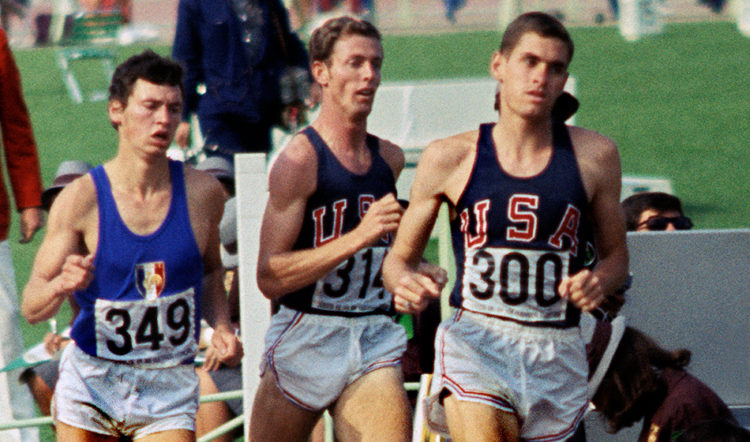 1 Compton Invitational Mile, June 5 1964
8th 3:59.0
A few weeks earlier he had run a 55.7 last lap for a world age-17 best of 4:01.7 and he took nearly three more seconds off his mark with a 56.2 last lap in a faster race against the best US senior milers headed by Dyrol Burleson (3:57.4). He was far and away the youngest ever sub-four-minute miler and first ever high-school athlete to achieve that feat.

Foot and knee injuries prevented Ryun from building on his successes in later races in 1965.

5 Coliseum Relays 2 miles, Los Angeles, May 13 1966
1st 8:25.1 (US record)
He showed that, though still a teenager, he had now also built good endurance as he outkicked Grelle and new star Kip Keino who had run a 3:54 mile and was the 3000m and 5000m world record-holder. Ryun was only a few seconds from Michel Jazy’s world record and went third all-time with another American record.

This meant he took well over a second off his American record and only missed Jazy’s world record by a tenth of a second.

Snell had passed 800m in a then unprecedented record 1:44.3 during his half-mile record. No time was taken for Ryun but it was probably 1:44.1 and no one would run quicker until 1973.

He was unable to produce his usual kick but he powered past 1500m in an US record 3:36.1 (the second fastest in history) and completed a 56.0 final circuit to take over two seconds off the world record.

He was still a junior at 19 years and two months old. Cary Weisiger was a distant second in 3:58.0.

The record would last eight years.

Records were on no one’s mind as the field jogged the first 200m before Dave Bailey of Canada upped the pace but the first 440 yards was still a pedestrian 60.9.

Keino, who had run a 3:53.4 mile to go second all-time in 1965, knew he had to pick up the pace and he blasted the second lap in 56 seconds with Ryun still close behind.

Ryun drew up alongside Keino and then exploded. Despite the fast pace he ran the next 200m in 26.1. He tied up slightly in the finishing straight (13.5 for the last 100m) but he still opened up a four-second gap on Keino (3:37.2) in less than 300 metres and took over two and a half seconds off Elliott’s celebrated world record – the biggest margin of any 1500m or mile record in the whole of the IAAF era which started in 1912.

This time with just the four kickers in the match race there was little interest in a fast pace.

A cautious race saw three slow laps and then a 50.8 final circuit as he easily beat Marty Liquori (3:49.5).

Keino’s team-mate Ben Jipcho blasted a 56 first lap and then Keino powered ahead and passed 800m in 1:55.3.

Tummler, Norpoth and Britain’s John Whetton were still within five to 10 metres but Ryun (1:58.5) was sticking with his plan that said 3:39 should win.

Everyone expected Keino to fold after his extravagant racing and pacing but instead he ran a 58.1 third lap up to 1200m and was eight metres ahead of Tummler and Norpoth with Ryun closing slightly (2:56.0).

Ryun accelerated and passed the two Germans but made no impression on Keino, who powered away impressively and his 55.9 last lap gave him a clear win in an Olympic record 3:34.9 to go second all-time to Ryun. 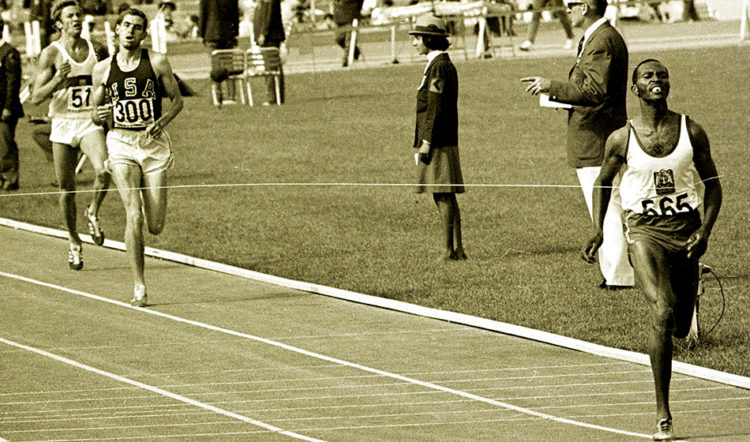 17 Martin Luther King Games Mile, Pennsylvania, May 16 1971
2nd 3:54.8
Liquori was now considered the world No.1 though Ryun ran a 3:55.8 to win in Kansas in April to prepare for this match-up between the two Americans which was hyped as the mile of the century.

The early pace was slow as they both hovered near the back in 61.4 and 2:01.3. Liquori began a long drive on the third lap and completed it in 56.7. He further picked the pace up with Ryun still right behind. On the last turn, Ryun moved beside but he was unable to get by and Liquori won by just over a yard in a PB 3:54.6 courtesy of a 1:51.3 second half and 54.6 last lap.

In the trials, Ryun was only sixth at the bell and still too wide and far back at the start of the last bend. However, his sprint along the final straight was incredible as he ran the last 200m inside 25 seconds with a final 320 yards timed at 36.6 and his 51.5 closing circuit (after a slow start to the lap) left ace-kicker and future Olympic 800m champion Wottle (3:42.3) six metres behind.

20 Olympic Games 1500m heat, Munich, September 8 1972
9th 3:51.5
While running near the back of a slow heat he was tripped and fell very heavily, injuring his hip and ankle. Though he eventually got up and chased after his competitors he was some way from qualifying and an appeal was thrown out.

The heat was won by Keino (3:40.0) and Ryun was drawn in the same heat as the computer thought his submitted 3:52.8 was a slow 1500m rather than the top-ranked performance.

Judging by Ryun’s July form, only Munich winner Pekka Vasala could have seriously challenged the American in the final. Keino finished second. Ryun turned professional with the ITA circuit in 1973 but never regained his full fitness.