Award-winning Laura Muir ready for the next chapter 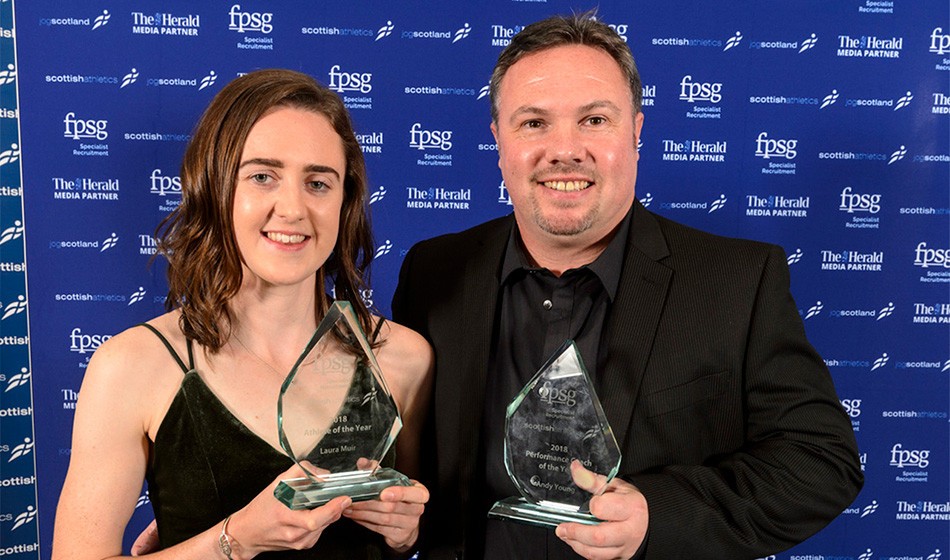 The emotion got to Laura Muir as she capped what has been another year to remember by winning the Scottish Athletics FPSG Athlete of the Year award in Glasgow on Saturday.

There was more than a tear in the eye of the 25-year-old, her voice cracking as she paid tribute to Andy Young, himself named Performance Coach of the Year on the night, her family and friends for helping her accomplish the thoroughly exhausting feat of completing her veterinary degree while also keeping her place at the top of the athletics tree.

Muir did, in fact, finish 2018 ranked No.1 in the world and 1500m Diamond League winner – the distance at which she became European champion outdoors and world silver medallist indoors. There was also a bronze medal over 3000m at those championships in Birmingham.

Now next year’s European Indoor Championships at Glasgow’s Emirates Arena move into view as the next big target, while there will also be the small matter of the 2019 IAAF World Championships.

Before looking ahead, however, Muir did allow herself a moment of reflection after winning this award for the third time.

“This year has just been so tough,” she said. “I knew it was going to be really hard but to try to keep my training at such a high level in my final year, when I was working nights and weekends. I was permanently shattered.

“When we had the world indoors, a home championships, the Europeans, my first chance to win an outdoor title, there was a lot of pressure. To have that home champs, to pass my finals. Everyone knew it was my final year, everybody would know if I failed. So I thought ‘I’ve got to pass my exams’, I just thought it was so important, and to do well in Berlin as well.

“It was a really big year, not just physically doing everything, but mentally as well – juggling all that pressure and expectation.

“It worked out pretty well. It showed me what you can do. Everything can be against you and you can still end up doing pretty well.”

There are changes afoot in Muir’s life. Not only has she just moved house but she is now adjusting to being a full-time athlete – not that the juggling act has necessarily stopped.

“I’ve only kind of had five or six weeks as a full-time athlete and it has been really busy,” she said. “There have been so many things over the years, I have had a backlog of things to do. Things I never had the chance to do. Various appointments and meetings with people, just sorting my life out really.”

There will be considerably more time for Muir to devote to her chosen sport, however. While some part-time voluntary veterinary work is an aim when her schedule allows, going full-time offers the opportunity to delve further into the finer details.

“Paying more attention to different aspects of training,” says Muir. “Getting to training early, doing my stretching, so I am not rushing around at the last minute.

“It would be nice to learn a bit more about myself. Doing different biomechanical stuff, improve those one per cents that I haven’t had time to do before. Paying more attention to running technique, more fine-tuned, nutrition and all that stuff.”

The hope is that adding all of those one per cents together results in further major success.

Muir was presented with her award on Saturday night by 2004 double Olympic gold medallist Dame Kelly Holmes, who introduced the winner as “your future Olympic champion”.

“I have already got my mind set on Tokyo, although there is obviously Doha (world championships) next year. With that being so late in the year, there is going to be a very quick turnaround, especially with Tokyo being so early.

“Hearing her (Kelly’s) story and knowing in myself, I know that I perform best when I am relaxed and just enjoy it. I run better when I have that mindset. I am going to go in to Tokyo really relaxed, I know there is going to be a lot of pressure but at the same time I am there to enjoy it, it is the Olympics. I am going to be the best that I can be out there and the best way to do that is being myself and relaxed. We’ll wait and see.”

As well as the annual awards, 15 athletes were inducted into the Scottish Athletics Hall of Fame