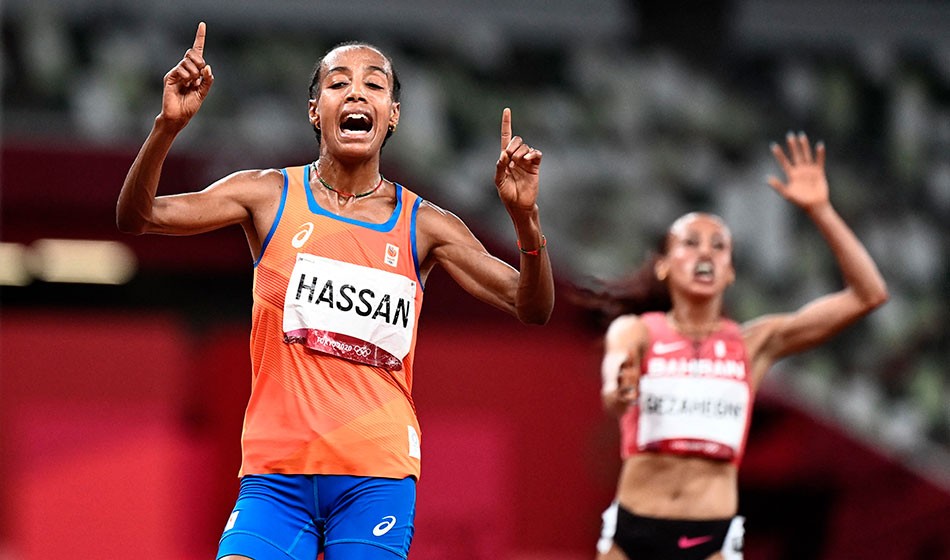 In what was her sixth race in Tokyo, and after 24,500m of track running, Sifan Hassan won 10,000m gold to achieve an unprecedented Olympic distance running treble.

The Dutchwoman became the first athlete to win medals in the 1500m (bronze), 5000m (gold) and 10,000m (gold) in a single Olympics. Despite her huge workload in Japan, and this race coming less than 24 hours since she had contested the 1500m final, Hassan won the 25-lap event with relative ease, even though Letesenbet Gidey set a torrid pace in stifling heat and humidity.

Ulimately, the winning time was 29:55.32 and it was Bahrain’s Kalkidan Gezahegne who ran Hassan closest as she took silver in 29:56.18, while world record-holder Gidey had to settle for bronze in 30:01.72.

“I’m so happy it’s over and I survived,” said Hassan, who was given treatment trackside after crossing the line. “I was dead before the start. The last two laps I was about to collapse and I tried to hang on. When I warmed up I was telling myself that I’m so stupid [for attempting the treble] but it was do or die!”

The Japanese athlete was still ahead at 2000m but soon relinquished her lead to Gidey, who had been outkicked by Hassan during the World Championships final in Doha. The Ethiopian reached 3000m in 9:10.05 at the head of a 15-strong group which included Eilish McColgan in eighth. Jess Judd was in 22nd, but both Britons were well ahead of their PB pace at this stage.

Gidey began to up the pace and her 4000m time of 12:10.4 saw the contenders whittled down to eight, with McColgan having to give way.

At halfway, reached in 15:08.3, there were only six remaining as Gidey was pursued by world 5000m champion Hellen Obiri, Hassan, Gezahegne, Kenyan 2017 world cross-country champion Irene Cheptai, European champion Yasemin Can. Not far behind, remarkably, came the 2016 Olympic 800m silver medallist Francine Niyonsaba. McColgan was still on course for a PB in 10th (15:19.2) with Judd 20th (15:37.0).

Gidey showed no signs of relenting and indeed picked the pace up further with a sixth kilometre of 2:56.0. Now she had just Hassan, Obiri and Gezahegne for company as Cheptai fell off the pace, with the incredible Niyonsaba up to sixth and moving away from Can.

The seventh kilometre was again a relentless 2:57.0 and as the pace even reached a 69-second lap it proved too much for Obiri around the 8000m mark.  Hassan and Gezahegne were still there, however, while McColgan now sat 13th and Judd 17th.

Gidey had thrown everything in but was now getting frustrated and gesticulated at Hassan, who was lingering on her shoulder. The pace dropped to 74 and 75-second laps as she reached 9000m in 27:02.2 with Obiri an isolated fourth.

It was clear that Gidey would make one more last effort and it came at the bell when she ran 32.1 seconds for the opening 200m of the final lap. Her two pursuers did not look rattled, though, and Hassan easily moved by on the last bend.

She still didn’t kick but it was clear Gidey had nothing left and Gezahegne shot by in the wake of the Dutch runner. Now Hassan stretched out and, though the Bahraini followed, the race was run.

The winner had covered the last 100m in an astonishing 13.6 seconds – faster than Athing Mu and Faith Kipyegon in their 800m and 1500m wins.

The first three athletes were Ethiopian-born but in this race the nation was only taking a bronze in what has been a below-par championships for them after starting so well in the men’s 10,000m.

Obiri trotted in an isolated fourth but still produced a PB of 30:24.27 as Niyonsaba finished in a stunning fifth place in a Burundi record of 30:41.93.

Fifth and second in the past two Olympic 800m races, the two-time world indoor champion had to reinvent herself as an endurance runner due to the DSD rule changes at 800m and 1500m. She also bounced back from being disqualified in the 5000m heats for a lane infringement as she produced a run which was arguably even more remarkable than Hassan’s.

Cheptai set a PB in sixth in 30:44.00 in what hasn’t been a great championships for the Kenyans, while early leader Horonaka did well to finish seventh in a PB 31:00.71. 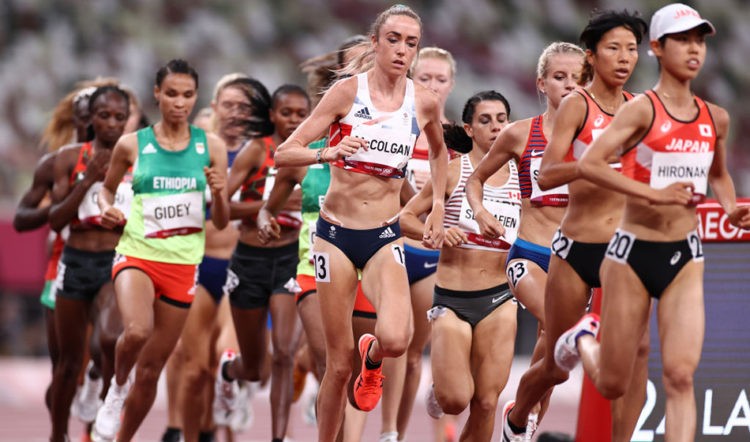 “It was tough – definitely one of the toughest races I’ve run – so I’m proud of myself for finishing,” said McColgan. “There were definitely points where I didn’t think I was going to make it, but I just wanted to have a better race than I did in the 5000m.

“I definitely feel there’s more in me, so it’s  given me a lot of fire for the end of the season.”

Judd finished 17th in a highly respectable 31:56.80, while the five non-finishers included Ethiopia’s Tsigie Gebreselama, and her compatriot Gemechu was disqualified in the last 200 metres while in ninth place.

Judd said: “It was just so hard. I felt like I was doing the right thing at every point and then it just got even harder. With 2km to go I just thought ‘I’ve just got to finish’.

“The hardest race I’ve ever done. I didn’t think I was going to get round, but I did, which is good. I was thinking don’t do anything silly, you just realise you’re so hot, I was like I’m really overheating now, and then you try and tell yourself I’m not hot, I’m fine, but I couldn’t have done any more.

“To be honest I don’t remember much of the last 600m because I think my legs were just burning, I was just weaving in the last 100, I thought I’m not going to finish, but my aim when it was all going wrong was to get under 32 minutes, because I hadn’t done that before this year, and it was a good thing for me.”