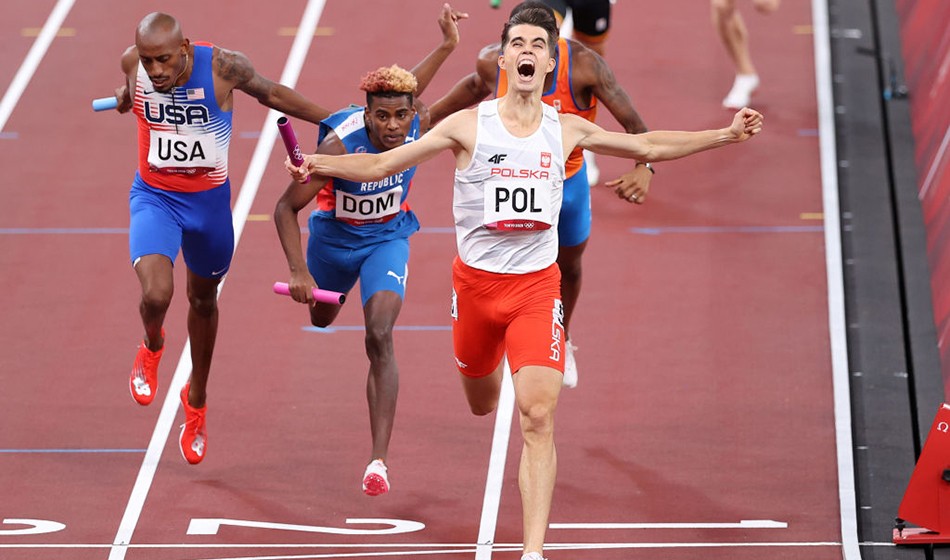 Surprisingly, despite their reputation in the long relay, Poland’s women have never won an Olympic medal and the men have only won one – a silver back in 1964!

Many dismissed their chances as their two selected men – Karol Zalewski and Kajetan Duszyński – were ranked 31st and 60th in the world this year at 400m but both ran brilliantly along with the more celebrated European champion Justyna Swiety-Ersetic and Natalia Kaczmarek.

Whether the event is worthy of an Olympic spot, having been so infrequently contested, is up for debate and its placing in the timetable suggests not everyone is convinced of its future. The scheduling meant some teams could have been stronger, with Sunday morning’s men’s 400m heats not helping. A USA team of Allyson Felix, Athing Mu or Sydney McLaughlin and Michael Norman and Randolph Ross or Rai Benjamin, for example, would have surely won by a huge margin.

In the end Poland won surprisingly easily by around three metres from Dominican Republic and USA, who were thrown out of the final after indiscretions in their semis but were reinstated late in the night.

The Dutch gambled by bringing in Femke Bol, who had run the 400m hurdles heats earlier in the day, but clearly thought that might make the difference to their medal chances. Hopefully the European indoor champion won’t pay the price in her upcoming hurdles semi-final.

Earlier in the day Britain had won gold medals in two new mixed relay events – in the triathlon and the 4x200m in the swimming pool – but the track athletes couldn’t match those podium-topping exploits here, despite a brave effort.

Britain changed their team from the heats, with Niklas Baker replacing Lee Thompson and Nicole Yeargin coming in for Zoey Clark, as they chose not to field national champion Jodie Williams. They were also 0.12 slower than the British record they set in the heat.

How the race unfolded

It was the Dutch who led the first leg thanks to a 44.8 for Liemarvin Bonevacia, with USA’s Trevor Stewart second in 44.9 and Zalewski third in 45.1. Baker was officially ninth in 46.2.

Dominican Republic went ahead on leg two thanks to a stunning 48.7 from Marleidy Paulino, establishing a lead of more than a second from Poland (Kaczmarek 49.9) and USA (Kendall Ellis 50.2). Britain were up to sixth thanks to Yeargin’s 50.6, though she was treading water in the straight having started too fast to make up lost ground.

The Briton said: “I think we can be proud of ourselves – we finished sixth in an Olympic Games and the first mixed relay, so we’ve made a little bit of history, and I think it sets up the team for the men’s and women’s relays at the end of the week now.”

On the last leg, it was Duszynski who looked nothing like the 60th-ranked 400m runner in the world with a stunning and assured 44.38. Vernon Norwood ran a similar time to the Pole – with a 44.43 but was too far back to get the Americans higher than third.

Belgium’s Kevin Borlee ran a 44.21 final leg – the quickest of the day – which passed a still highly respectable 44.79 from Chalmers.

Chalmers said: “It’s definitely the biggest race I’ve ever been in and to run on the last leg with these guys at the Olympics is just an amazing experience – something that I’ll definitely keep in my memory forever.”

Jamaica and Ireland suffered in the melee of the changeovers and were seventh and eighth in 3:14.95 and 3:15.04 respectively with Germany, who were added as a ninth team after being in and out with the disqualifications, paying the price of there being too many athletes on the track and being disqualified themselves.