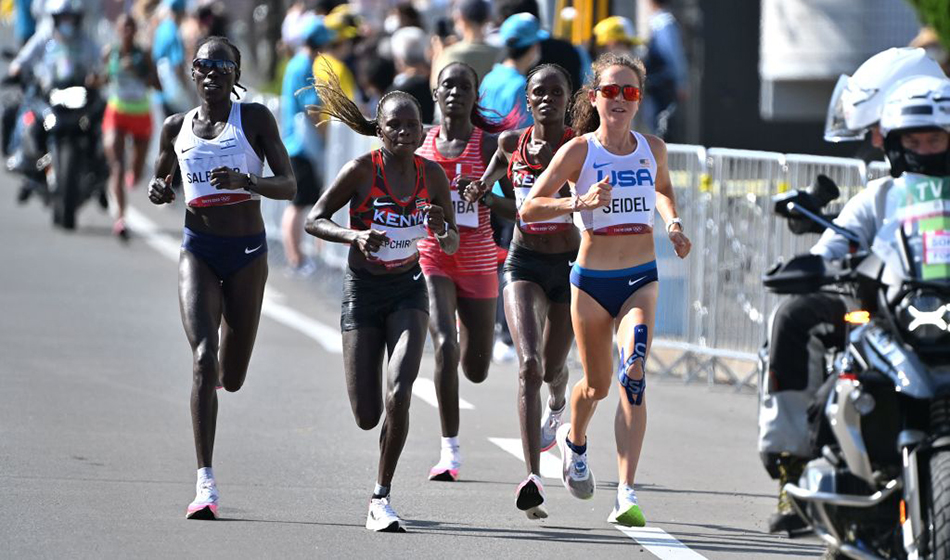 While she is a relative marathon novice, she is not at half-marathon where she has run 65:06 and 65:16 world records and won the half-marathon title. Racing in Sapporo early on Saturday morning, she proved too strong for world record-holder Brigid Kosgei as she covered the second half in 72:06, three minutes faster than the first.

US trials runner-up and relative marathon novice Molly Seidel was a surprise third. The former NCAA 10,000m champion was running her first major international event and was close to Kosgei even though her PB was over 10 minutes slower! She set her PB in London in 2020 where she finished sixth. 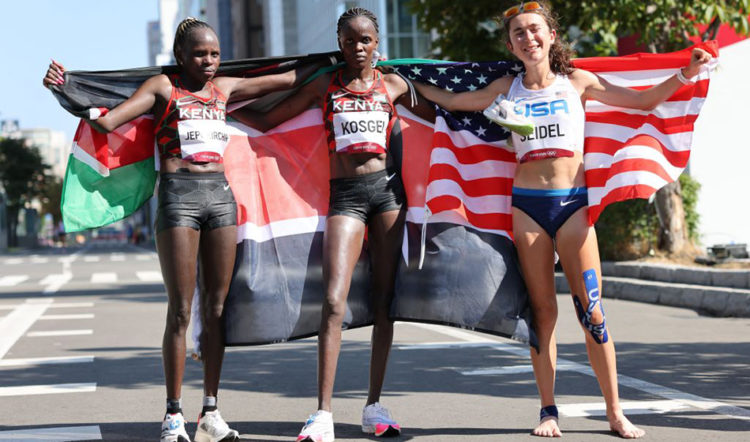 The race started gently in temperatures around 27C and 80% humidity at 6am – an hour earlier than planned due to it being warmer than than expected – and the temperatures climbed throughout the race making it a true ordeal.

Athletes were handed bags of ice and many tried various methods of balancing or placing the ice on their forehead.

Honami Maeda, a 2:23:30 runner who was second in Osaka, was the early leader, running out on her own but she was soon reeled in.

As they hit 5km, world champion Ruth Chepngetich and race favourite Kosgei were the official leaders in 18:02 as they came to the front to get a clear run-up to the feed station, although the lead pack numbered 76 and was spread over 18 seconds with the three Brits toward the second half of the group from 42nd to 68th.

The pace picked up a little on a climb but as they reached 10km, the watch revealed a slightly slower second 5km of 18:12 and this time it was Jepchirchir (36:16) who was in front alongside European 10,000m champion Lonah Chemtal Salpeter of Israel.

There were 86 still running according to the stats although it seems Ayuko Suzuki had lost her chip as she was no longer showing on the computer.

The pace did pick up a little through 15km with Chepngetich still officially first in 53:47 alongside 2019 London third-placer and 2:18:30 marathoner Roza Dereje. That 5km occupied just 17:31 – over 30 seconds faster than the previous fastest.

Ethiopia’s 2:19:28 marathoner Zeineaba Yimer, who has a 2:19:28 PB, became one of the race’s first major casualties around the hour mark and pulled out.

In the 34th kilometre as it came to around two hours of running it was down to five and the splits confirmed the speed was picking up even more with Kosgei on 2:02:58 (16:43) alongside Jepchirchir, Seidel (who had done much of the leading), Salpeter and Chumba.

Shortly afterwards, Chumba dropped off and then at 37km it was Seidel, who was running way above what you’d expect from a 2:25:13 runner, who dropped back.

Shortly after that Salpeter had to give way and Seidel revived and soon got back to the Israeli who, as the American edged ahead, gave up and stopped her watch.

It was now seemingly down to the two Kenyans with Jepchirchir ahead of Kosgei but Seidel was holding the gap.

During the 41st kilometre Jepchirchir kicked away with a long bouncy stride and looked like the gold was hers and she won by 16 seconds with a further 10-second gap to Seidel, who roared with delight as she crossed the finish line.

Both Twell (2:53:26 and 68th) and Piasecki 71st in 2:55:39 did well to finish after struggling so early in the race and the drop-outs included Chepngetich and two Ethiopians.