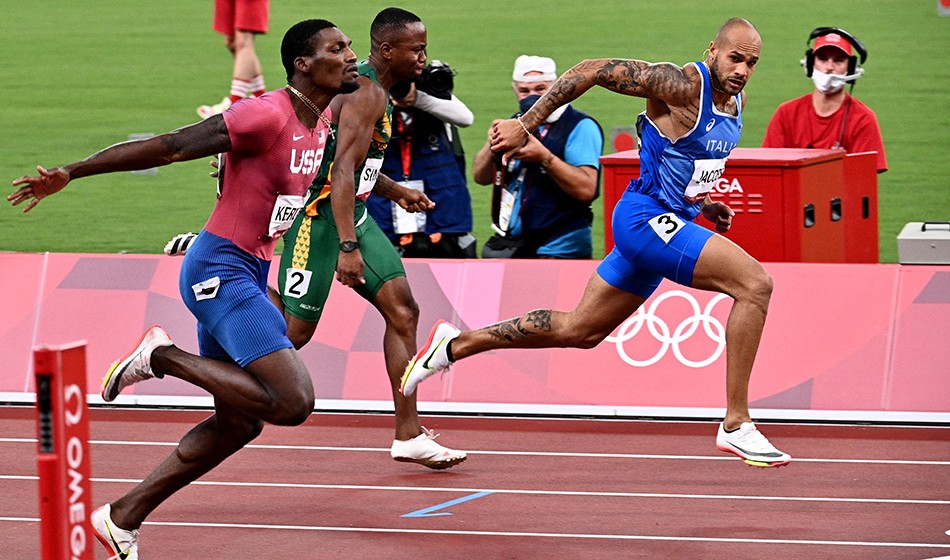 Up until this year, Lamont Marcell Jacobs had never broken the 10-second barrier for 100m. Now the man who until not so long ago viewed himself more as a long jumper is the Olympic champion after what was an unforgettable sprinting contest in Tokyo.

The Italian became the nation’s first ever Olympic medallist in the event on Sunday (August 1) when he seized his chance in what had become one of the most open editions of the global showpiece in history.

Fred Kerley had made the better start but it was the European indoor champion who showed the greater finishing speed as he crossed the line in a European record of 9.80 (+0.1), while the American 2019 world championships 400m bronze medallist clocked a PB of 9.84 for silver and Canada’s 100m and 200m Rio medallist Andre de Grasse also ran the quickest time of his life for third place with 9.89.

The Italian was greeted by his compatriot Gianmarco Tamberi, who had been declared as joint winner of the high jump just minutes earlier, in what continues to be a memorable sporting summer for their country.

Jacobs had been tipped to be in the mix for a medal, but few would have predicted his rise to the very pinnacle of the sport.

There had been signs that the expected 100m order of things was going to be turned on its head during the semi-finals at the start of the evening session in Tokyo, when pre-event favourite Trayvon Bromell failed to qualify from the second heat with 10.00 (-0.2), a race which was won by Britain’s fast-finishing Zharnel Hughes in 9.98 from Nigerian Enoch Adegoke, who was also timed at 10.00.

Kerley and De Grasse progressed as planned from the opening heat in 9.96 (-0.1) and 9.98 respectively, with Reece Prescod disqualified after a false start. It would not be the last disqualification of the day.

It was the third semi which raised most eyebrows, however, as China’s Su Bingtian broke the Asian record to win in 9.83 (0.9), the same time awarded to second-placed American Ronnie Baker, while Jacobs took a fastest loser spot with his European record-breaking run of 9.84 and fourth-placed Akani Simbine of South Africa landed the last place in the final with 9.90.

Given Usain Bolt’s dominance since 2008, the fact that there was no clear favourite made the anticipation of the race all the greater and it didn’t take long for more drama to unfold in the final. 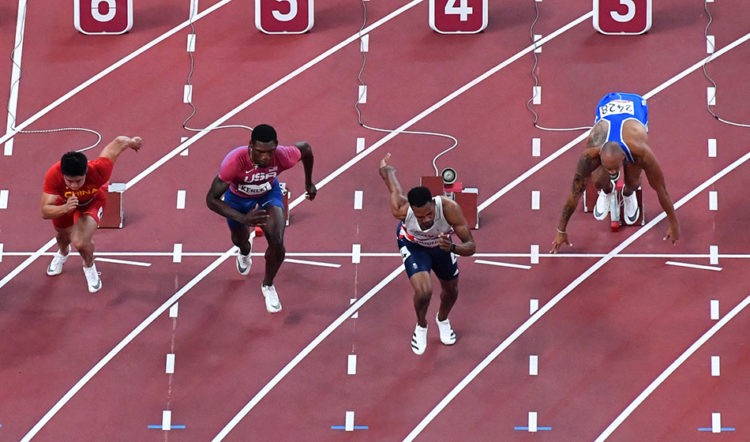 Zharnel Hughes is DQ’d after a false start (Getty)

European champion Hughes, who was disqualified at the British Championships in June, claimed a leg cramp caused him to produce one of the clearest false starts you will ever see as a very real chance of becoming his country’s first athletics medallist of these Games quickly vanished.

When the action started again, it was Kerley – a man whose decision to compete in the short sprint took many by surprise – who was fastest out of the blocks but, as he began to fade, Jacobs muscled his way to gold.

It was an astonishing feat for an athlete who didn’t even make it to the European 100m final in 2018 and only went under 10 seconds for the first time when clocking 9.95 back in May.

“It’s a dream,” said Jacobs, who was born in America but moved to Italy as a young child. “Maybe tomorrow I can imagine what they are saying, but today it is incredible.

“It was my childhood dream to win an Olympics Games and obviously a dream can turn into something different, but to run this final and win it is a dream come true.”

For Hughes, however, it was a nightmare. “I’m just sad that my calf cramped on me,” he said. “When I went up on the set position, it was so severe that I just couldn’t stay in my blocks so I ended up moving. I was ready, I was so ready.

“It just happened. I was fine, warm up and everything was okay, and as I went up on set the calf went. I just couldn’t stay there. Why here, man, why here?

“I have to try think of something positive and refocus for the 4x100m with the guys because I play a major role in the team and I need to be there. I’m really heartbroken right now.”

Prescod was similarly disappointed by his false start in the semi-finals but was making no excuses.

“To be honest it’s just my fault,” he said. “I’m not going to shy away from it, not going to blame anything, or make an excuse for it.

“I’m a professional athlete. I shouldn’t have false started – I was amped up, I was really, really amped up. It’s the Olympics but obviously now I’ve got to stay mentally strong and focus my efforts to the relay – that’s going to be fun.

“If not then objectively I still have to run this season. I’ve got to compete, so I’m not going to sit here and be devastated and cry – not going to be sad. Obviously I know what the rules are, I got a bit amped up, I false started and that’s it really.

“I’m upset because I feel I’ve let my country down a little bit and I’m very big on high performance and high pressured environments, I’ve always done well so it’s a bit upsetting for me. But I’m not going to make an excuse I’ll take it on the chin, and I’ll be back rest of the season and I’ll make sure I return for the world champs and be on fire.”

The other British team member, CJ Ujah, was fifth in the third semi-final in 10.11 and said: “I would have loved to come here and put out a season’s best to qualify for the final, but it’s just not to be.”