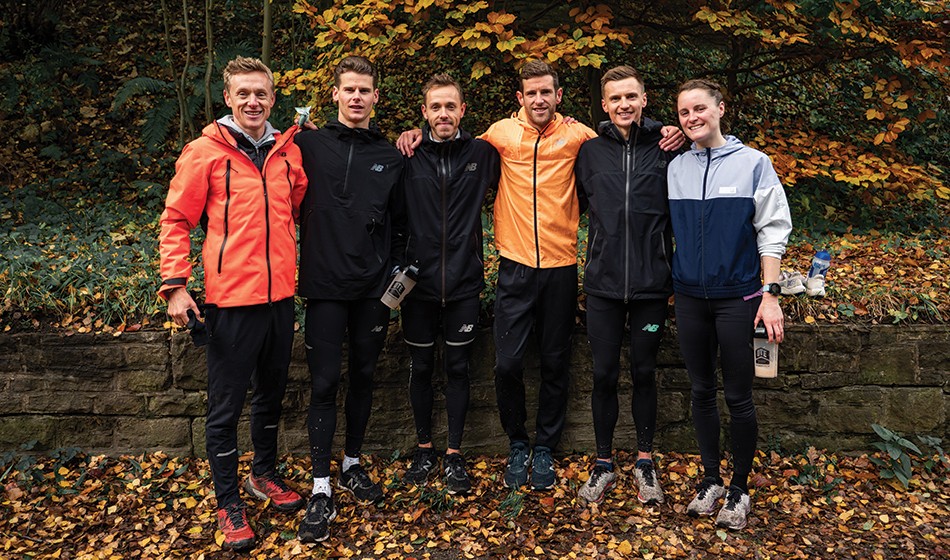 Steve Vernon and Pete Riley were coming towards the end of their international athletics careers and had begun plotting how they might turn a dream into reality. Their vision was to follow the example of the professional groups they had seen in America and create the ideal training environment which would also provide an opportunity to help young athletes who had just finished university and wanted to remain dedicated to the sport rather than having to enter the “real world” of employment.

The pair wanted to create a team, based from a house in which the athletes would live, where the collective culture would do nothing but enhance performance and develop individuals, both in their chosen pursuits and their wider lives.

Riley had begun working for New Balance in Manchester and took the idea to John Evans, a senior executive in the global arm of the sportswear giant. The starting budget was not vast but it was enough and, at the beginning of 2015, Team New Balance Manchester was born.

An athlete house was secured in the village of Marple Bridge in Stockport, on the edge of the Peak District National Park (not strictly in Manchester itself but the city reference makes the team name catchier), the athletes were put in place and Vernon began coaching. It has been a recipe for success.

One of the original Team New Balance Manchester athletes, Ross Millington, reached the Rio Olympics in 2016 and from there the snowball gathered pace. The team is now an eight-strong collection of nationalities – English, Irish, Scottish, Swedish, Swiss, Dutch – boasting an impressive array of achievements.

To find out how we got here, though, first Vernon takes us back to the beginning.

“I came back home, knowing that I needed a job,” says the two-time English National Cross Country champion who is from Stockport. “But also my coach, Dave Turnbull, was here in the best environment. For a few years we built a really good set-up where people would come from all around and train with us.

“We knew that a culture where the environment was right and you have people that are willing to work hard together, it produces results. You see it all over the world, from the groups of East Africa in Ethiopia and Kenya to the NCAA collegiate system, and then through to the pro groups in America now.

“Pete and I had always dreamed about setting up a professional team. We wanted to provide a house where they could live in it for free. If you needed a bit of money, part-time work or if you were good enough to get a bit of money through the running results then that was fair enough but we wanted to take that stress off, to [allow them to] carry on living an athlete lifestyle.

“Most of them had part-time jobs at the start but, obviously, as you run faster, you get paid more to race and, if you’re really quick, then New Balance start to pay you and that’s been the journey.”

Vernon’s leadership style, of course, sets the tone. The self-confessed student of his sport also coaches athletes outwith the team and, therefore, does not struggle to occupy his time. You sense he wouldn’t have it any other way, however.

“I think you have to be really open and transparent and you have to communicate,” he says of his approach. “You have to sit down with the athlete and understand what their goals are, what they want from you as a coach and what you expect from them as an athlete.”

Jonny Mellor is another member of the original group who remains part of the team, albeit he is no longer a resident of the athlete house.

“We have a laugh but we get the work done,” says the 2020 British marathon champion. “I think it’s key to having a positive environment in training. 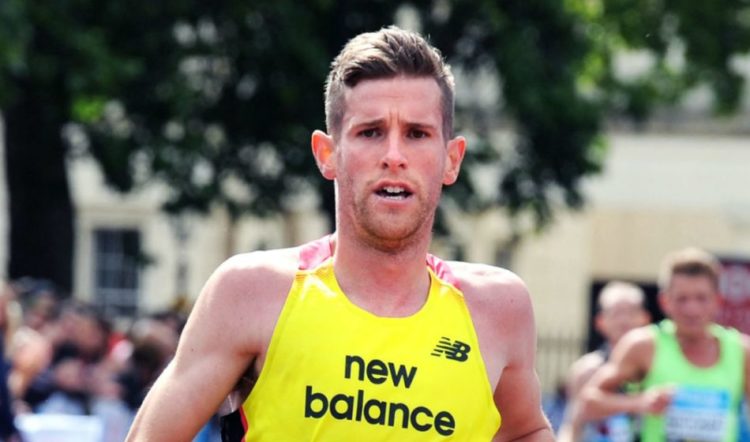 “There’s no ego and there’s always someone there that you can go for a run with or do sessions with. We’re also very fortunate to have the support network – all the pieces of the puzzle are there for us to perform at our best.

“Training is always varied and I trust Steve 100 per cent – I think I probably speak for all of the athletes in the team with that. We buy into what he’s saying and we trust the process.”

Five athletes –  Adam Craig, Jonas Raess, Anna Silvander and Jip Vastenburg (Izzy Fry has just moved in) – live in the house, but even those that don’t are close at hand. When I catch up with European Indoor 1500m bronze medallist and world finalist Ciara Mageean, also a former resident, she is having breakfast and hanging out with the group after a training run. The house is very much the heart of the operation.

“I joined [the team] in late 2017 and moved into the athlete house,” she says. “Living there was fantastic. It’s obviously great from a financial point of view but it’s more than that.

“It’s like having your friends around, especially when you’ve moved from another country. I’m from Ireland, Ana’s from Sweden, Jip’s from Holland, Adam’s from Scotland, so we’re all moving away from home and it’s like a little second family. You really felt like you had somewhere where you belonged.

“Whenever you build that environment where people are happy and they’re invested in each other, then it brings the team on so much more and I think it shows in our performances.” 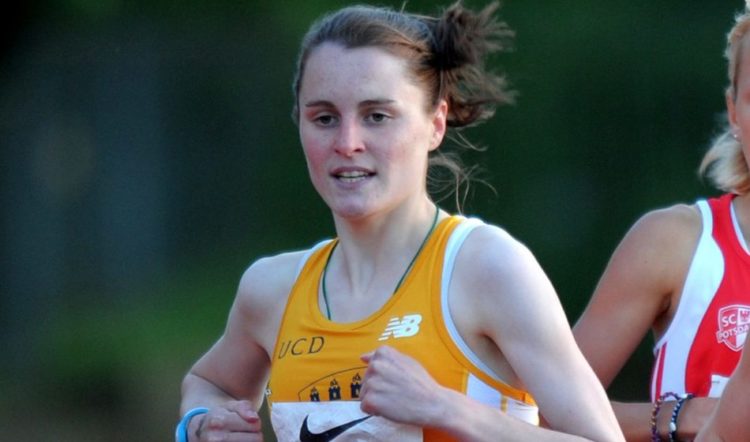 To underline Mageean’s point, it takes a little while for proud teacher Vernon to recite the achievements of his pupils.

“We’ve had some fantastic successes,” he admits. “We had Ross Millington going to the Olympics and we’ve had athletes make national teams now at every championship – European world, Olympic, Commonwealth, indoor, outdoor and road teams.

“We’ve won a lot of medals, domestically and internationally, and then 2019 was a massive year for us, because Jonas won the World University Games 5000m, Ciara won the European Indoors 1500m bronze in Glasgow and then went on to become a world finalist in Doha. The team really kicked on then and we started to have a good reputation.

“We work to help each other.”

One of the perks of being a Team New Balance Manchester athlete is the support network that comes along as part of the deal. From kit, physio and massage to gym facilities, everything is in place for high performance.

Nutrition is also a key part of the operation and the team are aided on that front by a long-standing relationship with OTE. It’s a contribution which Mellor and Mageean say has been crucial.

“I know there’s a lot of talk about the new shoe tech improving marathon times but, for me, the most important change that I’ve made in the last couple years has been using the Super Carbs drink and making sure that I’m getting enough fuel on during the marathon,” says Mellor. “[In past marathons] I was on pace and then I’d crash and burn at the end so that’s been a gamechanger for me – Super Carbs is one that I couldn’t live without.”

Mageean admits that she, too, has been impressed by the OTE range.  “When I joined the team it was a revelation,” she says. “I viewed a lot of stuff as things that marathoners used but I now use a wide range of OTE products every day.

“I use their hydro tabs two or three times a day and the whey protein after gym sessions. I use the energy gels, as well, sometimes prior to a big session and for getting ready pre-race. Say I’m at a major championship and I’m getting ready then between rounds I’ll make sure that I have a gel in my bag so as soon as I get off the track I can have it immediately to help me begin my recovery.”

Both athletes use the Duo energy bars for a pre-session boost and the Anytime bars for snacking during the day or keeping hunger at bay on event day.

However, as Mellor explains, it’s not just a case of the athletes accepting and consuming the product – it’s most definitely a working relationship.

“I still feel like I’m learning about nutrition and I’ve been in the lab with OTE and done testing as well to make sure that we are on the right track in terms of the product and how it’s affecting my performance.

“Everything we need as an athlete, OTE provides. We’ve got the tools and the product to help us achieve, perform and recover properly.”

» For a special OTE offer, CLICK HERE and use the code OTE-AW25 (note, this applies to all products excluding gift vouchers and taster pack offer)

» This feature first appeared in the May issue of AW magazine. To find out how to get a copy, CLICK HERE