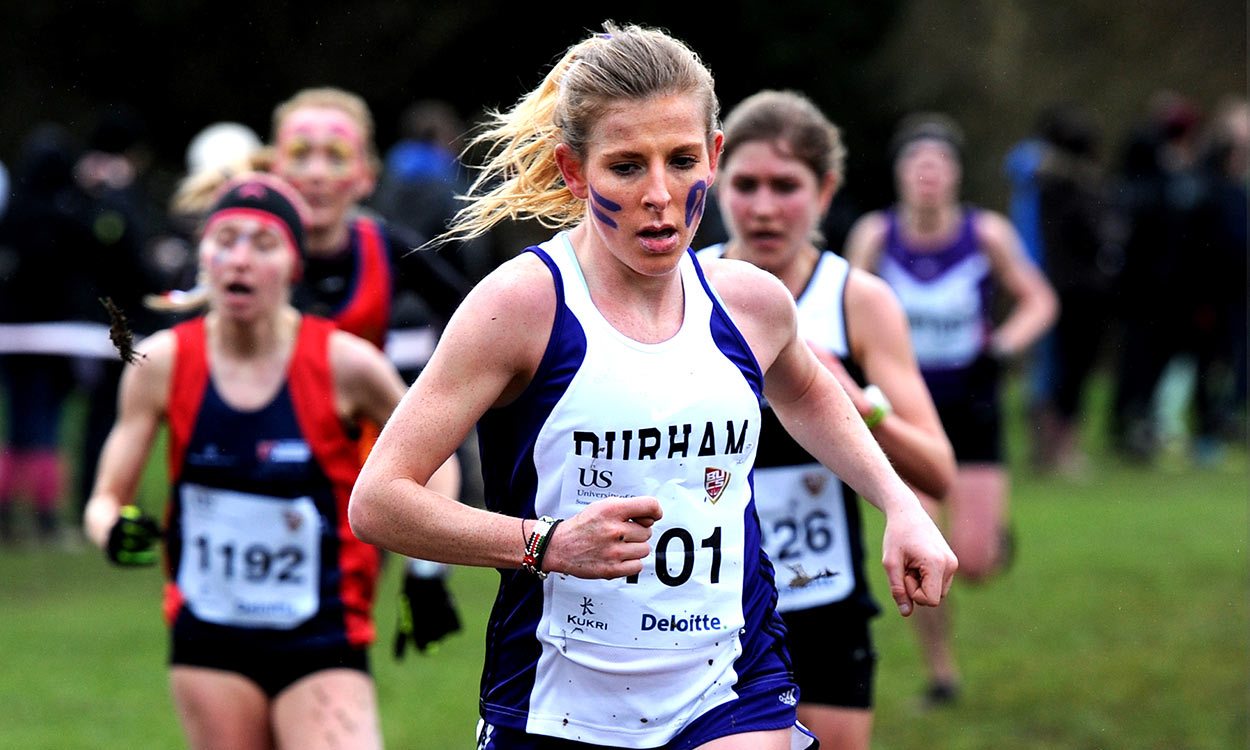 I recently spent 42 days in an air boot and on crutches. I’d like to say that, as an otherwise fit and healthy 24-year-old, this was the first time I’d been sentenced to such a fate, but that’s not the case.

But as I sat there, air boot raised, I felt compelled to share my story in the hope that it will prompt others – predominantly, but not exclusively, young female athletes – to avoid finding themselves in a similar situation.

I feel an overwhelming sense of duty to raise the sensitive, yet prevalent, issues that continue to suck in, chew up and spit out many talented young women athletes namely, ‘the female athlete triad’.

For those who aren’t aware, the triad is the result of a complex interplay of under-eating, overtraining, the (lack of) menstrual cycle and conditions related to bone health (osteopenia, osteoporosis). It is my hope that, after reading this article, any young athlete out there will feel empowered to alter their choices before wobbling off the same tightrope from which I have fallen.

I don’t have any qualifications related to sport and exercise science – other than a few related modules on my degree course – and these are reflections on my own experiences, rather than academic research.

But if I manage to tap into just one ambitious young athlete’s unhealthy habits and prompt them to make a change, I will consider this exercise a huge success.

I was a relative late starter to athletics – my main sport was football. I eventually signed up for my local club, Spenborough AC, aged 16. Little did I know how much I would fall in love with it and it wasn’t long before I decided to leave Leeds Football Academy, where I had a promising future as a fast winger.

After less than two years in the sport, I had won the English Schools cross country and 800m titles, was made a member of ‘On Camp with Kelly’ (OCWK) and earned myself a GB vest to compete in the 1500m at the European Junior Championships in Tallinn, Estonia. It was on this trip that I got a glimpse of the problems that were brewing beneath the surface.

In a routine conversation with the UK Athletics doctor, the fact that I had never had a menstrual period was brought up. I wasn’t alarmed by this because my mum had already taken me to be checked out by the NHS – I was told my lack of periods was just because I had always been sporty and nothing to worry about. However, the proactive UKA doctor explained that periods cause the body to release oestrogen which is known to be important for bone strength and health.

With a lack of periods – called amenorrhea – the opposite happens, the bones are more likely to become oestrogen deficient and more fragile.

Amenorrhea can be the result of low body weight, excessive activity or a negative energy balance – which basically means not consuming enough calories to balance out the amount of energy expended.

My weight was within the normal range for an athlete of my height at around 50kg but I was aware I had been underweight in the past (ironically before I started athletics). I did not have any obvious eating issues at the time, but I was advised not to exceed the 50 miles per week I was doing at that stage and not to exceed increases of 10% at a time in my training volume.

That same forward thinking doctor arranged for a bone density (DEXA) scan to check my bone health and recommended I take the contraceptive pill to induce a period which, despite being artificially provoked, would ensure I benefited from the oestrogen-related effects. I was put in touch with a sports nutritionist. This might sound quite ominous, yet it was very much peripheral to the success I was enjoying.

I gained my first selection for GB and that really ignited my growing love, some might call it obsession, for the sport. Suddenly, the prospect of pursuing a career as a professional athlete did not seem a million miles away.

In October 2011, I headed off to Durham University, determined to continue my upward progression in athletics. I had agreed with my coach at the time that I would just do ‘easy’ running for a month as I settled in, so by the time the European cross country trials at Liverpool came around in November, I had not yet started proper sessions. I ended up pulling out of the race – one of the only races I’ve not finished.

It was this disappointment combined with the increased freedom that came with moving away from home for university that fuelled my next block of training: I was going to make another GB team, whatever it took. Being a student away from home meant I could train when I wanted and I started doing double runs most days.

Looking back I was pushing myself very hard on every run. I actually don’t know how I did it. I was doing the sessions my coach from home set me and then occasionally doing extra ‘easier’ sessions with the university coach. Just because I could.

I was racking up 65-70 miles per week, which in hindsight, given the relentless pace and the fact that I was only 18, was excessive. But I was flying and felt completely invincible.

The DEXA scan I had done on the NHS that February had revealed a low bone mineral density indicative of osteopenia (a precursor to osteoporosis), but that didn’t worry me because by then I was having ‘normal’ (pill-induced) periods.

The summer track season kicked off in the best way imaginable: I became BUCS 1500m champion, running a PB and bagging the world junior qualifying time in the process.

I revised my PB further at the Loughborough International a few weeks later and was rewarded with selection to compete for GB in the 1500m at the World Junior Championships in Barcelona. It was there that my proudest moment in athletics to date came: I finished eighth in what was a highly competitive 1500m final running a PB of 4:12 in the process which was then the seventh quickest time ever by a GB junior.

I was granted funding from the UKA Futures programme and I embarked upon another winter of training with my main focus being to make the team for the European junior cross country championships in Budapest. I did so convincingly, finishing marginally behind my great friend, Emelia Gorecka, who was undefeated in domestic cross country at the time.

Given that Emelia was favourite to take victory in Budapest and that I finished so close behind her at the trial, I set my sights on a possible medal. I finished eighth and was disappointed, but proud to be part of the gold medal winning GB quartet.

Later that winter I was invited to attend an altitude training camp in Iten, Kenya, where I would be living and training alongside current GB athletes: my idols. Among the athletics royalty in attendance that year were Sir Mo Farah, Hannah England, Laura Weightman and Eilish McColgan.

My tendency to train hard combined with my determination not to come across out of my depth, meant I pushed to my limits on that trip. I returned to finish second, again to Emelia, at the English National junior cross country on my 20th birthday.

For almost two years, I navigated the tightrope remarkably well. I continued to train – or over-train – yet remained injury free and I was reaping the rewards in terms of my performances. It is easy to see how I developed the association, now deeply engrained in me, that smashing every training session while remaining lean yields results.

It’s an alluring yet all too common trap. People warned me to be careful but even they struggled to argue with the gains I was making through my training. And I did appear completely healthy.

I wasn’t one of these obviously underweight athletes with protruding bones and uncomfortably picky eating habits. I wasn’t getting injured. Until on my second UKA altitude training camp in 2013, this time to Font Romeu, I began to wobble off the tightrope.

My right outer quad just above my knee was causing some pain, but once I got going (or had pushed through the pain barrier that told me something wasn’t right), I could run on it, so carried on. As it transpired, this ‘bit of wear and tear’ was a stress fracture of the femur. I strictly adhered to the rehab plan I was given but I was plagued with injuries from then on.

I got back to near my best and finished second in the BUCS indoor 3000m, ninth at the BUCS cross country and had been selected to run for the North of England in Antrim. But I was diagnosed with a stress fracture in my left shin in March 2015 and then again the following August.

By now, you’d think I’d be familiar enough with the signs and symptoms of stress fractures. Clearly not, as there I was, reunited with the boot. Perhaps there was a degree of misfortune involved but I put this sequence of events primarily down to a combination of poor choices I naively made in my early athletics career.

I’d love to be able to say my story is unique – but it’s not true. Female athlete triad issues affect so many young athletes, damaging or even ending promising careers. It is great to see that athletes like Lauren Fleshman and Tina Muir are sharing their stories as it is the only way we can prevent future falls from the same tightrope.

It is essential that such issues don’t remain taboo. We need to discuss them and challenge some of the dangerous ideas that are readily accepted within our sport so that future generations of athletes can be prevented from falling into the same traps.

An unhealthy relationship with food as a youngster: I was not, am not and never was anorexic or bulimic. But I did restrict my eating during what should have been a critical period of development between the ages of 13 and 16 because I reasoned that all that comes with development (hips, boobs etc) would only slow me down (ironically this was before I had started running).

I avoided any high fat foods and made sure I was never completely full. The choices I made should not be accepted as normal amongst athletes: they should be actively challenged. Dietary choices don’t need to be symptomatic of a full-blown eating disorder for them to have serious consequences later down the line.

Lack of periods: Most GPs do not have specialist training to deal with issues relating to the female athlete triad, especially when their patient is seemingly otherwise healthy.

I chose, albeit under the guidance of a professional, to accept that a lack of periods was normal given my training. Far too many athletes do the same.

Bone health: People assume that stress fractures are almost expected side effects of a sport which places a great deal of repetitive stress on the bones or that they only happen to people who are too skinny.

But stress fractures can also be prevented if bones are adequately supported. I urge all young athletes, particularly those who are amenorrheic, to push for a DEXA scan as soon as possible.

Overtraining: I got sucked into the overtraining cycle. Initially it did bring gratification in that I improved very quickly, but it evidently was not sustainable. Please try to see the bigger picture, to listen and act on the advice of those who care about you.