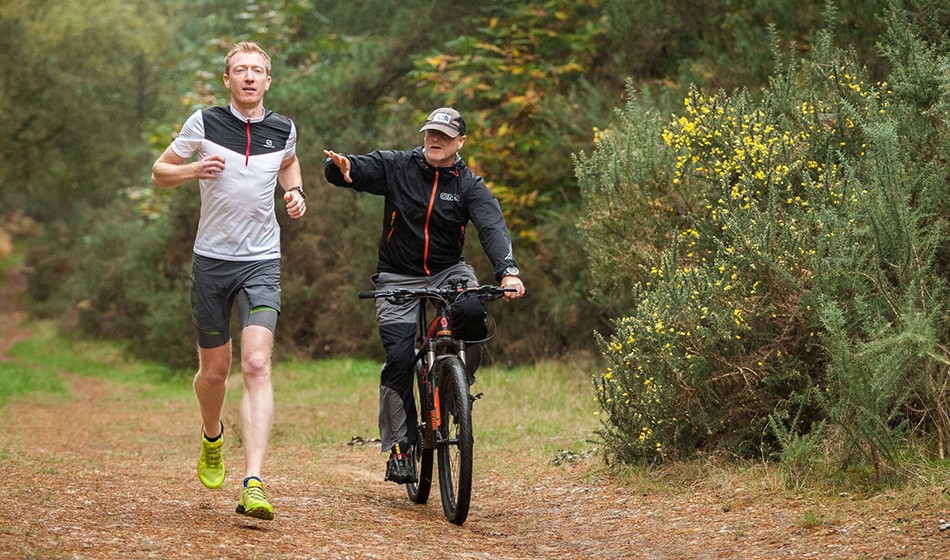 Movement specialist and coach Shane Benzie believes the western world has cultivated a way of moving which is more of a hindrance than a help. Here, he outlines how to use the body’s ‘sea of tension’ to bring about big improvements

Have you ever heard of fascia? No, we’re not talking about part of the exterior of a building, the cover for your mobile phone or the dashboard of your car. This kind of fascia is the thin layer of fibrous tissue which wraps around your muscles and organs, providing connections throughout the body and creating what movement specialist and coach Shane Benzie calls ‘a sea of tension’ which stretches from head to toe.

That force can be put to extremely good use, particularly if you are someone who likes to move their body regularly – a runner, for example.

Yet Benzie insists that few of us in the western world are actually using this remarkable human resource properly and that, if we learned how to access it fully, it would transform the nature of our movement and our running.

An increasing number of top athletes – such as ultra-runners Tom Evans and Damian Hall – have collaborated with him and continue to work on their movement – with impressive results.

Benzie believes the difference between how we think we move and how we actually move can be stark and it’s not until we change our perceptions that we will be able to start making significant gains.

“I wonder if we have the right view of our bodies,” says the man who travels the world working with every standard of runner from beginner to elite, as well as indigenous tribespeople. “The biggest thing I’ve found on my travels is this whole elastic, fascial sea of tension within the body, which I really saw when I first started going to Africa.

“Every time you see the human skeleton, you tend to see it in an upright position, supporting itself, and we grow up with that vision. We have a perception of being mechanical, therefore we move in a mechanical way.

“The way I see the skeleton, however, is 206 individual bones that are essentially floating in a sea of elasticity in our fascial system. We have ligaments, tendons, and then there’s fascia and myofascia coating everything, so your skeleton isn’t this clunky structure that moves like a set of levers, it’s actually 206 free flowing bones where every single bone sits in its own elastic trampoline.

He adds: “I use a children’s toy to try and explain this. It’s a series of wooden dowels suspended in pieces of elastic – pull it tall and it gets very twangy.

“Now, if we can get our heads around the fact that that’s the case, it inspires us to get height into our body, it inspires us to start moving in an elegant way where we would put elastic tension in this elastic system that we’ve got.

“The tribes and indigenous people are fascinating because they haven’t been subjected to biomechanics. They don’t have any preconceived ideas of how humans move – they just move and it’s invariably better.”

Here, Benzie explains why it would be a good idea to create a little more tension in your life:

We all assume we’re moving well so being able to see yourself is incredibly important.

Buddy up and film each other running. If you can’t find someone else who runs then just get a friend or family member to use your phone, iPad, whatever and then you run past it, run towards it and run away from it and just see yourself move.

That’s the first big task because you can’t hope to change something until you know what you’re doing.

When you walk, you essentially land with a relatively straight leg and on a heel – it’s almost like a pendulum system.

If I look at runners in the western world, the biggest pattern forming is that we are essentially running with a walking gait. The difference between walking and running is that, when you walk, you always have one foot on the ground but when you run you get ‘air’ and get both feet off the ground at the same time.

When we run, we are getting both feet off the ground but we’re doing that with a walking gait and we’ve become a bit lethargic.

Our cadence (the rate of leg turnover) has become slower and we’re landing on a heel with a pretty straight leg. That means that the impact we take isn’t dissipated well from the ground, the trajectory is wrong so it comes back to hit us rather than turning into elastic energy and throwing us forward.

One of the big urban myths of running is that everyone is scared of impact because we blame it for injuries, but impact is absolutely fundamental for human propulsion.

Your interaction with the ground is what creates the elastic energy and throws you forward but we are running around trying to suck ourselves down to the ground so that we don’t really create any impact.

Staying low to the ground means we have no alternative but to run with a walking gait because there’s no room for the legs to turn over underneath you.

If you take a bouncy ball and drop it on grass, it kind of just plops and doesn’t really do anything. Drop it on concrete, it bounces back into your hand. It’s Newton’s third law (for every action there’s an equal and opposite reaction) and shows us that the better something hits the ground and the more it gives back, the more it bounces. We are very bouncy and elastic but I just don’t think that we think we are.

Get the foot landing well and it creates a huge amount of stability for you. The dome of the foot dissipates the impact before it hits the first major joints, starts to turn it into elastic energy and the plantar fascia becomes elastic, does a really good job for you and loads as well.

If you treat your foot landing as a skill, rather than just something you will do 10,000 times during a run, it does get a lot better.

Note: Benzie advocates what he calls a ‘tripod landing’ which fully utilises the stabilising effects of the dome created by the arches of the foot. That means landing on a full foot, rather than just the heel or the forefoot.

RUN WITH YOUR ARMS

One of the big things we get wrong with running is the arms. When we run our arms and legs are inextricably linked – what our right arm does, our left leg does and vice versa.

Because we have dextrous hands, our arms are incredibly dominant over our legs, and we need to get the hang of the fact that whatever we do with our arms our legs follow. There’s a really big argument to say we run with our arms.

If you get someone to sprint or run up a hill they will use their arms but, just get them to run around and they’ll almost just bring the arms with them because they can’t leave them at home!

Because we assume we just run with our legs then we don’t want to put any energy into our arms so we let them just flap about but, by doing that, all we’re doing is actually confusing the hell out of our legs and turning our arms into long, dangly things which are actually quite difficult to stabilise.

For runners, if they can think about that connection between the arms and legs then they can really start to feel that their body is one continuous, elastic, connected, fluid thing.

KEEP YOUR EYE ON THE HORIZON

Head position is incredibly important. The human head weighs 12lb but for every inch it comes forward it weighs another 10lb so many of us, if we’re looking at the ground when we run, are effectively running with a 42lb head. The eyeline should be on the horizon.

These lines of elasticity that I talk about and the connective tissues run continuously from the toes right up into the skull. If the head is up, then you are putting those final millimetres of tension into that elastic system.

THINK OF RUNNING AS A SKILL

I think in general people would think about running as putting on a pair of trainers and trying hard. It’s a sort of blood and guts thing – ‘I’m going to nail it, I’m going to get it done’.

If you are an athlete or you’re trying to run a PB, sometimes you do have to go to that dark place and tough it out, plus you certainly need a good engine when you’re running.

By running we are building a better engine and improving cardiovascular ability but what I’d also like people to do is to think of moving beautifully whilst they are creating a better engine, which means breaking down the body and better enabling it to do that task.

If we started to think about it like that then it makes more sense and you do create a lot of free, elastic energy if you move in the right way. You also create a lot of gravity in your favour.

Anything with gravity or elastic in it means it’s for free. Your elastic system doesn’t want any oxygen, it doesn’t produce any lactic acid and nor does gravity so if you can continue running and building a good engine, but moving in a way which develops a body that’s good at it, not only do you get a better engine but you put less of a toll on it.

You’re a lot less likely to get injured as well, if you’re loading the body better.

He’s as good as I’ve seen. He has this amazing interaction with the ground, creates huge amounts of elastic energy, has this beautiful, elegant posture which loads elastic recoil and does amazing stuff with his arms, while his head position is beautiful.

» Shane Benzie is a running technique coach and movement specialist. He has travelled extensively to work with, live with and study a wide range of athletes in different environments. He has collaborated with athletes including Nicky Spinks, Mimi Anderson, Robbie Britton, Elisabet Barnes, Damian Hall, Mohammad Ahansal and Tom Evans

» The Lost Art of Running: A Journey to Rediscover the Forgotten Essence of Human Movement by Shane Benzie and Tim Major (Bloomsbury, £12.99) is available to buy in paperback, audiobook or ebook now