Out and back running sessions 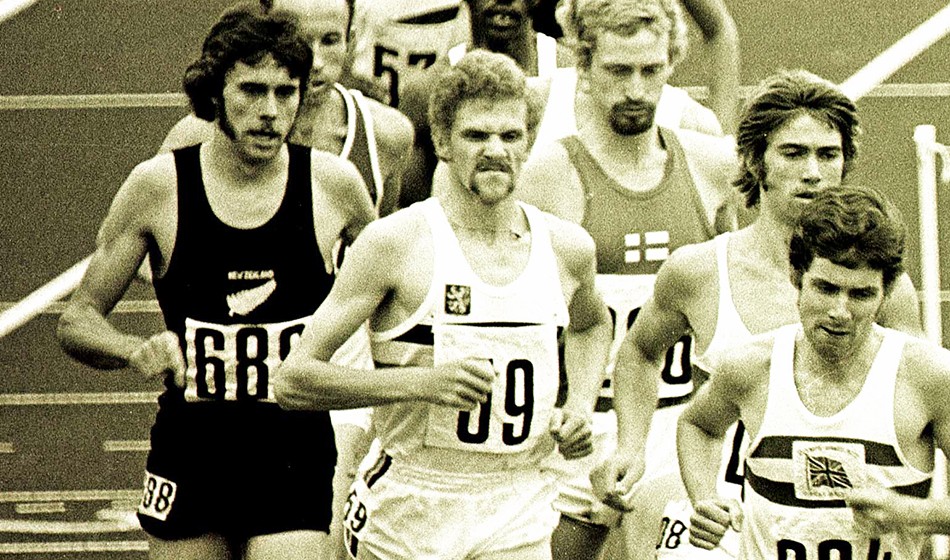 Sat in the stands to support an athlete from his own club, whom he would go on to work with and whose sister, Mary, he would guide to a Commonwealth Games gold medal six years later, is Birchfield Harriers coach and team manager, Geoff James. In seeing Ian Stewart take the bronze medal behind the great Lasse Viren in the 5000m, James’ memory of that sunny Munich day is as vivid as ever almost half a century later.

As the crowd settle into their seats for the blue riband 1500m, 10 men are spread across the start line by the green-blazered officials. James’ attention is drawn to the imposing 6ft 1inch figure, in the all black of New Zealand, who takes his place on the outside.

Seconds later the gun goes and Britain’s Brendan Foster takes the lead, pulling the field through the opening 400m in a steady 61.3 (pictured). After 650m the pace has slowed further and dramatically the white-vested Kip Keino surges from eighth into the lead. In proverbially ruffling the feathers of the pack who have been clipping each other’s heels to this point, the tall New Zealander is baulked but retains his composure in following the Kenyan to the head of the field as they pass 800m in 2:03.1.

The pace is being wound up to the point where athletes are inevitably in single file, with Keino leading from the Finn Pekka Vasala and then Foster, who is half a stride ahead of the New Zealander wearing 688 on his vest, as they take the bell. The threat of early leader Foster begins to fade on the last lap and with 60 metres to go, there is an act of symmetry as Vasala overtakes long-time leader Keino at the very same moment that our New Zealander overtakes the second great Kenyan in the field, Mike Boit.

The blond and bearded Finn takes the gold ahead of Keino, with Rod Dixon taking the bronze medal (3:37.5) and a spot on the Olympic podium, which will signal tears of joy.

Eleven years later, Dixon’s place in athletics immortality will be sealed by the nature of his 1983 New York City Marathon win, in a nail-biting thriller in which he pipped Britain’s Geoff Smith. You may not have even been born then, but you will have seen the iconic image of the white vested man wearing number 19 as he kneels in celebration oblivious to the wet tarmac of Central Park, eyes closed, arms outstretched and with palms facing heaven. It’s one of the most iconic images in our sport which depicts the fundamentally spiritual journey of running 26.2 miles and the orgasmic nature of post-race relief for the victor and agony for the ‘loser’.

Now 69 years old, Dixon joins us to discuss one key facet of his training over the years – namely out and back runs. It’s a session that has particular relevance during the current pandemic, not least because government are rightly encouraging us not to stray too far from our doorsteps to exercise.

The ethos of the out and back is simple. You run out for a specific time, turn around and run back to where you started. Your run needs to be traffic-free which is why a canal path or trail would be ideal.

During the current pandemic, be careful to respect government guidelines in exercising near to home and keeping your social distancing and this of course applies while you are running.

Dixon, who was ranked No.1 in the world over 5000m in 1975, recalls: “The out and back was loved and it was a challenge to balance training and recovery together with focus and ‘learn by doing’.”

While coached by his older brother John, Rod Dixon was heavily influenced by the legendary Arthur Lydiard and now has a pivotal role with the Lydiard Foundation. Lydiard himself has explained: “So first, you have to find your own basic capability. The best way to do this is to run an out and back course, for say 30 minutes.

“Run out for 15 minutes at a steady pace, then turn and run back again, trying to maintain that pace and not trying to force yourself. If it takes you 20 minutes to get back, it shows you’ve run the outward leg too fast for your condition. If you’re back inside 15 minutes without apparently increasing your effort, you haven’t run fast enough to begin with.” (Taken from The Lydiard Way, 1978).

Here Lydiard was using the out and back to teach his athletes pace judgement at their ‘best aerobic effort’.  Today we would say this is a 30 minute sub-threshold run. Lydiard has also said: “We call the limit the maximum steady state; the level at which you are working to the limit of your ability to breathe in, transport and use oxygen.”

If you want to use it in this way, warm up and then run an out and back course of similar difficulty both ways, preferable a flat route. An experienced athlete, with good pace judgement, running comfortably at their sub-threshold pace, should be able to complete the return journey within 30 seconds either side of the 30 minutes.

As your training progresses and condition improves, you should be able to cover more distance in the 30 minutes, with the same level of effort. So in essence it’s a good mode of benchmarking your training.

The two-time world cross country bronze medallist explains: “During my training and preparation the ‘out and back’ was an important segment/component after the foundation/aerobic training.

Dixon is an advocate of abandoning a fixation on the stopwatch for these sessions, adding that it was “a learning experience for pace judgement and about developing instinct”.

Evidence suggests that following Lydiard’s method, out and back runs would be practiced at least once every three weeks. This is dependent on the point you are at within your periodisation cycle and allows you the opportunity to engage in other modes of training which will be functional for your development, such as hill work for strength endurance and repetition work for speed endurance or fartlek, which of course works all three energy systems.

While the out and back has been traditionally associated with even-paced running, you need to think about progressing your work because athletes that train the same, tend to stay the same. Consider both (a) negative split sessions and (b) progression runs.

In terms of negative split sessions, some of Dixon’s own progressions included the following:

The three progressions above get harder to effect so are a way of progressively overloading the system over several months or years.

Additionally, another way of effecting a negative split session less in terms of a binary and more incrementally is through progression runs. This means that you increase your pace throughout your workout until you are running beyond your maximal steady state at the end.

Typically Dixon would start out at 1/4 effort then up his pace to 1/2 effort. At halfway he would turn and begin to come back at 3/4 effort with his final half mile at 7/8 effort.

While the out and back run traditionally involves a strong aerobic energy system component, it can be adapted to work both the alactic and lactate energy systems. This may be especially useful during the pandemic when tracks are out of bounds.

Short out and backs of less than 40 metres long could be used for a sparkly 10-second effort with a jog recovery of a couple of minutes, which will use the alactic (stop-start) system.

A hard out and back with a return journey of between a minute and three minutes would definitely be training the lactate (linking) system.

As well as progressing one’s training, the out and back run can be regressed to allow for steady state aerobic running. Remember that if you overload your training without allowing for recovery, training adaptations cannot take place.

It’s something which children can undertake if kept light and aerobic, with distances being regressed in comparison to more biologically mature athletes. This is something close to Dixon’s heart as his KiDSMARATHON programme is an 8-10 week ‘In School’ running and nutrition educational initiative that enables the youngsters to complete a full marathon (26.2 miles) by running approximately 3 miles per week. It makes an invaluable contribution to social justice by focusing on those in inner cities and other marginalised communities.

These days Dixon will have regressed his own training compared to the 1970s but even when at his peak, he recalls: “Sometimes the easy training day was an out and back as a recovery or simple ‘no thinking’ run. Nice and easy, ‘out and back’.”

Post the pandemic, when travel restrictions are not imposed and track and field venues are back in use, consider the ways in which the out and back can be adapted. If you are a fell runner, running in the mountains, remember the rule is two minutes up for every one minute down!

When effecting an out and back on road or perhaps down a nearby canal during the pandemic, it’s very important to listen to your body and to take precautions. Dixon himself stresses: “Very important for me was to go out and back on the one side of the road or pathway. Out on the left back on the right. This gave my body a sense of balance. That way I figured my left leg and right leg would be subjected to equal pressure or stress if there is was a camber or slight slope.”

As well as the physiological benefits which have been outlined, during this period of lockdown, when our mental health is being tested, the psychological aspect of our running becomes more important than ever. Out and back runs are great in that the view is surprisingly different on the way back and there is much less chance of getting lost!

Dixon signs off with a touch of good humour by noting: “I remember a course my brother set for me was ‘lucky’ as a girlfriend I knew lived on the course and I would get to see her ‘out and back’. Magic if I had to do 3 x out and back!”

» Donations can be made to Rod Dixon’s Kids Marathon through kidsmarathonfoundation.org