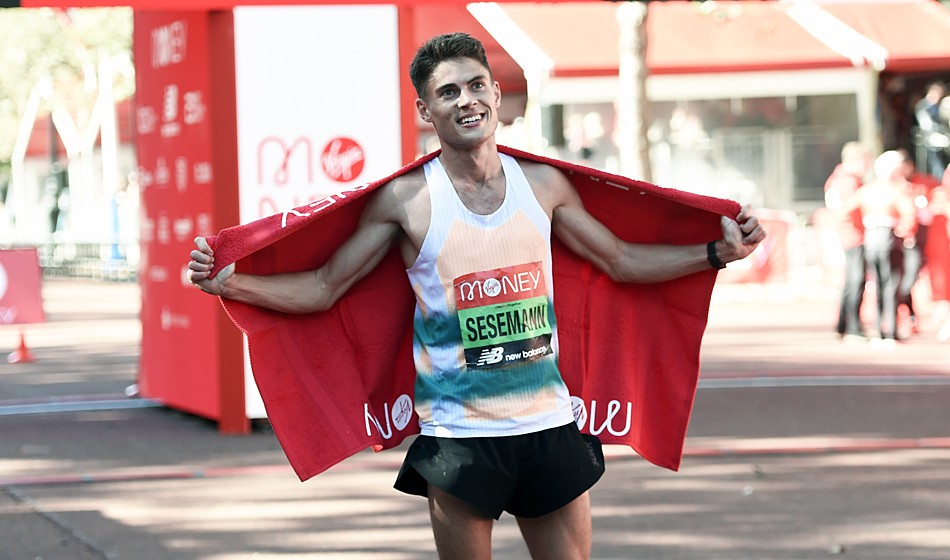 First British man home in Sunday’s marathon says thanks to his No.1 running companion

Phil Sesemann is spoiled for choice when it comes to training partners at his base in Leeds. Among many others there is 27:53 10,000m man Emile Cairess for starters.

His best running partner, though, is his dog called Kipchoge – a three-year-old Spaniel and Vizsla cross.

Kipchoge sometimes runs up to 100 miles a week and Sesemann has another younger four-legged friend who is starting to do some of the miles with him too – a German Shorthaired Pointer called Haile.

“Emile is a good runner but Kipchoge is always there,” says Sesemann with a smile when asked to pick his favourite training partner.

On a more serious note, moving from London to Leeds for medical studies a decade ago paid off for him in style on Sunday as he finished seventh place overall in 2:12:58 – inside the qualifying standard for next year’s Commonwealth Games and European Championships – and on his 29th birthday to boot.

He is coached by Andrew Henderson in the northern city and benefits from the new Leeds hub support set-up there. A junior doctor, he has understanding colleagues too who have let him work part-time while he pursues his dream to be an elite runner.

“I’m really lucky because since I qualified four years ago I’ve been part-time,” he explains. “My colleagues have said ‘this is your shot, so give it a go and the medical career can wait’. At the moment this is what I enjoy and I find having a bit of a balance works too.”

On the race itself on Sunday, he said: “I just tried to soak up the atmosphere early on and then from 10 to 13 miles I began to feel really good. The groups came back together and then began to split and I found myself at the front as they split. So I just tried to use the pacemakers and then as a few guys dropped back I thought I might as well take a swing at things and see what happens.

“I can’t complain. 10/10 for the day. It’s a marathon debut and maybe I’d have liked to run a little bit quicker but I did finish seventh at the London Marathon!”@philsesemann on finishing seventh in the men’s elite race at @LondonMarathon. #LondonMarathon pic.twitter.com/NHhsb5z8G0

“Unfortunately when the pacemakers dropped out I went into the headwind and the last six miles felt like a little bit of a death march. It was a case of taking one mile at a time and drawing on all the training I’d been doing and the support of my family and friends who were out there.”

Sesemann was paced by Jake Smith for much of the distance. They know each other well as they trained together during August this year. “I knew he would do a great job,” says Sesemann.

Overall, he added: “I can’t complain. Ten out of ten. It’s a marathon debut. Maybe I’d like to have run a bit quicker but I could come back here next year and run 2:09 and be the third Brit and finish 12th overall so I can’t complain at being seventh in the London Marathon and being first Brit.”

A keen club runner who used to race for Blackheath and Bromley in his youth before joining Leeds City, he continued: “I just have to recover now ready for the national six-stage road relay next weekend in Sutton Park. Aldershot have a strong team and my club Leeds City have a title to defend.”

Aldershot will be hoping Leeds don’t stick Kipchoge in their team.