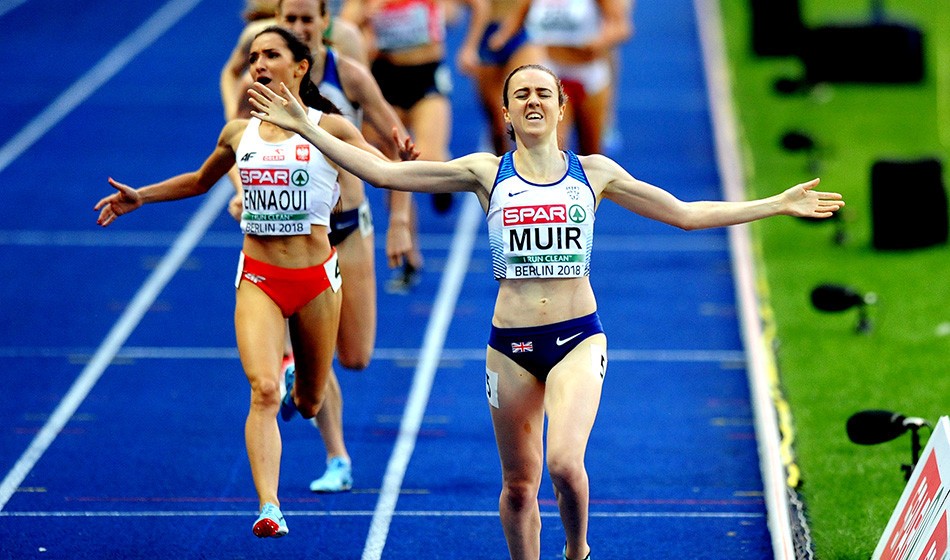 It’s a bit surreal, really. This year has gone so quickly.

It was very hard. I look back on it now and think ‘how did I manage to do all of that?!’ I didn’t really know how things were going to go because my veterinary degree placement was so tough and demanding. I was trying to fit in the training and not knowing how well I’d be able to train and race at the big championships, feeling a bit tired.

Coming away from the season, having achieved everything I wanted to achieve and more – I’m really proud of myself.

Kicking things off with a Scottish 800m record

I had run a 3000m (8:37.21 to win the Scottish title in Glasgow) and I was reasonably happy with it but kind of wanted a bit extra. When I did the 800m (at the Emirates Arena) I thought I could hopefully get close to two minutes but to do sub-two (1:59.69) indoors was quite special and not very many people do that.

That gave me a bit of a confidence boost when I was in the middle of placement and not sure how things were going. I think that really helped me going into World Indoors, knowing I could at least do a sub-two 800m.

It was just a small competition – we had a little crowd there with friends and family. It was nice to deliver a world-class performance – I ran it gun-to-tape by myself in front of a little crowd. It showed me it doesn’t have to be a major championships to bring out a really good performance. I was glad I could do that for spectators at home.

The only thing that is really limiting you is yourself. If you work hard and you train hard there’s no reason why you can’t give an amazing performance at a league race, for example – you can go out there and do it. Obviously it’s much easier when you have pacemakers and things and it’s a bigger stage, but you can do it. You’ve just got to take the opportunity.

I think I was so busy with my veterinary placement and then getting to the event (in Birmingham in heavy snow) that it kept me really distracted. I did not have time to think about the competition at all. It was only afterwards that I thought ‘oh, that was a world indoor championships, that’s quite a big deal!’ I think that was good in a sense because it meant that I didn’t really have any time to get worried or nervous about it – I just rocked up, raced and it went really well (1500m silver and 3000m bronze).

I was really pleased with how I executed the races.

When did I know I had it (the gold)? When I crossed the line. I knew there were big kickers in the race so I couldn’t leave it. I needed to make it a hard, fast race. I didn’t actually realise what the time was until I saw it engraved in the medal at 4:02. ‘No wonder that hurt’, I thought. It was pretty fast!

I knew there were good girls behind me. Although I knew I was the favourite, 1500m is hard to judge and it can go many different ways and I was very respectful to the other girls, I knew how good they were.

I think before I had been one of the ones with potential to medal but this was the first time I was the favourite. I knew that going in – I knew there was pressure but I knew from past experience of championships that I race best when I am relaxed and I don’t get stressed about it, just to go in and enjoy it. The pressure is there because people are expecting you to do well and they are supporting you. I just saw it like that – as a positive rather than a negative.

Diamond League victory – the icing on the cake

We didn’t have a world or Olympics so the Diamond League was sort of the equivalent of that world final. To go out there and win against the girls who were running very well and execute the race – I think this year I have shown the ability is there but I can also execute races in terms of tactics. It’s another building block in getting all the bits and bobs together for the big championships next year.

It went off at a good pace. I knew before that the Ethiopians like to go out a bit hard so I thought ‘no, I need to go at my own pace that suits me’. So me and Sifan (Hassan) did that, went through at a good pace, caught up with the other girl and then I remember it was slowing down a lot and I knew Shelby (Houlihan) had a really good kick so I thought ‘I cannot leave this to 100m or 200m to go’. When me and Sifan caught up with (Gudaf) Tsegay at the front, I thought ‘I’ve got to go now’.

I kicked and kicked again. When Shelby came I was able to respond and keep going.

I think I’d have to say the highlight was graduating and then probably winning the European final because that was my first medal outdoors.

Winning the Diamond League was fantastic but I think getting that (European) medal and standing on top of the rostrum was something a little bit different.

» Laura Muir will be returning to the Müller Indoor Grand Prix Birmingham on February 16. Tickets are on sale now via www.britishathletics.org.uk