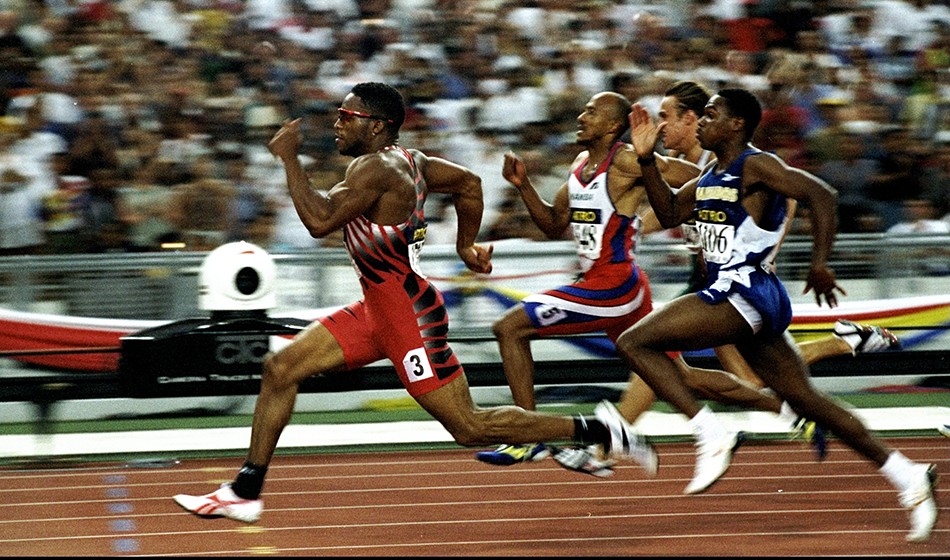 You ask the questions, the athletics star provides the answers. Here we speak with a former world and Commonwealth sprint champion who is still a close observer of athletics as a broadcaster

What changes in training and technology have you seen over the years with respect to biomechanics, nutrition and recovery science?

Let’s start on the recovery. I can tell you that a lot of the things that we did in the industry have changed. I am of a generation when it was not uncommon maybe to see you up to the neck in a big trash bin full of ice water. That was supposed to bring your legs back and then someone did a study which said it actually may do more harm than good. The study showed that when your body is that beat up from practice you are actually better off with heat than ice.

In technology we have to talk about the shoes. I’m not one of those, though, who believes you can draw a direct line between the new shoe technology and all the fast times. Not everyone is in the new shoes and Karsten Warholm comes to mind. The other thing is the tracks. I don’t think that the track that I ran on in Atlanta to the one at the Tokyo Olympics is the same. I think you can say that the one in Japan gave more bounce back.

Lastly, when it comes to nutrition we’re all evolving, not just in athletics. I think we know so much more now about the body and how to help it to recover and get the optimum performance out of it. I look at somebody like Tom Brady, who’s a quarterback for the Tampa Bay Buccaneers, and he’s in his 40s and still performing at the highest level. How’s this possible? It’s possible in 2022.

What moment of your career would you want to relive?

Maybe the Commonwealth Games win in Kuala Lumpur in 1998. By some miracle that Commonwealth 100m record (9.88) still exists and I have no idea how! Quite frankly, I think the moment that I’d want to relive is the one which is near and dear to my heart and that is Trinidad and Tobago’s very first medal in the 4x100m at any level. It came at the 2001 World Championships in Edmonton and we won silver.

I was the captain, the second leg and the coach and that was a very rewarding feeling. I helped take a then 16-year-old Darrel Brown and a then 17-year-old Marc Burns to a silver medal. We did it exactly how I thought we would, where everyone else would drop the baton and we would not. That was good enough for silver behind South Africa.

Why don’t you have your own eyewear line?

I don’t know! It’s so funny that’s the thing [wearing glasses] 20-odd years down the line which people remember me for. I remember in Sydney thinking that Oakley were paying me to wear the glasses for what was 10 seconds of an anchor leg in the semi-final. If you Google my name it’s still one of the first images that pops up, though, so a lesson to young athletes is don’t think you’re getting one over these corporations because they’re playing the long game! They only made 20 of those glasses and they sold out in minutes. My career was so synonymous with those glasses and I was wearing them long before I actually got paid to wear them. It worked out and that’s part of my image and legacy.

What was your reaction the first time you saw Usain Bolt?

The first time I saw him was actually a long way before the rest of the world was paying attention. He was at the Caribbean Games in 2004 and he set the world U20 200m record, clocking 19.93. It lasted all the way until last year. He had his chain tucked into his mouth and he took the last 100m off. He was looking at girls in the stand and could’ve waved to the crowd he was so far in front. He ran 19.93. Imagine a junior doing that? I’d never seen anybody that tall move their legs that quickly. Of course, he went to the Athens Olympics later on that year and didn’t get through the first round.

Then in 2005 he re-emerges and he’s on the pro circuit. Two years later in 2007 he gets the world 200m silver medal behind Tyson Gay and he arrives. Everyone knows what then happened in Beijing in 2008. I always thought Bolt could be special if somebody bridged that gap between his junior success and getting into the pros and his coach Glen Mills did that.

I think they’re both certainly capable. I don’t know if anybody else in the immediacy can do that but I’d give Elaine a better chance just because of her form. She is so much better at 200m than so many others. I also don’t think you can look at her 10.54 at Hayward Field last year, considering she was kind of fatigued after coming off three gold medals in Tokyo, and not think there’s another five hundredths of a second somewhere to tie the 10.49.

I would probably be surprised if 10.49 survives Elaine Thompson-Herah’s career. I don’t know how long Shelly-Ann has got left but I don’t think Tokyo was her last Olympics and I think she’ll go out after Paris in 2024. She has the talent as well. I mean, she ran 10.63 in April so anything is possible. I don’t think Sha’Carri Richardson can think about 10.49 until she fixes the first half of her race. We know how well she finishes but the first 30/40m have to be a lot more solid for her to get into this conversation.