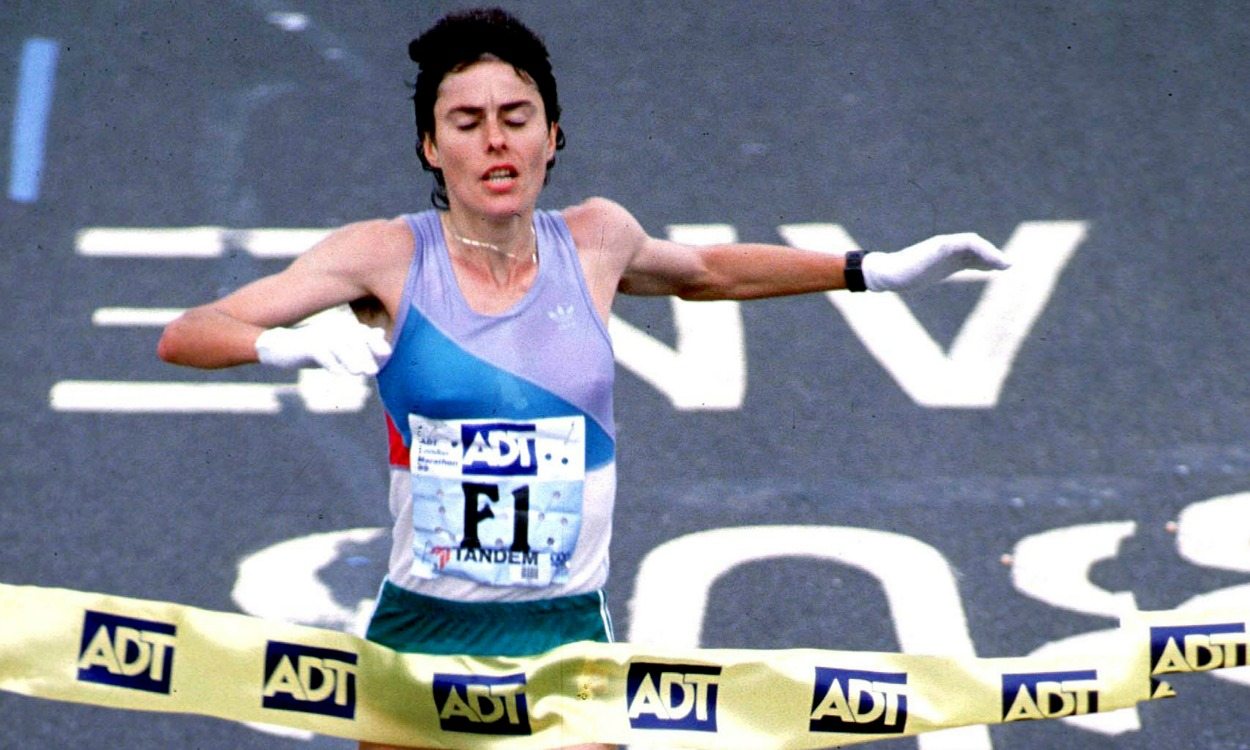 Twenty-seven years after winning the London Marathon in a UK record-breaking time, Véronique Marot will return to run 26.2 miles in the British capital city next weekend.

“It is a birthday present to myself for my 60th,” says Marot when asked, ‘why now?’ “It’s as good a reason as any!” she adds with a laugh.

The time of 2:25:56 that Marot ran in 1989 stood as the British marathon record for 13 years and still ranks her third on the UK all-time list behind Paula Radcliffe and Mara Yamauchi. Eleven years have passed since she last ran the London course, clocking 3:29:39 as a 49-year-old, and this time, on April 24, she again sets her sights on crossing The Mall finishing line in under four hours.

“We are aiming for 3:40 or so,” says Marot on the goal set by herself and her training partner, Helen Forshaw. “Anything around 3:45 we will be happy with.

“The ultimate aim is to break four hours,” adds the 60-year-old. “I’ve had a look at all the records – the British records, the world records – and they are just completely stupid, there is no way!”

“The ultimate aim is to break four hours. I’ve had a look at all the records – the British records, the world records – and they are just completely stupid, there is no way!”

Marot was born in Compiegne in northern France in 1955 and in 1976 moved to England to study at York University. In an interview with Athletics Weekly in 1985 she described her running background in France, highlighting that as a teenager she probably never ran more than 10 miles a week.

“I never realised at that time that if people were faster than me it was probably because they trained so much harder!” she said then. “I just thought I didn’t have much talent. Now I think whatever success I’ve enjoyed has been due to 33 1/3% talent, 33 1/3% hard work and 33 1/3% dedication and mental tuning.”

Marot started running again when she came to England to study history and she took on her first marathon, over a very hilly Barnsley course, in 1978, clocking 3:55:48 off a weekly mileage of around 15 miles. She ‘raced’ her first marathon two years later and clocked 3:07:40.

Her London Marathon career began at the very first edition in 1981 when she ran 2:46:51 for ninth place off around 40 miles a week. She went on to win the London event eight years later before she represented Great Britain at the Olympic Games in 1992. She broke the British record for the first time with 2:28:04 in 1985.

“There’s like a four-minute per mile slow down!” Marot says with a laugh as she compares her training as a British international with her current regime.

“Helen has got a Garmin because we decided that we did not want to kid ourselves. She hasn’t got it in order to see how well we are doing but in order to make sure we are getting the mileage right.”

With no Garmins in her heyday, she adds: “My coach and the father of my children, Brian Scobie, did go around with a calibrated bicycle to measure some of the runs but apart from that we pretty much ran the established runs and the distances were approximate, it was the effort that mattered.

“Then I was doing 90 miles a week with about nine to 10 runs per week, of which at least six were hard. Whereas this time, a 17 mile run took us 2 hours and 50 minutes so we were running at an average pace of around 10 minutes per mile. It’s a big difference from a long run of 20 miles in the olden days when I was doing six-minute mile pace!” 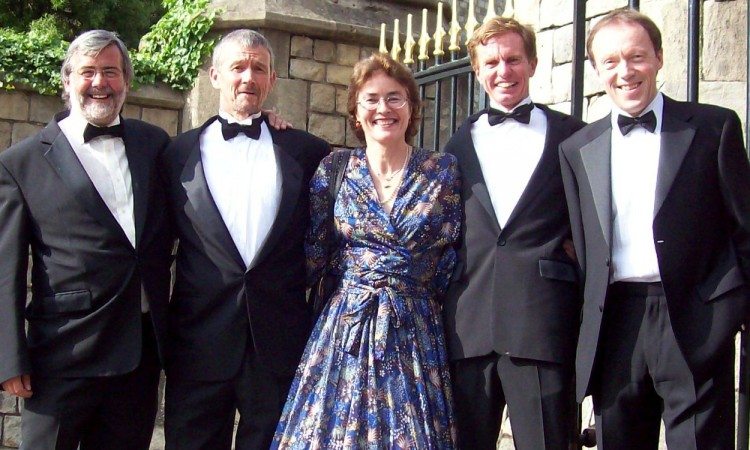 She also recalls a run in Colorado last summer that she did with Steve Jones (pictured above with Marot, Mike Gratton, Hugh Jones and Charlie Spedding in 2008), who still holds the British men’s marathon record with the 2:07:13 he clocked in 1985.

“You should have seen the two of us. We went out running with my son Quentin, up on the hills, we were running at 8000 feet,” she says. “We were both trying really hard. Quentin was ahead of us, neither of us would admit defeat until I said to Steve, ‘shall we walk for a bit?’

“There’s a former and the current British record-holder having to stop to walk, letting the 20-year-old go off on his own, because we were just so knackered. But we were still running hard.

“What I mean is, we still have the spirit. The spirit is strong but the body is weak!”

This brings us on to the topic of current marathoners and the progression of female long-distance running in Britain.

“I’m still ranked third-fastest in Britain. Mara Yamauchi, she has run 2:23, she has retired. Paula (Radcliffe) has retired. Where are the women of tomorrow?” says Marot. Radcliffe broke Marot’s British record with her world record-breaking run in 2002 before she improved that mark in 2003 and her 2:15:25 from London hasn’t been threatened by any athlete around the world, let alone a British runner, since.

Why does Marot, who in 1997 had predicted that Radcliffe would be the one to break her record, think this is?

“Because no one is training like Paula,” she says. “All Paula did, to my training and to Steve Jones’ training, is add all the things we were not doing in the 1980s. She added the physio treatment, she added the fitness – the weight training, the upper body training. She put in gym work, physio, massage, loads of recovery, cold baths and all that kind of thing.

“She applied a scientific approach to her recovery time. She didn’t run any differently from us. We thought going to the physio, going and getting a massage, was for weaklings – we would not do it unless we were injured. She just added all that in. If I had added that in I would definitely have run about 2:23/2:22. I wouldn’t have gone any faster. She got down to 2:15. Paula did it with more talent than me and with the scientific backing.”

On where the next crop of British marathon runners might come from, Marot looks to those making an impact in cross-country such as Kate Avery, Laura Muir and Gemma Steel.

“I think to look for the next women along I would look at cross-country because they tend to be the ones with the best endurance,” she explains. “That is exactly what Paula did. I wasn’t particularly good at cross-country but I still came from cross-country. Cross-country is very good because it shows women with strength.

“I don’t think there are enough of our up-and-coming runners who do enough cross-country running.”

During her own athletics career Marot qualified as a solicitor and went on to set up her own firm at the beginning of 1996. She had her two children in 1994 and 1998 and then went back to doing a bit of running, taking on the London Marathon in 1999.

At the same sort of time she became more involved with her club, Leeds City AC. Having been a member of the committee she became president in 1999 and that was a position she held until the end of 2010.

During the last three years of her presidency, Marot was also in charge of the women’s team for the national league and since then she has set up her own separate women’s running group.

“I got approached by the mother of a school friend of my daughter who wanted to run the marathon and then she brought a few of her friends along so I set up a group,” she says. “They all wanted to run sub-four hours, so that’s what we did.”

For all of her achievements, Marot does not seem to have received the level of recognition she deserves, but the record-breaker insists she is fine with that.

» History will be made on April 24 as a runner crosses the famous finish line at the end of the Virgin Money London Marathon to become the millionth finisher of the event. #oneinamillion