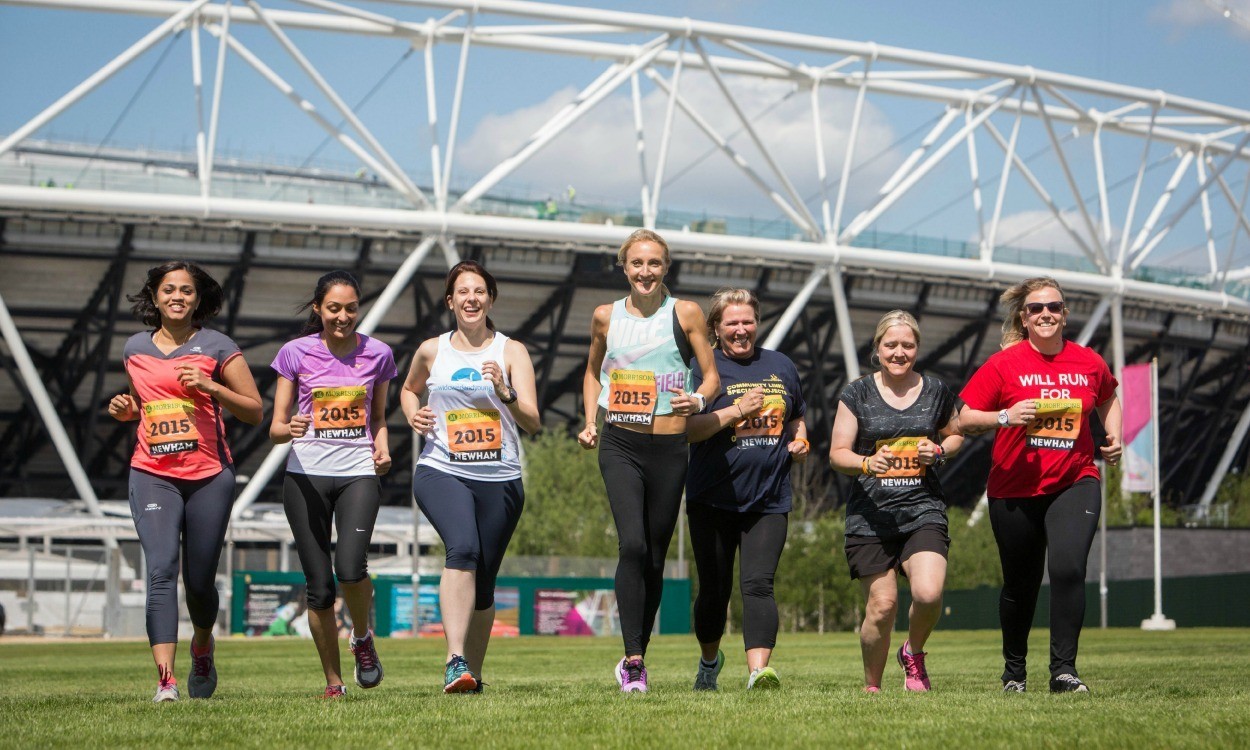 Paula Radcliffe’s campaign to get more women running continued on Wednesday as she met the six women selected as Radcliffe’s Great Runners ahead of the Morrisons Great Newham London Run on July 19.

The marathon world record-holder was announced as the Great Run series ambassador for women’s running earlier this year and, as was also the case for the recent Morrisons Great Manchester Run, a search began to find six women to become Radcliffe’s Great Runners for the London event.

Paula Blake, Pherenice Worsey-Buck, Donna White, Devkee Trivedi, Meera Sankaranarayanan and Vicki Read were the six successful applicants and are due to join Radcliffe on the start line at Queen Elizabeth Olympic Park in July, with Radcliffe herself intending to take on the 10km event and her children, Isla and Raphael, the 2km family run.

“I feel very much that running has given me a lot in my life and I’m not talking about my career, I’m taking about my self-confidence, my health, meeting new people, travelling all over; just a lot of experiences that I wouldn’t have had, had I not had running in my life,” said Radcliffe, who recently ended her competitive marathon running career in London.

“It’s being able to introduce that to as many people as possible.

“It’s a sport that’s so easy to do with your family, with kids, just to fit it in. You can do it anywhere and you can use it for whatever level you want – you find the level that works well for you.”

The 41-year-old, who also holds the world record for 10km on the road, added: “I worked with the six women for the Great Manchester Run and it was just seeing how they grew in confidence throughout it and how when they finished the run on Sunday they were just so overcome to have been able to have done that. They’ve made friends among each other because they’ve shared that bond and they’ve shared that journey. They’re already planning their next run.”

The six London women, who range from seasoned runners to complete novices, were picked as they all want to get active and inspire others to do the same and take part in the 10km event this summer.

“Running has given me so much pleasure and a lot of wonderful experiences and I want to share that with these six wonderful women and help them reach their own personal goals,” said Radcliffe.

“I hope that the six women we’ve picked will go on to inspire thousands of other women across the UK to take that first step, sign up for the Morrisons Great Newham London Run and find out for themselves just how amazing running can be.”

Each of Radcliffe’s Great Runners has their own story to tell and 24-year-old Devkee explained how the Morrisons Great Newham London Run has given her something to work towards after what has been an incredibly tough year. Devkee was knocked off her bike last year and her injuries prevented her from running, then in December she was hospitalised with viral meningitis and as a result she lost all hearing in her right ear.

“I’ve always enjoyed sport and running and I think that’s why it was so tough not being able to do anything for a year,” explained Devkee, who is currently a member of the BRAT Club in Birmingham but will be joining Edmonton Running Club when she moves back to London this summer.

Pherenice said: “I lost my husband to cancer in September 2013 and began running to cope with my grief. In celebration of my husband’s life, I am running 43 events to mark each year that he was alive, and to raise funds for WAY Widowed and Young, a charity that supports widows at a young age, as I was. I hope I can do him proud when I run in Queen Elizabeth Olympic Park.”

The 41-year-old, who ran her first event, a parkrun, last September, added: “I was so excited when I found out I had been picked as one of Radcliffe’s Great Runners. Today’s training session was invaluable and means I will be fully prepared and in perfect shape for Morrisons Great Newham London Run. I am certainly going to be applying all the tips we learnt from Paula today over the next two months.”

All runners in the Morrisons Great Newham London Run will get the chance to have their own Olympic moment as they finish inside the Stadium. The course will also take in the sights of Lee Valley VeloPark, the London Aquatics Centre and the Copper Box Arena.

Earlier this year event organisers unveiled their vision for the 10km run to become the UK’s biggest mass participation running event, with an aim of building to 60,000 participants within five years.

» The Morrisons Great Newham London Run takes place in the Queen Elizabeth Olympic Park on July 19, 2015. To enter and have the opportunity to run in the former Olympic Stadium, visit www.greatrun.org/great-newham-london-run