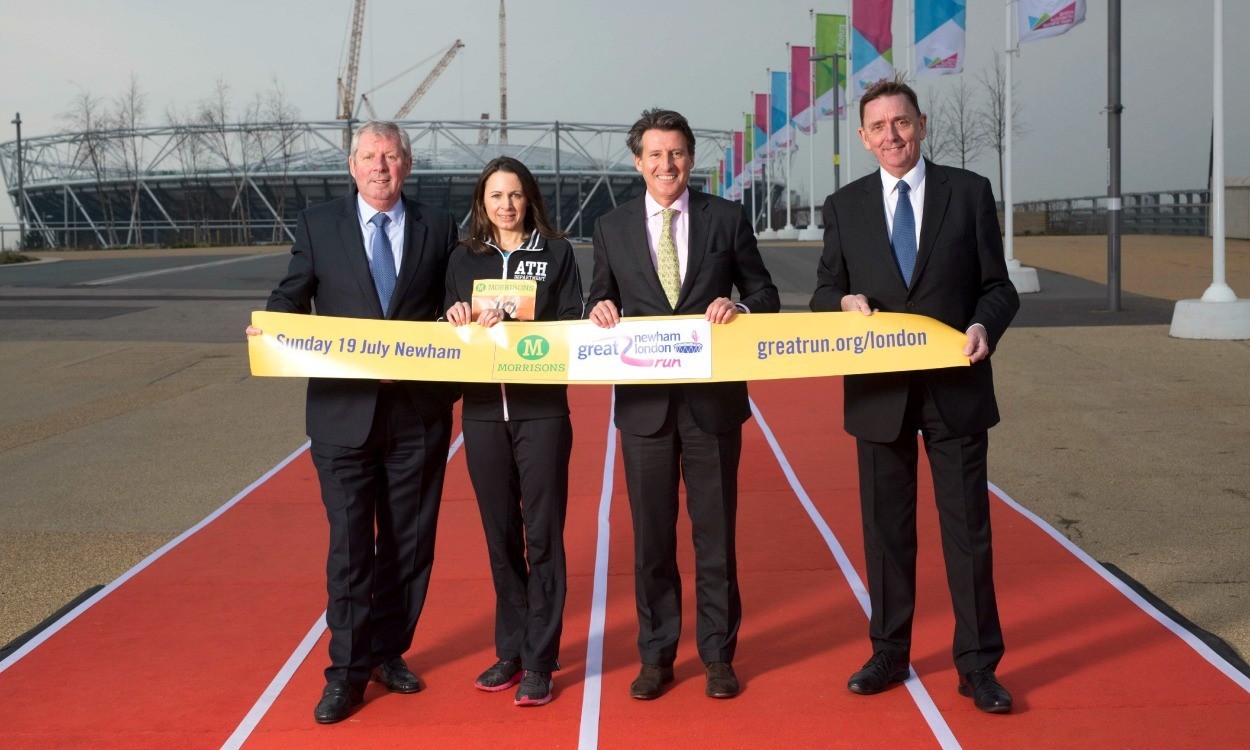 Having set a target of one million people taking part in their running events by 2020, Great Run organisers Nova International have today launched the Morrisons Great Newham London Run, with Great Run founder Brendan Foster unveiling a vision for it to become the UK’s biggest mass participation running event.

Foster was joined at the Queen Elizabeth Olympic Park by the Mayor of Newham, Sir Robin Wales, together with Sebastian Coe and Jo Pavey to launch this year’s Great Newham London Run, set to take place on July 19 as the first event in the former Olympic Stadium since redevelopment work began.

On the ambitious aims for the 10km event, Foster said: “We’re working in partnership with Newham to make the Morrisons Great Newham London Run the biggest running event in Britain. Our aim is to build to 60,000 people taking part every year within five years.”

In comparison, Nova’s Great North Run is currently the biggest annual running event in Britain with 57,000 participants. More than 220,000 people took part in the Nova International-organised series of events in 2014.

“It took us 30 years to reach 50,000 participants at the Great North Run” said Foster. “We are now aiming to create Britain’s biggest annual running event. It will be spectacular to see 60,000 people running around Queen Elizabeth Olympic Park and crossing the line in the stadium.”

He added: “It’s like in Field of Dreams, the Kevin Costner film – if you build it, they will come. At the end of the day, we have big events in Glasgow, Newcastle, Manchester, Birmingham and the Great South Run. We build the infrastructure. We don’t make the Great North Run the size it is, we make the Great North Run physically capable of taking lots of people and it’s the people who decide whether they want to make it into a big event.”

Former LOCOG chairman Coe, who is currently running for IAAF presidency, believes the event to be an exciting part of the London Olympic legacy.

“The Morrisons Great Newham London Run is a tremendous example of London 2012 legacy in action,” he said. “It is a unique opportunity for runners of all abilities to experience running in the former Olympic Stadium, which no other mass participation event offers.

“I hope many more people in London will be inspired to discover the magic and enjoyment of running by taking part in this event.”

Pavey, who is returning to the Great Manchester Run in May when she will target a hat-trick of victories, added: “I will never forget running in the former Olympic Stadium at London 2012, and now everyone has the chance to experience this at the Morrisons Great Newham London Run, which I think is fantastic.”

The stadium in the Queen Elizabeth Olympic Park is currently undergoing redevelopment work to turn it into the new national competition centre for British Athletics in 2016 as well as the permanent home of West Ham United Football Club.

As well as the 10km event set to take place there this year, the Morrisons Great Newham London Run is also due to include a 2km family run and a team relay event which will involve four 10.54km stages totalling the marathon distance.

Entry into the 10km event costs £32, with further details available at www.greatrun.org.