Keely Hodgkinson: “Going into that Olympic final, I refused not to be on the podium” 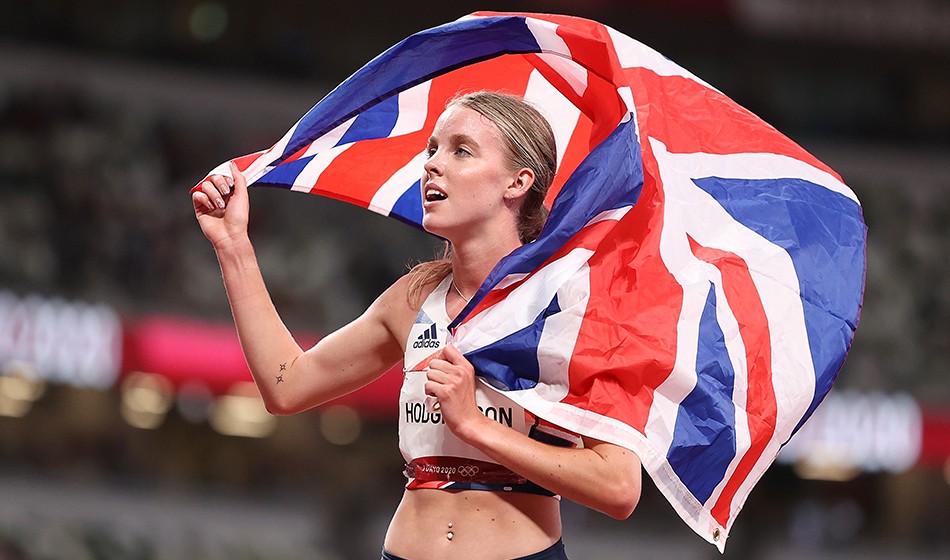 With the track and field season coming to a close, Hodgkinson reflects on a life-changing year, the highlight being the first British woman to win an Olympic 800m medal since Holmes in 2004.

Keely Hodgkinson has had a stunning 2021 🔥

“I wanted to take it round by round. You couldn’t think about finals on that stage as there were so many amazing and talented women who wanted to be in that final. I’d say I was most nervous for the heats as I didn’t want to go out then.

“The semi-finals were pretty cutthroat and there were a few surprises but once I was in the final I was pretty chilled. It was about executing the race well, which I think I did!”

The final itself was historic for British middle distance running on many levels. Not only did Hodgkinson break Holmes’ British record of 1:56.21 with 1:55.88 but three British women made an 800m final for the first time in history, with Jemma Reekie and Alex Bell – who selected in place of Laura Muir just three weeks before Tokyo – finishing fourth and seventh respectively. 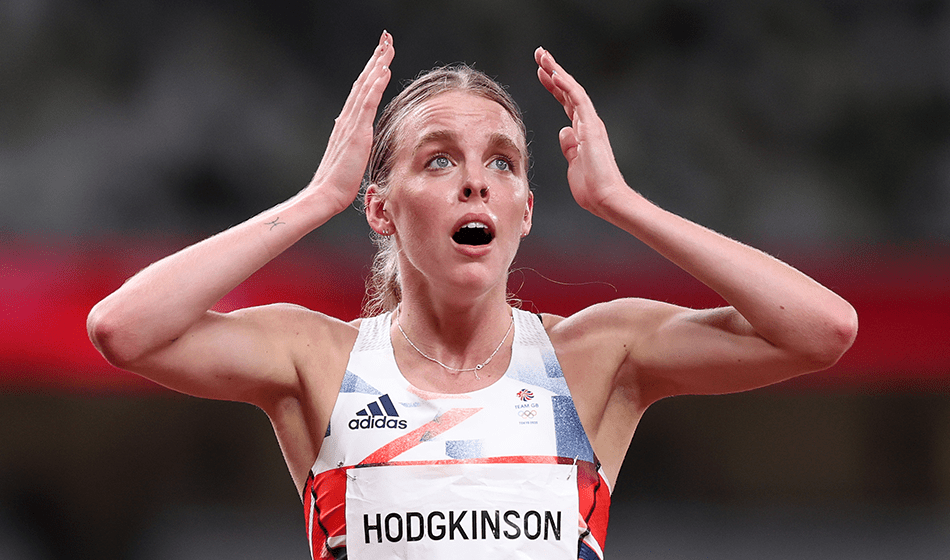 “Going into that final, I refused not to be on the podium,” the 19-year-old tells AW. “I went in with the mentality that I knew I could medal and it was just making sure my body was ready to perform on the day. I don’t think many people thought I’d win a medal, even though they thought I was capable of it. To have the three of us [in the final] showed that to make the British team you’ve got to be looking at finals and podiums.”

On breaking Holmes’ record, she adds: “Kelly spoke to all of us throughout the Games, like little words of wisdom here and there. She was telling us to relax and get the job done so it was so great that she was supporting all the GB girls.

“She actually seemed quite happy that her record had gone, that it was about time that it went. It’s quite an honour to take the record and we kept the same initials as we’re both KH.”

Hodgkinson finished second in the final behind fellow teen superstar, 19-year-old American Athing Mu, who didn’t lose a single 800m race throughout 2021. The two actually met for the first time at the Olympics but Hodgkinson believes that this will be the start of a “friendly rivalry”.

“I’d watched her performances throughout the year as she took my world indoor record off me,” the teenager says. “I haven’t really raced her enough, though, and when that happens next year everyone’s game will have to rise as you now have to run 1:55 to medal.

“She’s a really good athlete and it’s crazy that we’re the same age and were one-two on the podium. I suppose, with 100m to go, I was thinking ‘I have to chase her down’ but you can’t give her that. I had to be on her shoulder to do that so that’s something to work on as I’ll be racing her next year.” 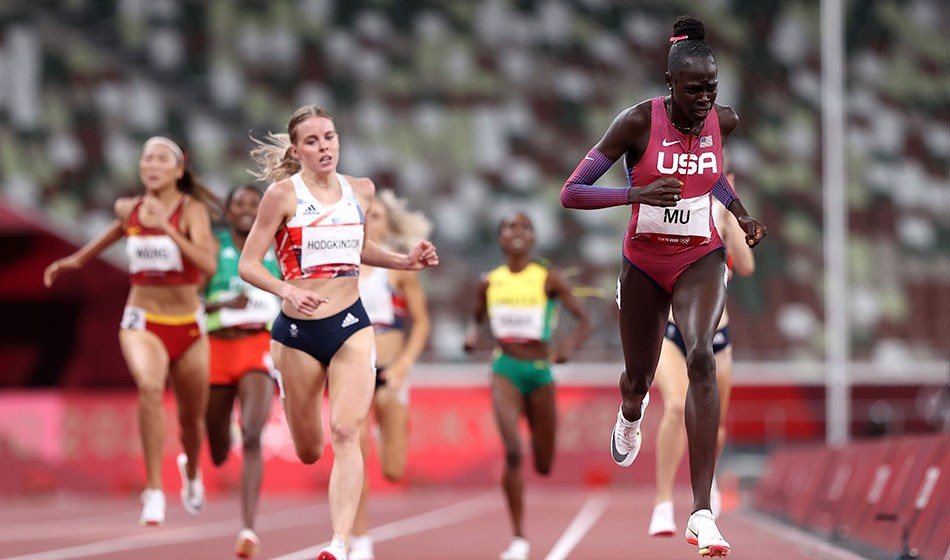 This was Hodgkinson’s first Olympics but, due to Covid-19 regulations, it was much different to Rio 2016 with no crowds in the stadiums and athletes ordered to return home just two days after they had finished their event.

Even so, she had worked with her coaches Trevor Painter and two-time world bronze medallist Jenny Meadows to focus on seeing the rounds as any typical 800m race.

“The Olympics was a whole new audience and I tried not to think that. Jenny and Trevor told me it’s just another 800m in a new stadium and you’ve just got to run that distance,” Hodgkinson tells AW. “I didn’t want to think about how big the occasion was because I didn’t want to waste energy on that. When it was all done, then that feeling of the Olympics stage came in.”

On receiving the silver medal and the reaction to her achievement, the 19-year-old adds: “I got the medal and then I had an interview with Greg [Rutherford] and I had to hold the medal as it was so heavy and hurting my neck a bit!

“Alesha Dixon and Mo Farah messaged me! Jessica Ennis was a big factor for me when I was younger moving to athletics, as I used to swim, and she congratulated me which was weird. There’s also a video of my family watching it when my sister cried. She doesn’t cry!”

One person instrumental to Hodgkinson’s success has been millionaire tycoon Barrie Wells, who sponsored her last year when she missed out on British Athletics funding via their world class programme due to the pandemic. 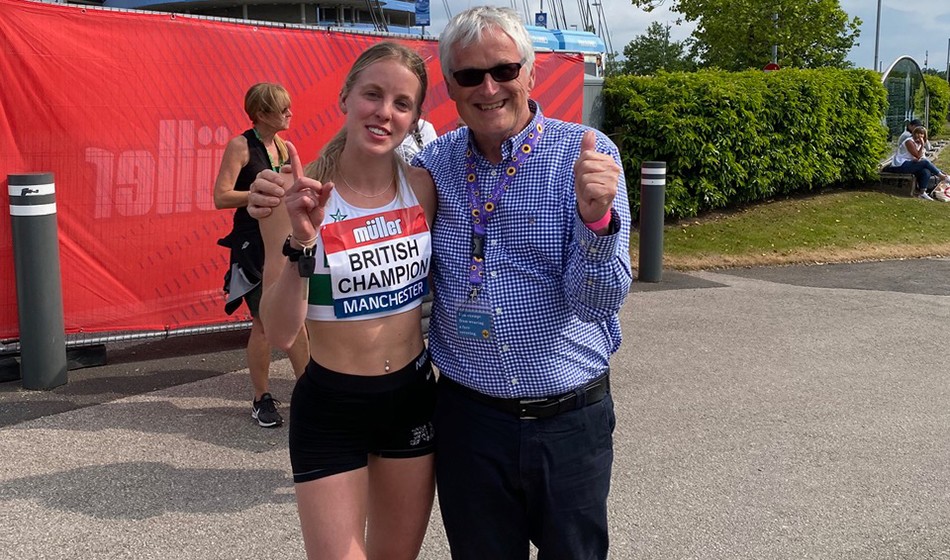 When each season ends, Wells is well known for fulfilling promises based on success and Hodgkinson, being a fan of vintage cars, wanted to drive James Bond’s Aston Martin DB5.

After she made the final and won silver, she travelled down to Aston Martin’s headquarters in Milton Keynes and got that opportunity.

“It was the coolest thing I’ve ever done in my life,” she beams. “We found out at first that you had to be 25 to drive it and we were like, ‘oh okay’. Then after Tokyo I think a TV presenter tweeted them and Aston martin got in touch to say I could drive it.

“That car is worth £3.3m and it had all the gadgets and it was the only one out of 25 in the world that was road legal.”

How it started: How it's going:

The next step for Hodgkinson is to take a well-deserved break before planning a hectic 2022 schedule with the World Championships, Commonwealth Games and European Championships all taking place over a packed six-week period.

“The Commonwealths are a priority as I want to experience the home crowd in Birmingham,” the teenager says. “I’m going to do the World Indoors in February. That’s the first aim and then outdoors at the minute I’m going to focus on the worlds and the Commonwealths.”

She also has a side goal.

“Maybe at the Commonwealths but a lot of our 4x400m girls are English! Three quarters of the Americans’ 4x400m team in Tokyo didn’t even run 400m flat and I feel like it would be quite cool to do.”