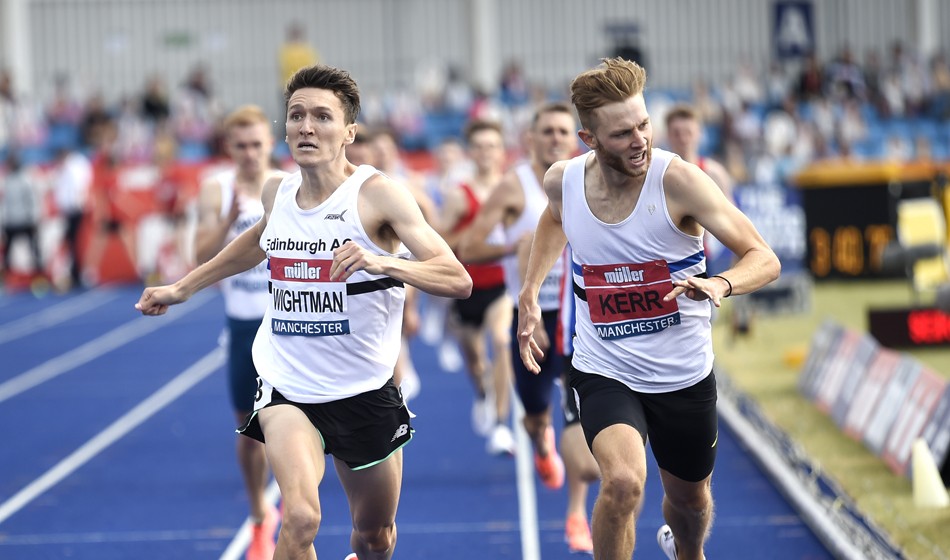 Edinburgh athlete wins from clubmate Jake Wightman as both make sure of Olympic places. Butchart, Bird and Pratt are also heading for Tokyo

Josh Kerr edged out Edinburgh AC clubmate Jake Wightman in what proved to be a compelling men’s 1500m final on the second day of the Müller British Championships in Manchester.

This had been billed as one of the events to watch this weekend and so it proved as the outcome came right down to the wire.

The America-based Kerr had clocked what was a then world lead of 3:31.55 at the beginning of the month and he had to summon all of his speed to see off the European and Commonwealth bronze medallist, winning thanks to a closing 300m of 37.8 seconds and his lean for the line which gave him a time of 3:40.72 to Wightman’s 3:40.77. Both secured automatic qualification for the Olympics in the process.

What had been a cagey, congested affair suddenly began to splinter after Jake Heyward led the field through the bell in 2:49.29. Kerr made his move towards the front from around 300m out and took the lead with half a lap to go. Wightman went with him and the 2019 World Championship finalists matched each other stride for stride.

Third place went to Heyward in 3:42.41. With the Welshman also holding the Olympic qualifying standard, the selection for the third member of the British team in Tokyo will be intriguing.

Asked what victory meant to him, Kerr replied: “A lot. It’s a lot of hard work, dedication, a good team around me. I couldn’t muck up today because everything had gone perfectly in the build-up so I can’t be anything but over the moon.

“I was able to dip him [Wightman] on the day but we’re at a pretty similar level. Myself and Wightman are ready to medal [at the Olympics] and I think it’s pretty evident we’re in a great position.”

Wightman, who won his sixth British Championships medal but has yet strike gold at these championships, said: “I am very pleased with that. I obviously just wanted to qualify and it is exciting to see Josh run well as well.

“It wasn’t as smooth as it could have been today. I have got some work to do now we can at least make plans. There will be some strong performers out there but myself and Josh will be in there amongst them.”

With the times falling outside of the mark for Olympic qualification of 4:04.20, Snowden is the only athlete in the Manchester field with the standard and with European champion Laura Muir certain to be included, the Olympic selectors have a dilemma on their hands. 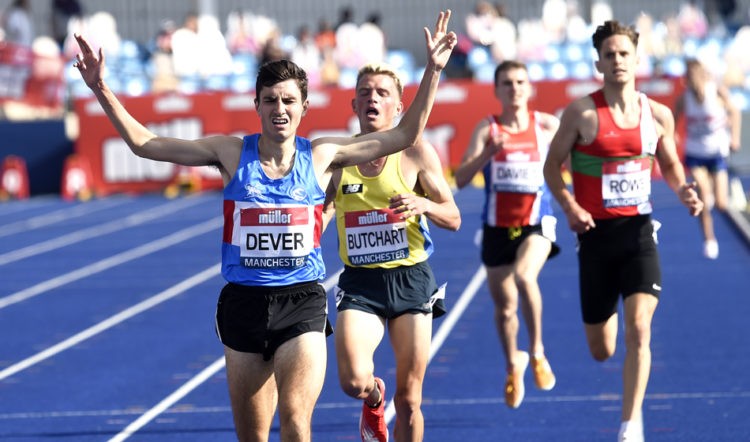 Another US-based athlete, Patrick Dever, continued his brilliant form by taking the first senior British title of his career a in the men’s 5000m.

Lizzy Bird, who competed in the 2019 World Championships, booked her place at another major championships, winning the British women’s 3000m steeplechase in 9:35.96 from local favourite Aimee Pratt’s 9:39.72.

Both already had the Olympic standard and will now prepare for Tokyo. Sarah Tait was third in a time of 10:03.58.

800m battles not to be missed

The men’s and women’s 800m finals, which take place on the final day of competition, look set to live up to their pre-championships billing, if the qualifying heats are anything to go by.

There was little to split the men’s finalists. Oliver Dustin won a fiercely contested opening heat in 1:47.74, ahead of Ben Pattison’s 1:47.87 while defending champion Daniel Rowden cruised through in heat two in 1:47.49, with Kyle Langford second in 1:47.55.

Reekie’s training partner Laura Muir was in total control of heat two, which she won in 2:05.41 from Ellie Baker’s 2:05.68, while Alex Bell (2:05.79) and Keely Hodgkinson (2:06.03) took the final automatic qualifying places when finishing first and second in heat three respectively.