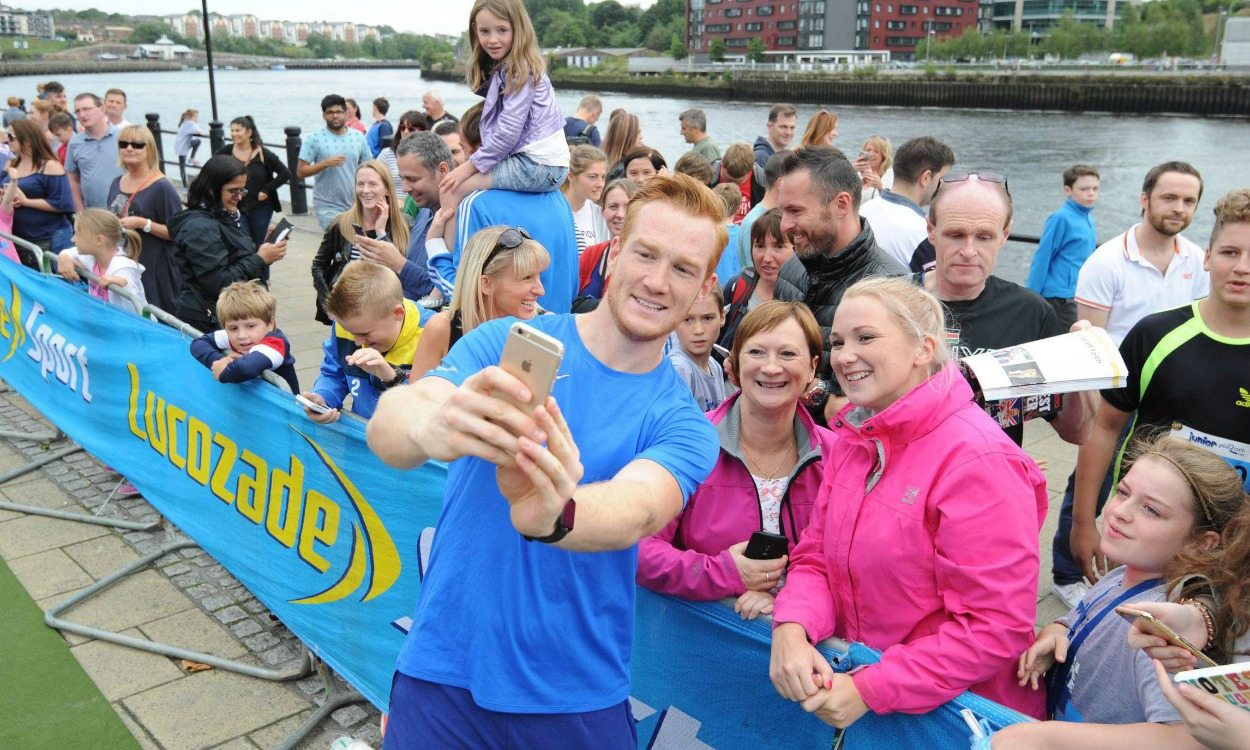 Hours after Saturday’s Great North CityGames had come to its conclusion, Greg Rutherford waited around signing autographs, taking selfies and just generally pleasing the masses as he has done so consistently throughout 2016.

From his early afternoon competition, to then fulfilling countless media duties and making time for each fan who had come to show their support as he closed out his season, Rutherford headed straight off to dance practice with Strictly Come Dancing partner Natalie Lowe.

This, after a year of splitting his time between Phoenix, Arizona, and his home in Buckinghamshire and a competitive season which began in New Mexico back in February and ended at the Newcastle and Gateshead Quayside. All in all, Rutherford’s schedule has been non-stop.

“It’s not been a bad year. I set a British indoor record to start off which was quite good. I broke a few stadium records this year, won a European Championships and got an Olympic bronze medal,” Rutherford says.

An Olympic bronze medal for 99% of the world’s athletes would be an unquestionable achievement, but Rutherford’s championship record – one Olympic, one world, one Commonwealth and two European golds – allows him to have the mentality of that final 1%.

The overwhelming disappointment the British long jump record-holder held in the immediate aftermath of his Rio Games has faded over the weeks, allowing him a bit of perspective. But Rutherford’s frustrations continue to remain.

“It’s not bad but ultimately we’re defined by how we do in the Olympics, so that‘s why it’s ended as quite frustrating,” he concedes. “There are always positives. It’s great to have won my second European title on the trot. But I was there to win the Olympics this year if nothing else, so it will always be a marginal disappointment.”

A more typical off-season may well have seen Rutherford go on holiday with his young family or, as he had been planning to do, “do nothing and get fat” but the constant physical requirements of hurling himself around a dancefloor over the next few weeks have negated the threat of a serious lack of conditional deterioration.

Rutherford has had his share of injury woes this year after suffering from appendicitis earlier in the year, followed by two adductor tears and whiplash which he says will have an everlasting knock-on effect on his hearing.

Learning to Tango or Pasa Doble may do little benefit for his jumping but US-based coach Dan Pfaff, who Rutherford will team up with in Texas around the start of 2017 to plan his World Championship defence, had no objection.

Rutherford adds: “Forget sand for a bit, switch it for glitter. And then I’ll come back next year. I’ll head over to America in around February or early March time. I’ll spend two or three months there then come back for the season.

“I’ll go and see Dan in Texas – not Arizona this time – and then here we go, we’ll start 2017. I’ll skip the indoors definitely and then see if I can retain that world title. That’s still very, very possible.”

He continues: “[The injuries] are not ideal compared to last year where I had no issues at all. I just had a fantastic year and managed to win a world title because I wasn’t injured and had no problems. It just so happens in an Olympic year it goes wrong but that’s life.”

With thanks to Strictly, the reigning world champion expects to remain in the best condition of his career over the winter.

“You’re sweating so much and working hard, I’m going to stay fitter in this period than ever before. Ultimately it’s for three months. I’ll then go back into training and then I’ll build back up again,” he says.

“I’ll take six months before I compete. I’ve got ready for major champs in six weeks before so I can’t see it being much of an issue.”

It’s a hectic autumn and winter for Rutherford, and a long time until jumping is again prioritised over jiving.