Favourites progress as European Champs get under way 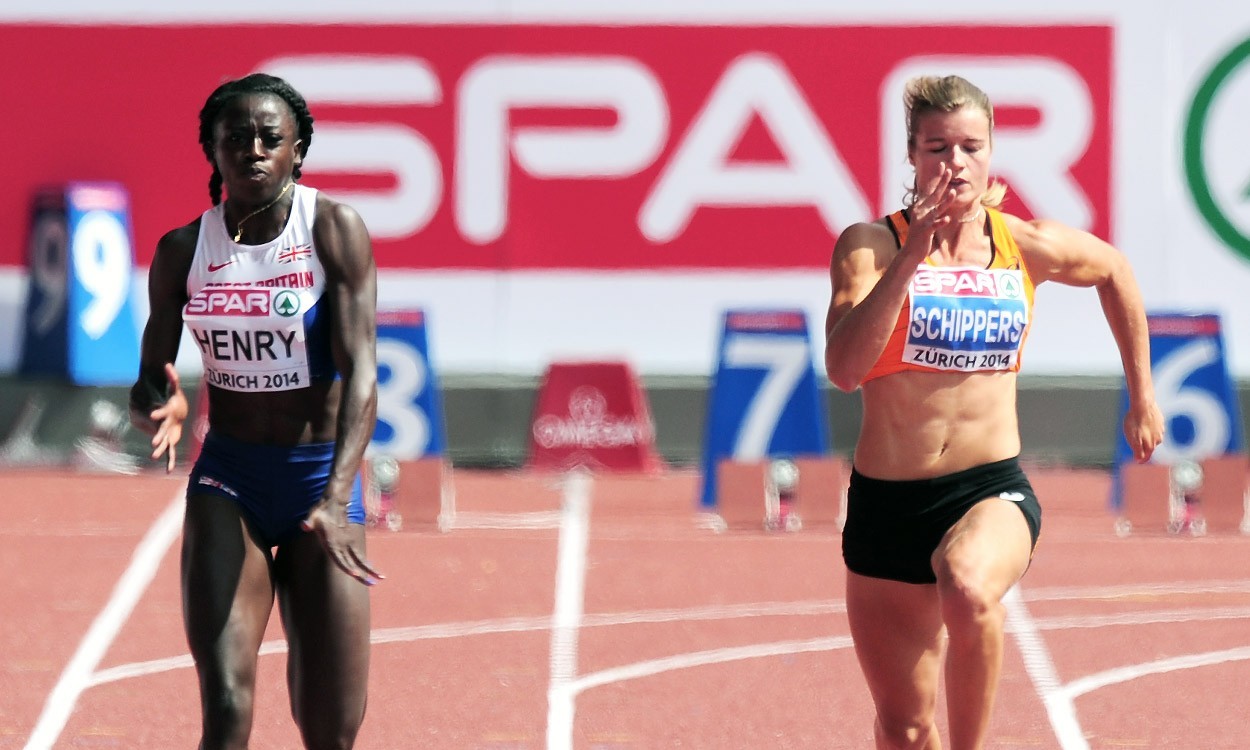 The Great Britain & Northern Ireland team captain led by example on the first day of European Championships action on Tuesday, Goldie Sawyers throwing the javelin 58.07m on her first attempt to better the automatic qualifying mark and secure her spot in Thursday’s final

“It’s just qualifying, it’s a necessary evil, but it’s done,” Sayers, who has returned this season after battling serious injury, told the BBC straight after qualifying. “That throw was terrible but it’s through so it doesn’t matter.”

She’ll be joined in the final by the likes of Germany’s 2010 European champion Linda Stahl and world record-holder Barbora Spotakova, the pair throwing 59.42m and 59.99 respectively in the first round.

GB’s female 100m runners proved they mean business in Zurich too, the trio all finishing in the top two of their respective heats – Ashleigh Nelson and Desiree Henry with personal bests to boot.

Four-time medallist at the European Championships Myriam Soumaré of France ran the fourth heat hard to clock an equal personal best and world-leading 11.03, the quickest time of the first round and the second-quickest time at this stage of the competition in European Champs history. Heptathlete Dafne Schippers is focusing on the sprints in Zurich and ran the second quickest time of the heats with 11.10 to win the second race from 18-year-old Henry who ran 11.21. Nelson clocked 11.19 and the GB pair will be joined in the next round by Asha Philip who ran 11.28 .

All three British athletes progressed in the men’s 400m too – Martyn Rooney dominating his heat to clock 45.48 for the second quickest time of the first round behind Russia’s 2010 European 4x400m relay gold medallist Maksim Dyldin with 45.45. Matt Hudson-Smith, who clocked a big PB to dip under 45 seconds at the Sainsbury’s Glasgow Grand Prix last month and then anchored England to 4x400m gold at the Commonwealth Games, won his heat in 46.07.

“There’s a lot more in there,” Hudson-Smith said after his race. “It’s just about getting through the rounds.”

Conrad Williams ran 45.90 to finish third in his heat behind Poland’s Jakub Krzewina, who improved from a previous best of 46.51 from 2011 to clock 45.11 twice this year. He ran 45.68 on Tuesday ahead of Ricardo Dos Santos with a 45.81 Portuguese record to run sub-46 seconds for the first time.

Laura Weightman and Hannah England both secured their spots in Friday’s 1500m final alongside the likes of favourites Sifan Hassan of Netherlands and Sweden’s Abeba Aregawi, though Laura Muir was unable to make up for the disappointment of missing out on a medal at a home Commonwealth Games as she finished sixth in the first heat and her time of 4:14.69 wasn’t enough for her to progress as a fastest loser.

World bronze medallist Tiffany Porter managed 12.69 into a 2.0 m/sec headwind to win the final 100m hurdles heat and later said how the mark is encouraging given that the run felt “pretty easy”. French record-holder Cindy Billaud won her heat in 12.75 (-1.5). Over in the men’s 400m hurdles and Britain’s Niall Flannery, Seb Rodger and Tom Burton all advance along with the likes of Rasmus Mägi, Thomas Barr and Denis Kudryavtsev who like Flannery have all dipped under 49 seconds this season.

One of the favourites for a medal in the men’s steeplechase, Victor Garcia, suffered a nasty fall in his heat and knocked himself unconscious after his knee hit the final barrier and he crashed heavily on to the track. He had looked ready to claim one of the five automatic qualifying spots in that first heat, too, with Britain’s James Wilkinson’s European hopes also coming to an end – his 8:39.78 marginally not enough for a fastest loser spot. Poland’s Mateusz Demczyszak went the quickest with 8:31.62.

Shot favourite David Storl of Germany cruised through to the next round of the competition along with the likes of Poland’s Tomasz Majewski. Lisa Ryzih from Germany, Ekaterini Stefanidi from Greece and Anzhelika Sidorova from Russia are the only three European pole-vaulters to have cleared 4.70m outdoors this year and they all progressed to Thursday’s final. Britain’s Julian Reid leapt a best of 16.52m in triple jump qualifying but he dropped to 13th to miss a place in final on countback as Russia’s Lyukman Adams went furthest with 16.97m.

Germany’s Arthur Abele leads the decathlon after three events with 2644 points after a 10.90 100m, 7.55m long jump PB and 15.39m PB in the shot. He currently leads a German one-two as behind him Kai Kazmirek sits on 2626 points. Britain’s Ashley Bryant, competing fresh from his Commonwealth silver in Glasgow, is 16th after three events with 2400 points.