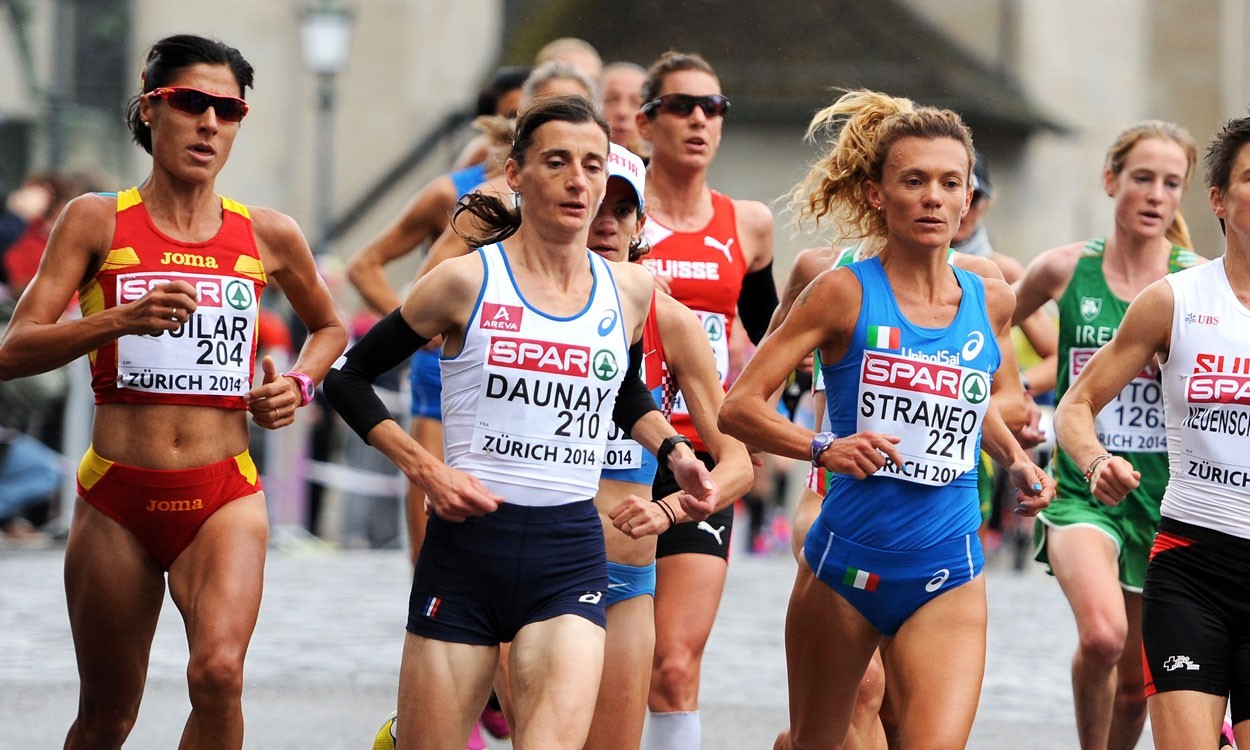 Daunay and Straneo by Mark Shearman

Christelle Daunay, 39, clocked a championship record of 2:25:14 on a hilly course in Zurich to win marathon gold for France.

Despite being poised to turn 40 in December, Daunay dominated the race with fellow veteran, Valeria Straneo, before breaking away from the 38-year-old Italian in the final two miles.

Straneo, silver medallist in the IAAF World Championships marathon in Moscow last year, held on for silver in 2:25:27, as Jessica Augusto of Portugal clocked 2:25:41 for bronze as all the medallists beat the championship best of 2:26:05 which had been set by Maria Guida of Italy in 2002.

Daunay was 20th in the 2008 Olympic marathon and has placed third and fourth in the New York City Marathon, but she produced the performance of her life in Zurich as she came close to her national record of 2:24:22 on a testing city centre course that was lined by a sizable number of fans.

“I did it! I highlighted a beautiful career with the most beautiful medal,” said the winner. “I am very satisfied. The race was really fast. It was not easy, the time shows it. I had to be there, I had to be patient. I knew that I must rather attack when we were going down the hill. And this is what I did on the last lap.”

Paying tribute to her closest rival, she added: “It was so hard to get ahead of Valeria. The race was perfect – tactically and time-wise. Some weeks ago I would not have thought that such a thing was possible, I rather went ‘Oh, là là’ about the course.”

They did not fall back as much Nicola Spirig, though, as the reigning Olympic triathlon champion from Switzerland made a plucky effort to mix it with the specialist runners. Competing in front of her home crowd, she ran with the leaders for the first 10km before eventually drifting away to finish 24th in 2:37:12.

Other notable athletes included Fionnuala Britton – the Irishwoman running a respectable 2:31:45 in 10th on her debut over 26 miles – while Jessica Draskau-Petersson, who placed eighth in a 2:30:53 lifetime best representing Denmark but has dual nationality with Britain and competes for Stragglers Running Club in London.

>> See the August 21 issue of Athletics Weekly for full coverage