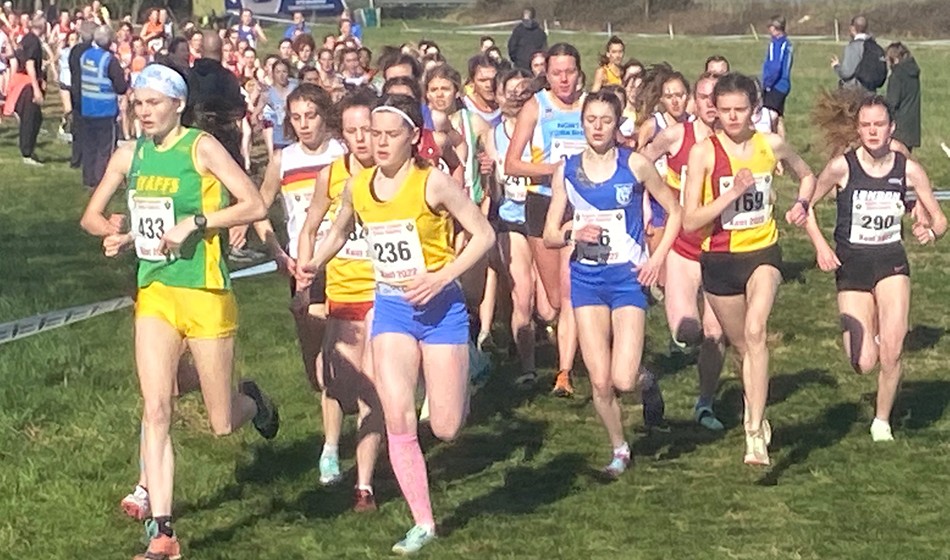 The English Schools Athletics Association (ESAA) may be looking for funding but what it does have is a thriving cross-country championships.

Big crowds flocked to the Hop Farm near Paddock Wood on a beautiful sunny day and there were six excellent races on the flat fields surrounding the tourist spot for the 61st running of the event.

Everyone was mightily impressed in the way Kent hosted the event at a venue that’s previous biggest race was a Kent Schools event but they had not enjoyed a huge amount of success until the sixth and final race which was won by Louis Small.

The event was easily the day’s longest race, though the leading athletes didn’t seem in too much of a hurry as it resembled a tactical track race with the athletes easing into a strong easterly wind.

As the group headed out on the third lap, you probably would have favoured Anglian Schools champion Alex Melloy, a 3:45.90 1500m performer who was third in the European under-20 3000m last summer even though he had only been 18th in the English National last month.

Small was reminded of Melloy’s superior 1500m speed on the last lap and so he (with a best outside four minutes) launched a furious kick 600 metres out and was delighted to win his first English Schools title.

It follows another good season having been third in both the Inter-Counties and Southern Championship races. 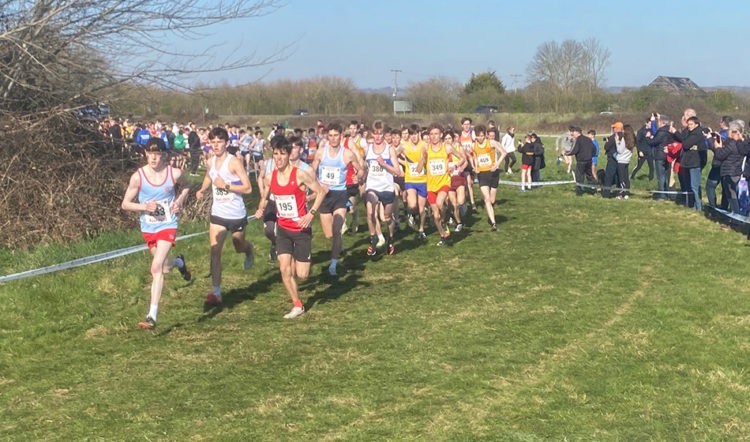 He only won by five seconds though as Melloy chased hard all the way with the 2020 intermediate champion Fraser Sproul, who had avoided many of the major events but won the Northern Schools title, taking bronze.

Small said: “I heard them shout about Melloy’s 1500m time mid-race so I knew I couldn’t wait for the end but when I went and he was still hanging on and I had to go again. I am very pleased as I was third and second in my previous two English Schools races but I have had a good season but this is my best win ever.”

Small’s twin brother Jack came seventh, just one place down on his Inter-Counties run at Prestwold Hall earlier this month and with Matthew Taylor 13th and all their six scorers in the top 53 (and a seventh in 58) Kent won by a huge 118 points. 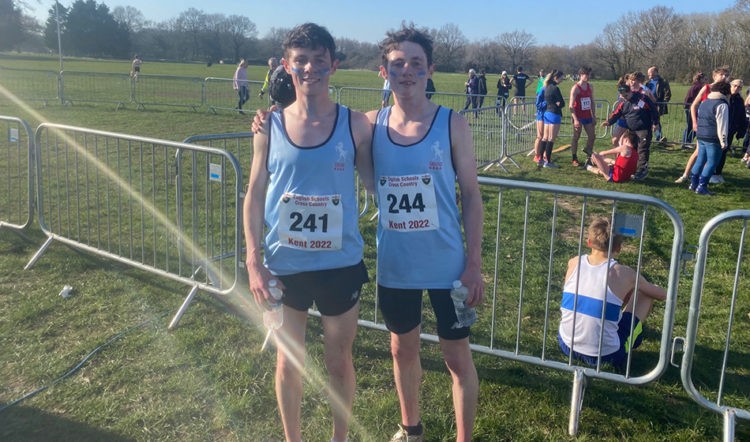 Louise Hackett has had a good season – second in the Midland Championships and a bronze in the Inter-Counties event – but she wasn’t the favourite in what looked a loaded field.

However, what she had done this winter is run a PB 1500m and finish sixth in the British senior championships and she used her speed from the start to build an early lead.

Many expected the Inter-Counties top two of Pippa Roessler and Ellen Weir to close the gap but neither really got on terms and Hackett won comfortably by 12 seconds. She had been 40th two years ago in the intermediate girls’ race.

She said: “I wanted a medal in my last Schools race and it’s great to go out with a bang and this fast course suited me and I am really pleased to pull it off. I wanted to hang on after that fast start and not look stupid but my lungs were burning at the end.”

A surprise second was South West Schools runner-up Megan Hornung who had finished fifth in the younger under-17 age group in the English National.

There was also a surprise third with South West Schools bronze medallist Kaitlyn Sheppard, who had only been 21st in the National and 10th in the Inter-Counties.

Weir finished fourth to complete the most consistent of seasons that has seen previous medals in the National, Inter-Counties and South of England races as well as a European 14th place in December.

The 2020 intermediate silver medallist Kiya Dee was eighth while Emily Shaw, who had beaten Hornung and Sheppard in the South West Schools race, was ninth.

Roessler couldn’t match her Loughborough form and was 11th but along with Weir she did gain a team gold with their team completed in 112th place.

Curiously in this day of equality the senior girls ran the same distance…..as the junior boys! 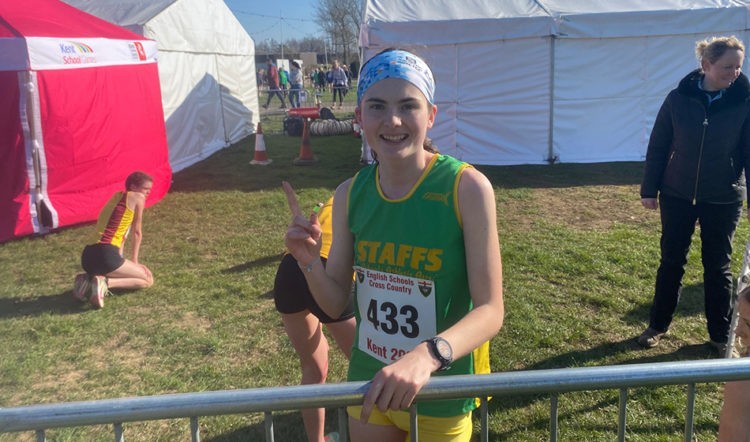 Inter boys: Pye in the sky

As so often in this age group a very good first year under-17 athlete can beat a great second year under-15 athlete and that’s what happened here to Durham’s Brandon Pye.

The Northern Schools champion had been runner-up in the Northern Championships and had been fourth in the Inter-Counties race and ninth in the English National but he pulled away for a clear seven-second victory over James Dargan.

Pye said: “At the start of the second lap I pulled out a 10-metre lead but I felt James close the gap a bit so at the last turn turn I gave it everything and pushed all the way to the line. I thought coming fourth in the CAU (Inter-Counties) I had a chance but it’s the biggest win I’ve ever had.” 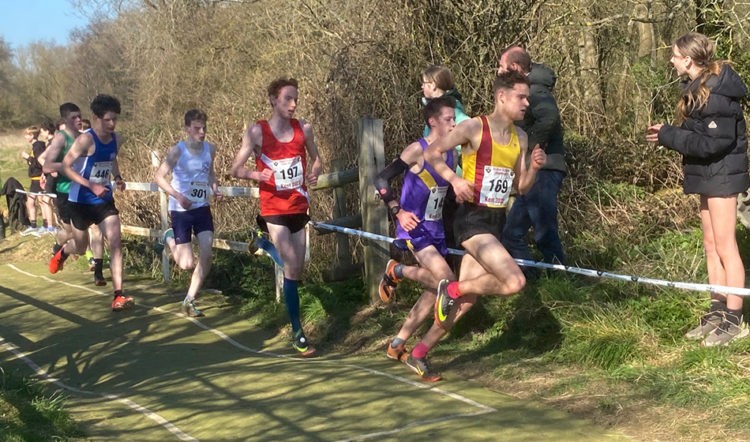 It was close for second with Dargan, 11th and 13th in the CAU and English National who edged it.

Third was Robert Price, who will be a big favourite next year having won the under-15 races in the Inter-Counties, English National, Northern and Liverpool races.

A less predictable fourth was Midlands champion Alex Adams who showed far better form than his 18th place in the English National and 103rd in the Inter-Counties race.

Fifth was was former National under-13 champion Alden Collier who had only been 333rd in the 2020 English Schools race.

It was the closest team race of the day as Sussex beat Kent by a single point as they completed their scoring in 78th with Kent having to wait for 89th. 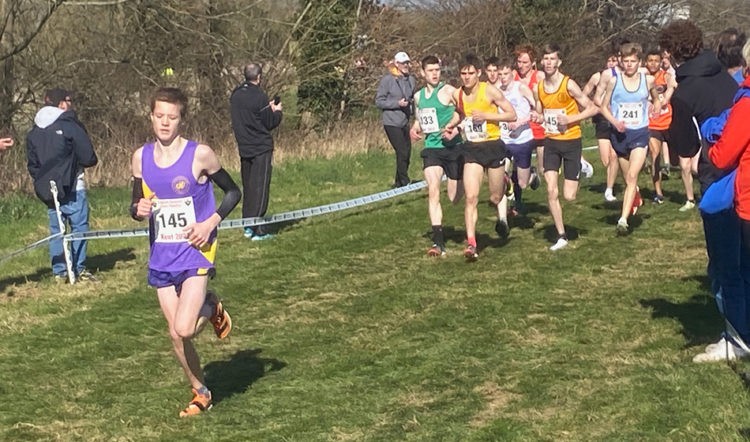 Brandon Pye on his way to inter boys gold

This race was first off and there was no surprise winner here.

In 2022, Bailey has shown even better form. She won the Northern and English National titles in style and was second in the Inter-Counties Championships to Scot Hannah Ryding and was the clear favourite here.

It wasn’t as comfortable as the form book suggested, though. Innes Fitzgerald of Devon was only 176th two years ago and since then has just done the Seaton parkrun other than venturing out to the Devon Schools and the South West Schools which she both won. A 17:25 parkrun PB the week before must have helped her confidence and she did open a small gap but eventually Bailey got back and a late move got the Cumbria athlete clear to win in 13:12.

“That was horrible” she said. “I am a foreigner from Cumbria so I much prefer hills and mud. It was fast and I just picked a point 400 metres out and went for it.” 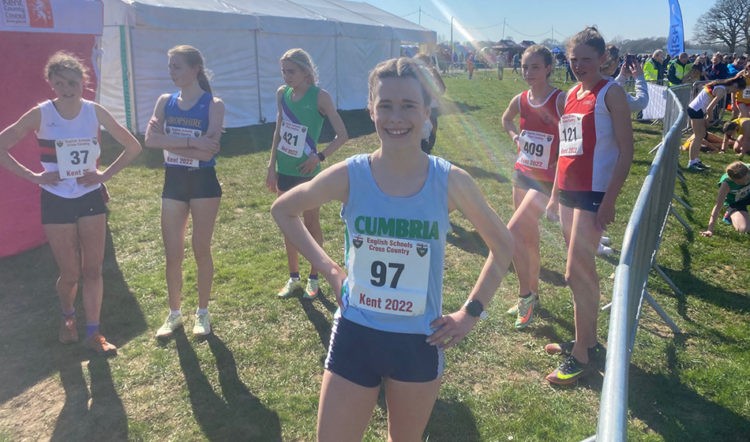 Though she lost the Inter-Counties race, she actually said she enjoyed her battle with Ryding and despite her success on the mud, it’s worth remembering she is the reigning English Schools and English under-17 champion at 3000m.

Fitzgerald was nine seconds back while Sophie Nicholls, who was third in 2020 and seventh in the Inter-Counties, took third.

Gilbody couldn’t win her second English Schools title but was a solid fourth.

Buckinghamshire, led by Hughes, were surprise winners with their final scorer 92nd. 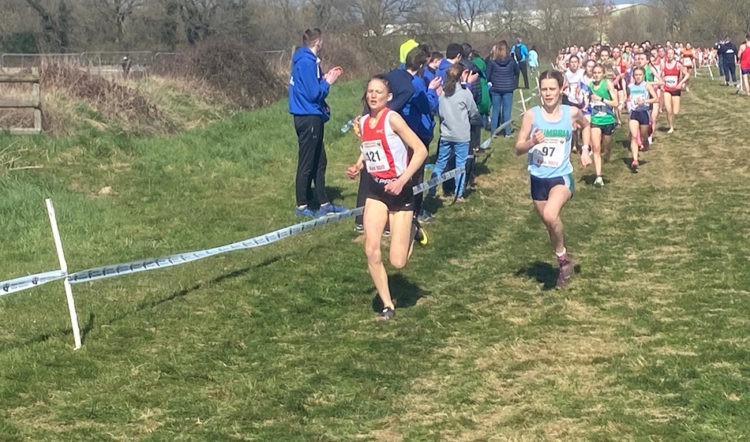 Jake Meyburgh has been virtually unbeatable all season. He won the English National, Inter-Counties and South of England titles though it’s probably his 15:57 parkrun at the age of 12 which psyches his rivals out the most.

He wasn’t favourite here though as he was up against older athletes and he was beaten in the Surrey Schools by Alex Lennon. The latter had been the best first year in the English National (fourth) and Inter-Counties (fifth) and was most people’s favourite.

Lennon was quickly to the fore and Meyburgh settled behind but he made a move and stretched his long legs in the closing stages and won by eight seconds. 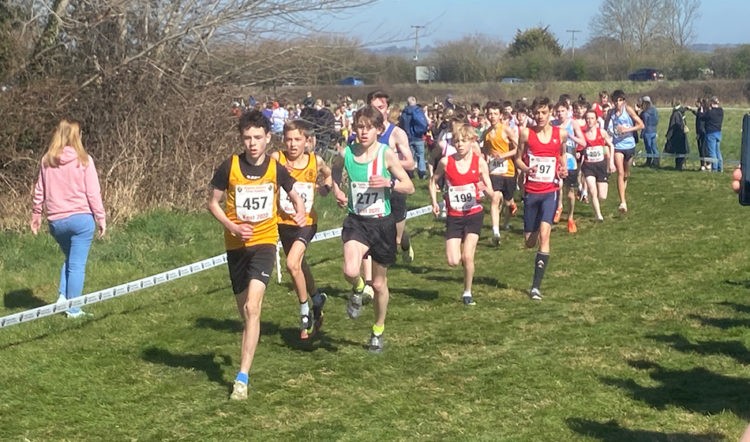 Meyburgh said: “I thought Alex might beat me after the Surrey Schools but I followed him and thought as I am smaller that the wind might affect him more but I really pushed on near the finish. It was flat but I prefer fast courses.”

The Hampshire/Isle of Wight athlete Archie Pearson was one of those athletes who unhelpfully missed the major events this winter but he had been second to Lennon in the South East Inter-Counties and a 16:26 road 5km last year showed his talent should not have been overlooked and he took third. 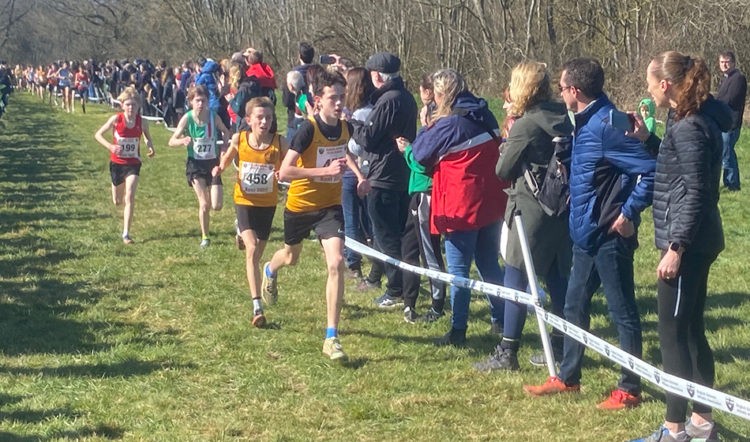 Isaac Stabler, only 37th in the Inter-Counties under-15 race, was another relative surprise though Inter-Counties under-13 bronze medallist Will Birchall who won the Cross Challenge races at Cardiff and Milton Keynes at the start of the winter, confirmed his good form and like Meyburgh can run in this race next year too as can Northern under-13 champion Evan Grime, who had been fifth in both National and Inter-Counties races.

Despite their top two, Surrey lost out in the team race to both Hampshire and Essex with Hampshire closing in 104th. 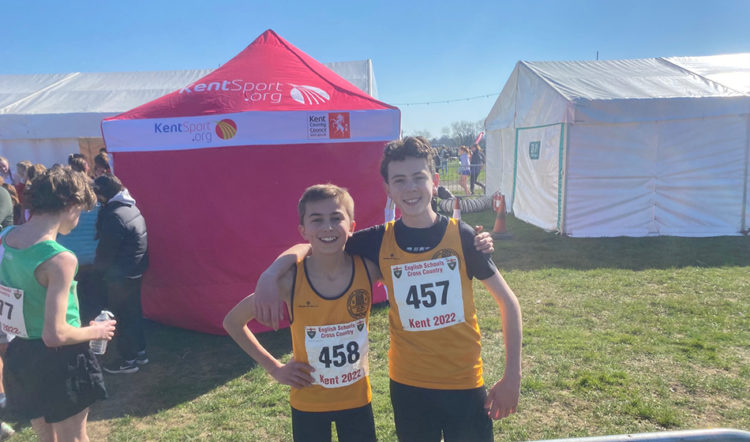 Junior girls: King for a day

Shaikira King set a UK age group indoor mile record last month and she used that speed to blast to an early lead.

Having had a good season in the under-15’s – having been fourth in both the National and Inter-Counties – she took over the title won by her Wreake Valley club-mate Gilbody two years ago.

King said: “I started fast and led all the way and loved the course. I’m looking forward now to running 800m and 1500m races during the summer.” 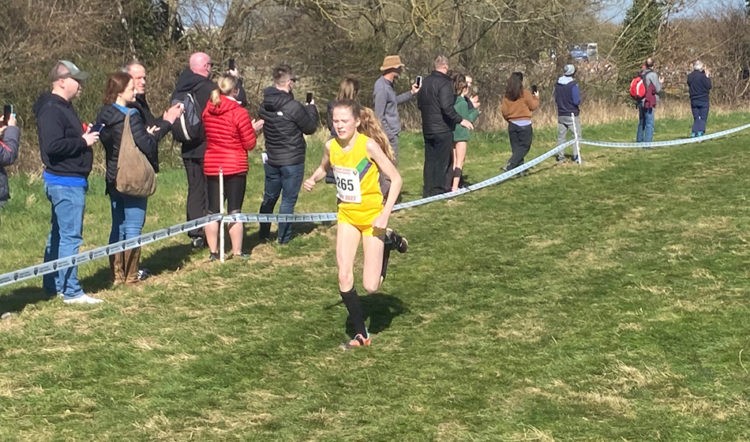 Shaikira King on her way to junior girls gold

She only won by three seconds in the end though as Midlands bronze medallist Isla McGowan, eighth in the Inter-Counties race, was a strong second.

Isabella Waugh had beaten the top two in winning the National and in the Inter-Counties but was probably better suited to the mud and hills of Parliament Hill and Loughborough rather than the flat plains of the Hop Farm.

English National under-13 champion Katie Webb was 10th and will be among the favourites in this age group next year.

Pye led Surrey to an easy team win in another Southern dominated team event as they closed in an impressive 62nd. 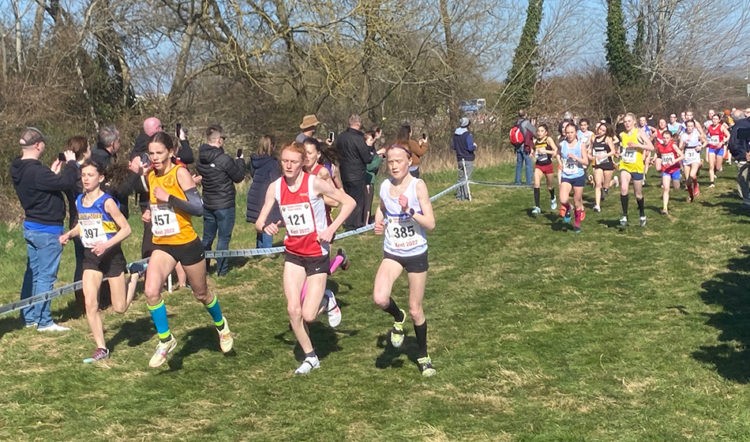